Harley-Davidson outlines vision for the future 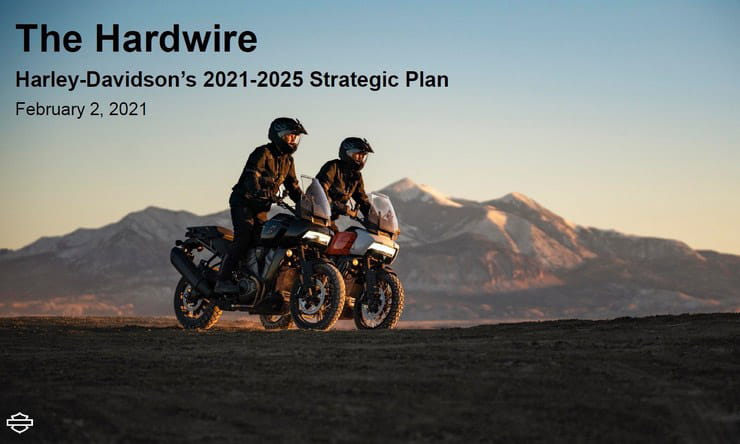 Back in July 2018 Harley-Davidson unveiled an incredibly ambitious and detailed plan for its future – confirming 16 new water-cooled models from 500cc to 1250cc in an array of styles, a new small-capacity machine, huge electric bike expansion plans and a reinvented shopping experience. It was a multi-year, multi-pronged onslaught that was intended to expand the firm’s reach away from its cruiser comfort zone and bring huge new opportunities.

Now virtually all those ideas have been dropped with the unveiling of Harley-Davidson’s new ‘Hardwire’ strategy, which replaces the previous ideas of bold expansion into uncharted territories with a renewed focus on the firm’s core touring, cruiser and trike segments and established, wealthy markets.

The change isn’t unexpected. Harley CEO Jochen Zeitz has been taking the firm in this direction with his interim ‘Rewire’ strategy since last year when he replaced Matt Levatich at the firm’s helm. The ambitious 2018 strategy, which had been dubbed ‘More Roads to Harley-Davidson’ and intended to see the firm through to at least 2022, was Levatich’s brainchild and Zeitz immediately reversed course on taking over. 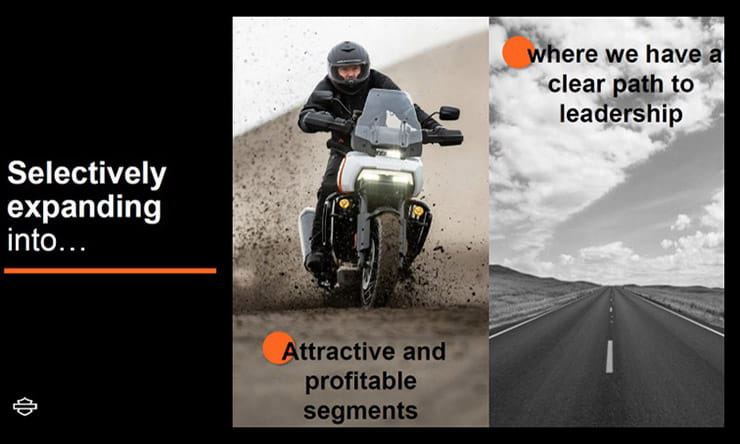 Harley’s new plan isn’t as attention-grabbing as the ‘More Roads’ strategy but it’s a play-it-safe route that’s intended to bring the firm back to growth and sustained profitability after a few tough years culminating in the coronavirus pandemic that saw sales volumes and incomes slashed in 2020.

On the surface it’s easy to see the Hardwire as a step backwards. After all, in an ideal world the ‘More Roads’ plan, which would have brought Harley into completely new fields including adventure bikes, naked roadsters, even sports bikes, could have transformed the company’s image. However, that might be a rose-tinted view to take.

Sure, expansion is a good thing, but the risks were at least as big as the potential gains. After all, every one of the new markets that ‘More Roads’ proposed to enter was already populated by other manufacturers, all with years of experience and product development focussed on those fields. Just as firms like Honda or BMW have always struggled to get a foothold in Harley’s cruiser territory, the chances are that H-D would have hit rocks in its efforts to muscle in on markets dominated by others. Worse, the focus on new goals brought the risk of Harley taking its eye off the ball in the US cruiser market that it dominates, opening the door to rivals who’d be only too happy to take a slice of that pie. 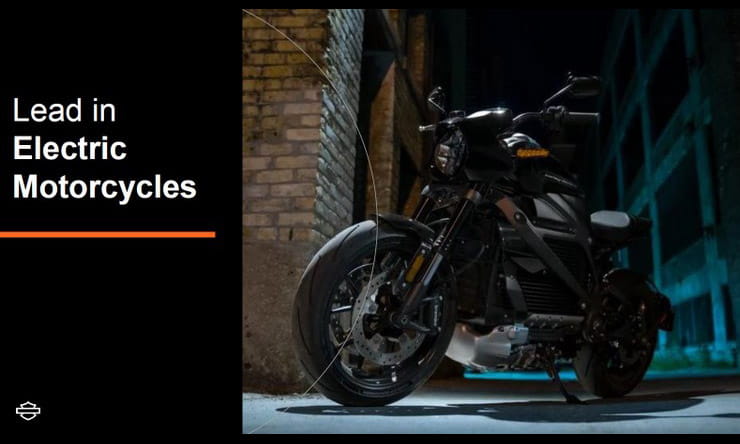 So what are the ‘Hardwire’ ideas? According to the firm, the first priority is profit. Not something that customers might want to hear – after all, it’s their money that goes into those profits – but shareholders will no doubt be happy.

The route to more profit is, according to the plan, strengthening Harley’s position in the touring, large cruiser and trike segments. In other words, focussing on the bikes that the company already sells rather than putting all its hope into potential future products.

Next up comes ‘selective expansion’, with the focus on the headline model from 2018’s plan that has survived the cull – the Pan America adventure bike. Virtually every bike firm on the planet has looked on with envy as BMW romps from sales record to sales record with successive generations of the R1250GS, and it’s a market that Harley believes it can take a bite from. The bike’s full reveal will come later this month along with more news of another survivor of the ‘More Roads’ plan, the as-yet-nameless cruiser that bears the same water-cooled Revolution Max engine that debuts in the Pan America.

Electric bikes – a field that Harley has become an unlikely leader in after the development efforts that went into the LiveWire – will also play a part in the firm’s future. Harley is creating a separate division to focus on electric products, separating them from its main R&D efforts. During a conference call when the plans were announced, Zeitz suggested that the near-term future for electric motorcycles remained urban transport, perhaps a hint that the planned Harley electric scooter that’s been in development for a couple of years will be the next move in that direction. 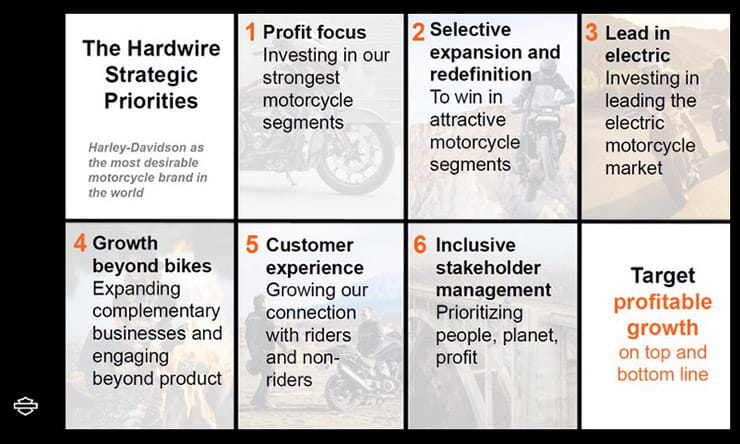 Elsewhere, Harley wants to grow its non-motorcycle business, the parts and accessories, merchandise and financial services arms of the company that have long provided a reliable back-up income stream. As part of this, the firm plans to create a used bike resale scheme – Harley-Davidson Certified – for customers who want a factory-approved second-hand Harley.

During the announcement of the Hardwire plan, Zeitz mentioned more than once that the firm is going to be staying quiet about upcoming models until their launches – a significant reversal from the ‘More Roads’ plan which set out a detailed roadmap of several years’ of planned model introductions and one that means in future the firm isn’t going to be in the uncomfortable position of cancelling bikes that it had previously announced. That’s exactly what happened with the Bronx streetfighter, which was pulled from the firm’s plans just months before it was due to go on sale, having again been part of the ‘More Roads’ expansion strategy.

It’s worth noting, however, that despite a renewed focus on the US market and established product areas, Harley’s extensive footnotes to its plan reveal it still intends to ‘develop and maintain’ a relationship with Chinese firm Qianjiang, which is developing the proposed Harley 338R small-capacity parallel twin, and a relationship with Hero MotoCorp in India, which will be distributing Harleys there and also using the brand’s name on Indian-developed products in the future.

The rest of Harley’s announcements today related to the firm’s financial performance in 2020, which was understandably deeply impacted by the COVID pandemic.