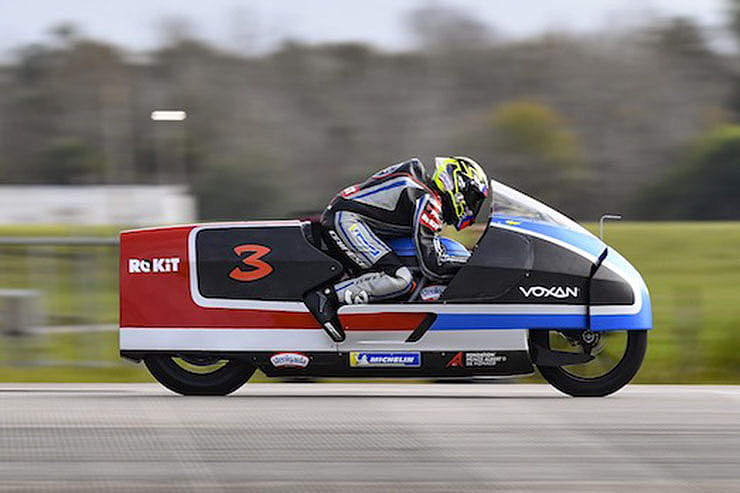 Over the course of six days spent at Space Florida’s Launch and Landing Facility at the Kennedy Space Center, Biaggi rode the Voxan Wattman to a verified top speed of 283.182mph (455.737km/h), scoring a world record in the ‘partially streamlined electric motorcycle under 300kg’ class.

It marks a sizeable improvement on its own world record - set last year also in Florida with Biaggi at the controls - of 253.5mph (408km/h) and throws down the challenge to British counterparts White Motorcycles, which had been attempting to break the erstwhile record with its unusual WMC250EV - as noted by the ‘250mph’ in the name - but will now need to find another 33mph to do so.

Indeed, the Voxan Wattman - designed by Sacha Lakic, who rather infamously penned the Bimota Mantra - topped out at 292.204mph, according to the team’s own GPS, but the final figure determined by the FIM must be taken from an average of two runs.

In addition, engineers removed the fairing and recorded a top speed of 229.675mph (369.626km/h) to set a new benchmark in the ‘non-streamlined electric motorcycle under 300kg’ class. 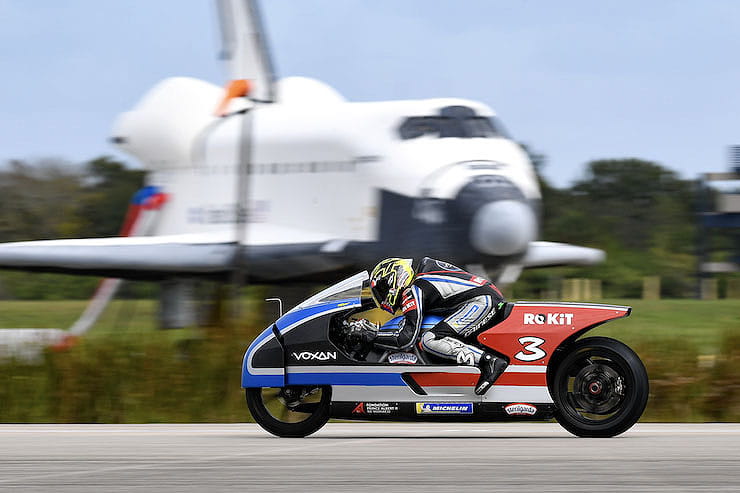 A mighty achievement for Biaggi, who clinched the 2010 and 2012 WorldSBK Championship titles with Aprilia, is a 42-time GP race winner and currently owns his own Moto3 World Championship team, the Italian says the sensation of having no engine noise gives him a fresh appreciation of the impact wind has on a motorcycle’s speed and stability.

“When you see the instruments signalling 470 kph you don’t believe your eyes. Even for a MotoGP racer used to pushing 300 kph, this is something extreme. At that speed, the track suit vibrates and burns your skin, your eyes cannot see well.

“There is so much turbulence that you think you can hold on, but you can’t. You don’t look anymore at what is straight ahead. You need to look wider. It’s crazy.”

“When you break the wall of the air, the wind creates a really big noise. The sensation is like driving into, and then through, a wall.”

Voxan is a French motorcycle manufacturer founded in 1995 that targeted the likes of Triumph with its Gallic-flair retro Roadster model, before the company was purchased by the niche sportscar firm Venturi Group in 2010 when it entered liquidation.

The Monegasque firm announced back in 2013 it planned to turn its attentions to electric powertrains long rivals would consider doing something similar, though it has since mostly focused on competing in the FIA Formula E World Championship since its inauguration in 2014, claiming the runners-up spot in 2021.

Voxan, meanwhile, was charged with leading the challenge for new electric motorcycle land speed records when the project began with the first generation Voxan Wattman in 2020.

“In less than a year, we have succeeded in lowering the motorcycle’s weight, while increasing its power and improving its stability,” said Venturi Group CEO Gildo Pastor.

“Following the records, we set in November 2020 in the ‘over 300 kg’ class, these 21 new records are another magnificent reward for the Venturi Group, for Max Biaggi, and for our valued partners, Saft, Michelin, and Mercedes.

“I am pleased to think that the experience gained from this project will contribute to improving ecomobility. I share these records with my country, Monaco, which does so much to promote sustainable development.”