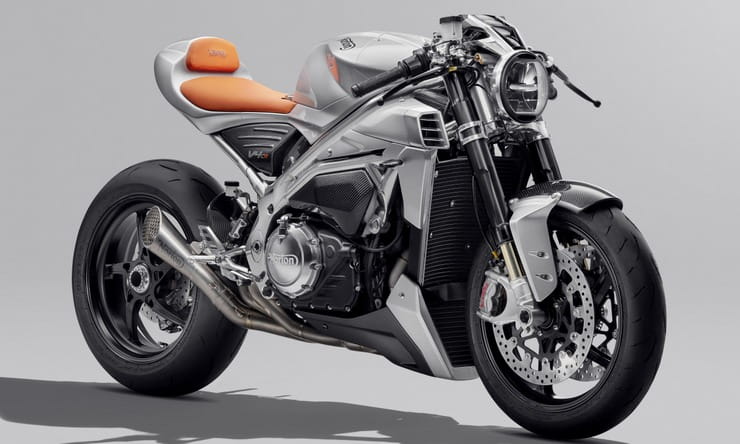 Norton faces an uphill battle to regain the goodwill lost under the name’s previous ownership but the new iteration of the company is out to prove it’s serious by revealing the next step in the evolution of its V4 – the V4CR café racer.

Coming soon after the unveiling of the V4SV superbike, a fixed and improved version of the flawed V4SS, the V4CR uses the same underpinnings but strips away the fairing. While Norton calls it a café racer, the formula is arguably closer to that of a streetfighter, with superbike power and handling but unfaired style.

Although still a prototype, so final specifications have yet to be hammered out, the bike features the same 185hp, 1200cc V4, designed by engine gurus Ricardo for Norton, that’s used in the V4SV. Although not as powerful as the brawniest of its rivals – and Ducati’s 208hp Streetfighter V4 is surely the closest competitor in terms of spec and layout – the bike outguns the Triumph Speed Triple RS, which manages 177.5hp from its 1160cc triple. 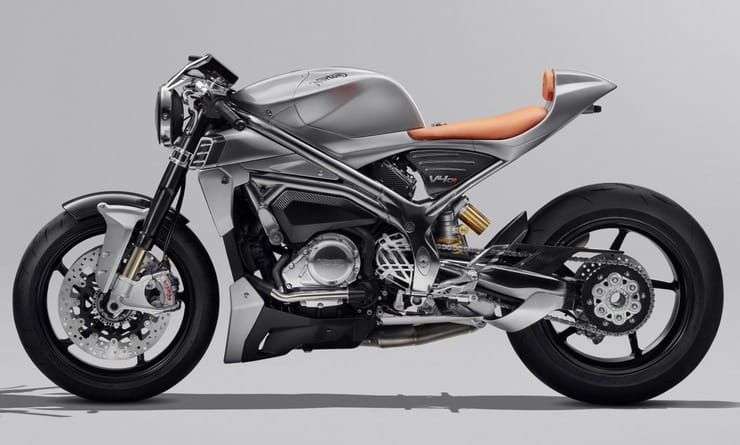 The changes go beyond simply removing the fairing from the V4SV. Norton has re-sculpted the V4CR’s tail, making it even stubbier than the superbike’s, and crafted new side-mounted air intakes and radiator cowls, along with a vestigial bellypan to hide the lower part of the rad and the exhaust. Along with blacked-out Ohlins forks instead of the V4SV’s gold ones, and a simple round headlight with a small cowl leading to the TFT instrument pack, the transformation is a successful one.

Unlike its more conventionally streetfighter-style rivals, like the Ducati Streetfighter, Triumph Speed Triple, KTM’s 1290 Super Duke R and Kawasaki’s Z H2, the Norton doesn’t swap the superbike’s clip-ons for wider, high bars. To achieve the desired café racer look, your hands stay low and the seat – a dedicated single unit with no pillion provision – is high. Whether that remains the case once the bike reaches production remains to be seen; café racers are often a triumph of style over everything else, with comfort and practicality sacrificed on the alter of good looks, and we can imagine Norton at least offering the option of wider, high bars for riders who want to be able to give their wrists a rest. It’s the same story with the pegs – the V4CR’s are identical to the V4SV’s, mounted high and set back, which bodes well for track use, less so for nipping down to the shops.

The frame is identical to the TIG-welded alloy design of the V4SV, as is the single-sided swingarm, and the prototype features the forged alloy Oz Racing wheels that are standard on that machine (carbon rims are also available on the superbike). The Brembo brakes are also direct carry-overs, and Norton says that under that silver paint, all the bodywork and the fuel tank are carbon fibre. 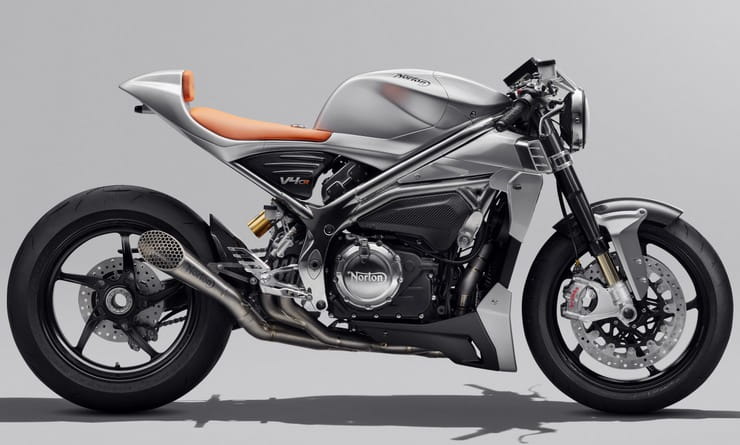 There’s no indication yet as to how soon the V4CR will leave the prototype stage and enter production, although given how many components are common to the V4SV superbike it’s unlikely to be a drawn-out development process to productionise the café racer version.

However, as on the V4SV superbike, it’s worth noting that every picture shown so far includes a track-only exhaust pipe rather than an emissions and noise limit-friendly road system, and there’s a distinct lack of indicators or a type-approval-compliant licence plate bracket. Under European rules – and British ones match them even after Brexit – the rearmost part of a production road bike must be bodywork, not the back tyre, so Norton will need to add either a very long numberplate hanger to the tail or opt for a swingarm-mounted design to carry the plate, as used on the handful of V4SS machines that reached customers before the previous Norton company folded in early 2020.

The V4CR is make its public debut at Motorcycle Live, which opens this weekend at the NEC in Birmingham.