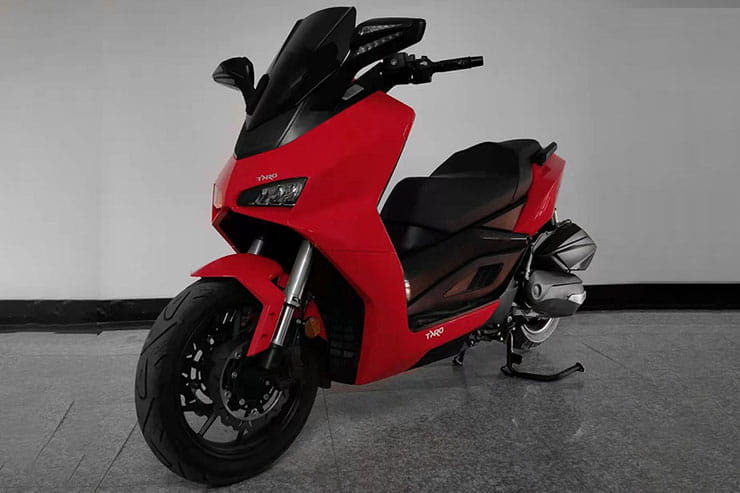 Taro might not be a motorcycle brand that’s familiar to many UK riders but several of the company’s bikes are strong sellers over here under the Lexmoto name. This is the next-generation Taro TR300T – a model that’s sold in the UK as the Lexmoto Pegasus 300.

Although the bike hasn’t been officially shown, it has been revealed in new Chinese documents needed to put the model on the market over there. The same paperwork also confirms several technical details of the machine, suggesting it’s a significant update under the skin as well as on the surface.

Visible alterations include the completely new bodywork, with a modern-looking, small-headlight face and bold single-colour panels that aren’t covered in the unnecessary detailing that’s often seen on Chinese bikes. The upside-down forks are new, too, as are the dual petal-style brake discs, gripped by radial calipers with ABS, while the mirrors – now mounted on the fairing rather than the bars – have indicators integrated into their cases.

The engine and transmission are also revised. Where the current model uses the firm’s 276cc, single-cylinder ‘1P73MN’ motor, the new machine has a 278cc single, dubbed ‘1P75MN-A’.  In Chinese engine designations, the number usually refers to the bore, suggesting that the current model has a 73mm bore and 66mm stroke (for 276cc) and the new model has a bigger 75mm bore and shorter 63mm stroke (making 278cc). Power is unchanged at 19.5kW (26.1hp), and the top speed is rated at 126km/h – 78mph – which is again on a par with the current model.

The bike is expected to be officially shown in China soon, but if it does get the Lexmoto treatment to be sold over here it’s likely to take a while so it may well be 2023 before we see it on these shores. Since the current TR300T/Lexmoto Pegasus 300 is already a Euro 5 compliant maxi-scooter, only launched in 2019 and something of a bargain at just £3399.99, there’s a good chance that the two bikes will coexist once the new model is launched. The new TR300T’s higher spec and sportier stance could make it a pricier addition to the range rather than a direct replacement.