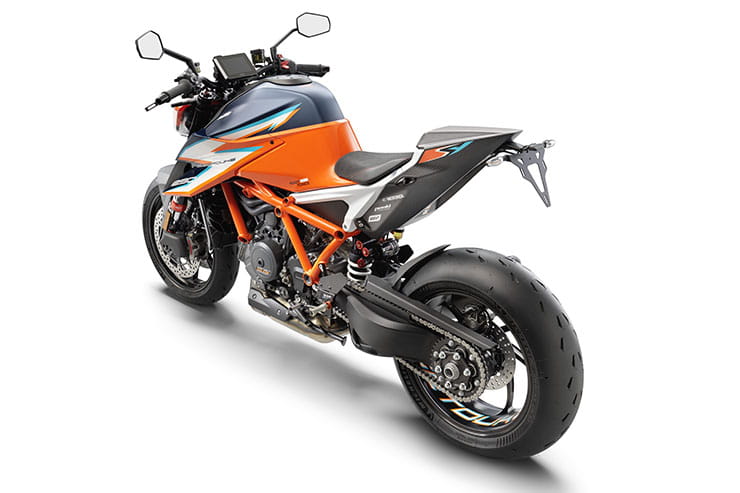 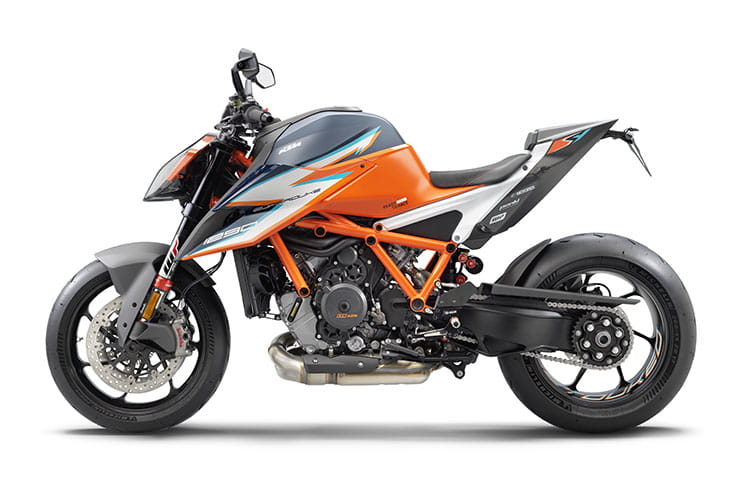 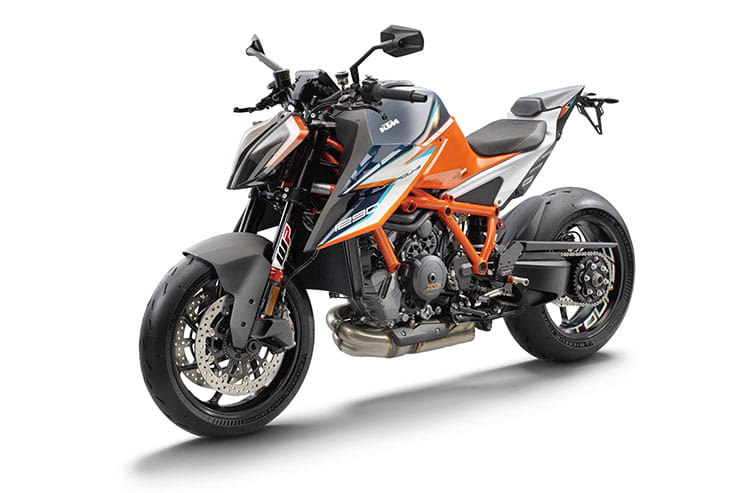 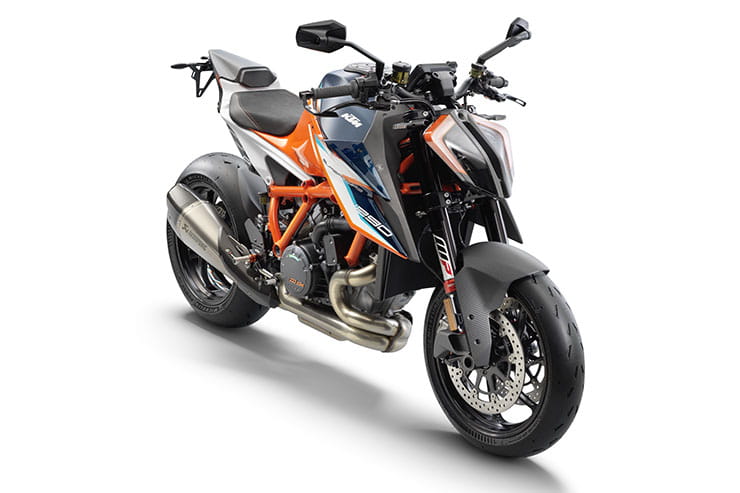 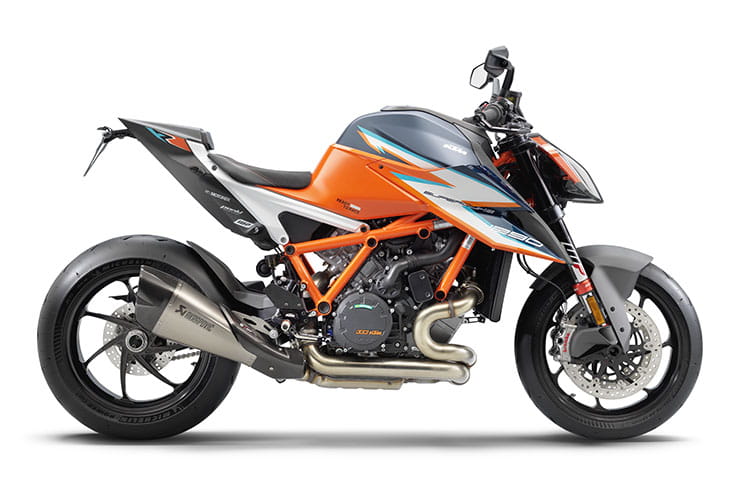 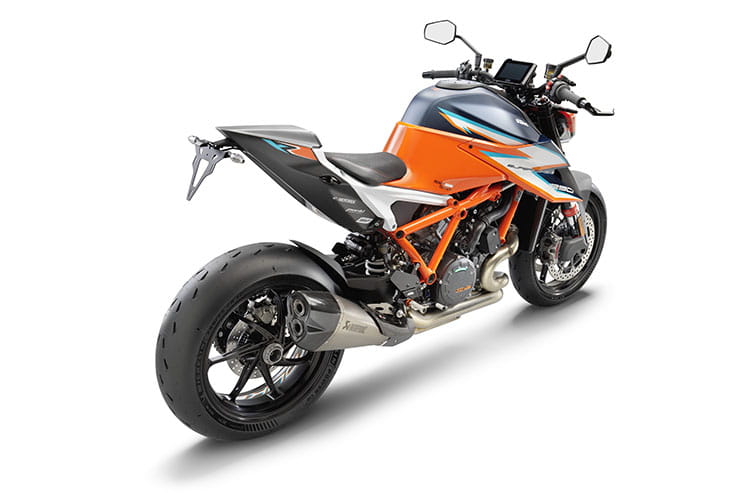 With a £21,499 price tag KTM’s new 1290 Super Duke RR carries a whopping £5750 price premium over the standard bike and yet it shares exactly the same 180hp V-twin engine. So what makes KTM’s new flagship worth the extra cash? 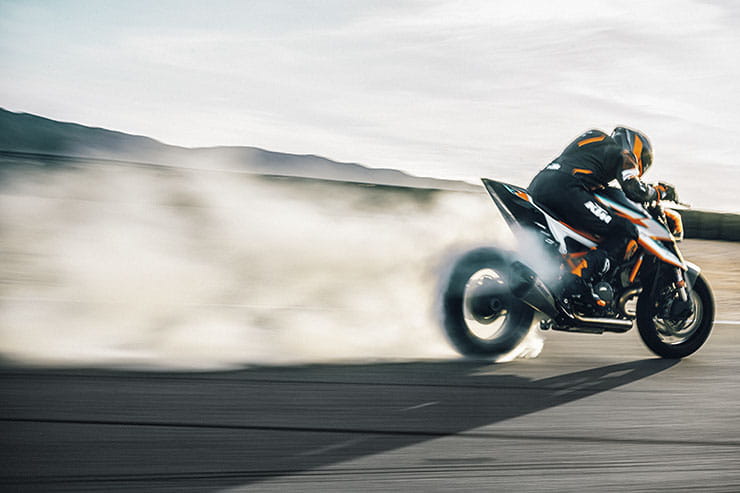 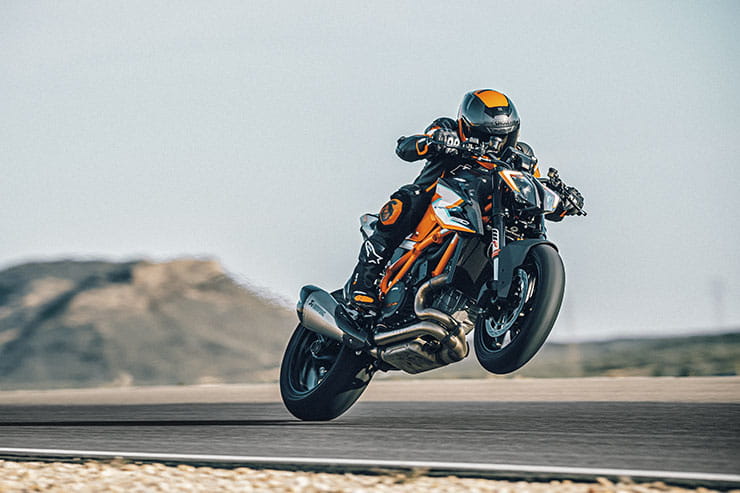 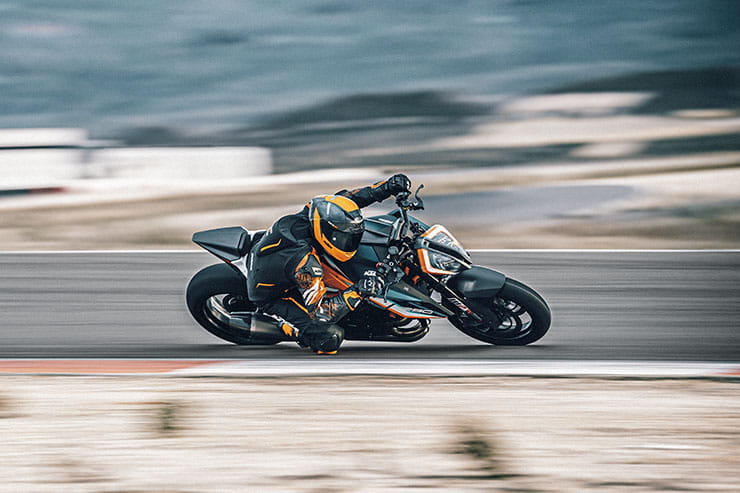 By surgically removing 9kg of flab, KTM has handily brought the Super Duke RR’s dry weight to 180km, neatly matching its claimed 180hp output for the magic 1:1 horsepower-per-kilo ratio. Of course, it’s not a real-world figure, as the numbers are being massaged a bit to fit that storyline. Rated at 132kW, the engine is actually 179.5PS, or 177bhp, rather than the notional 180, and the 180kg mass is a dry figure bereft of oil or fuel. In real-world, ready-to-ride form with a 90% full tank – as bikes are listed on type-approval documents, for instance – the Super Duke RR comes in at 200kg.

But even setting those details aside, there’s no doubt that the Super Duke RR will live up to the ‘Beast’ image that KTM has forged for it. 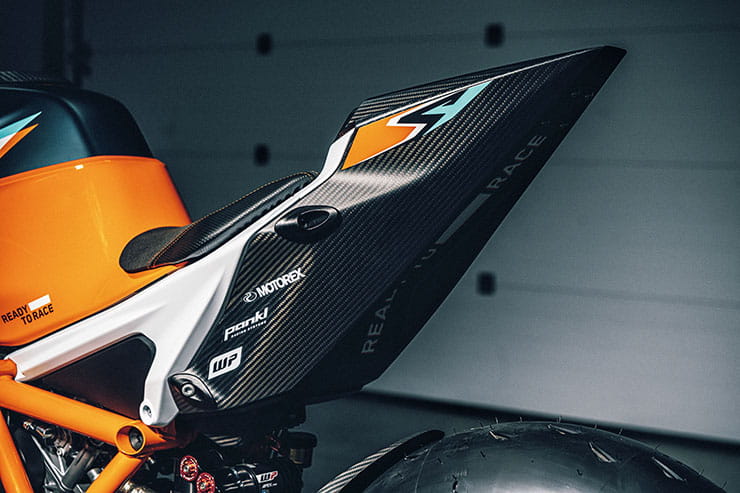 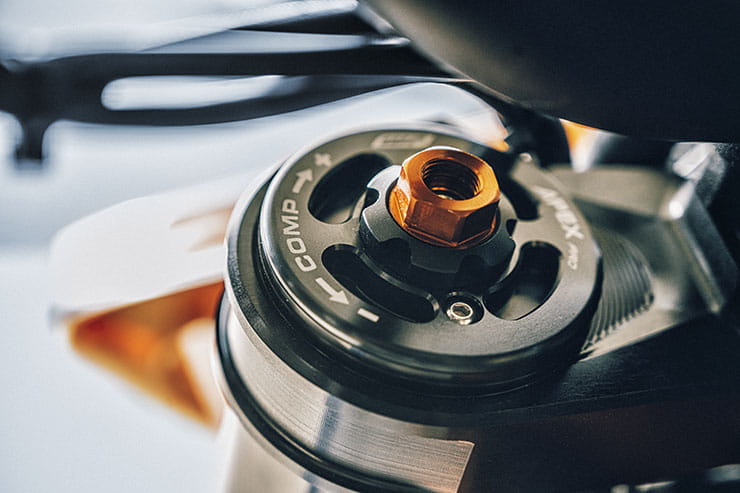 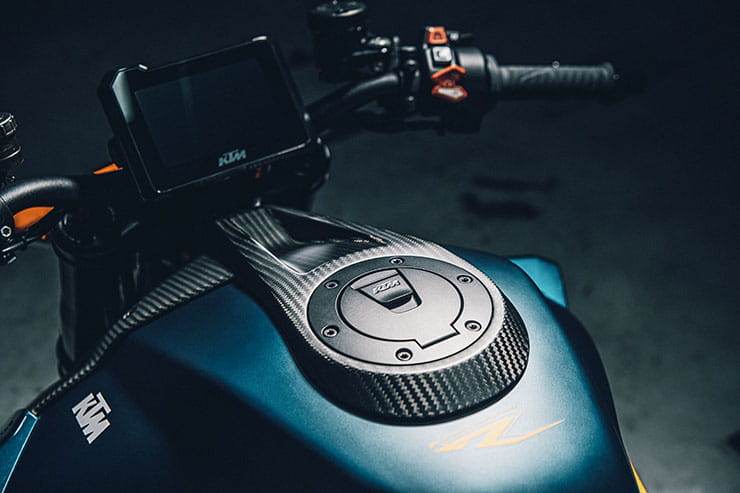 Changes start with the bodywork, which is largely carbon fibre including the tank panels and front mudguard. There are also extra carbon parts like the new cooling ducts for the front brake calipers, while rear seat subframe is all carbon, weighing just 800g and mounted on a cast aluminium support.

Those brakes are Brembo Stylema monoblocs mounted at the bottom of a pair of Apex Pro 7548 forks taken from the top of WP’s range. A matching Apex Pro 7746 rear shock is mounted at the back, offering a vast amount of adjustment including ride height to alter the bike’s geometry.

The forks are clasped in a CNC-machined top yoke that’s 320g lighter than the stock part, and the wheels are new 7-spoke forged alloys that cut another 1.5kg from the bike’s weight. KTM says that even lighter wheels were tried during testing, but the firm’s advisor – ex MotoGP rider Jeremy McWilliams – found they weren’t stiff enough to provide the right level of feedback. 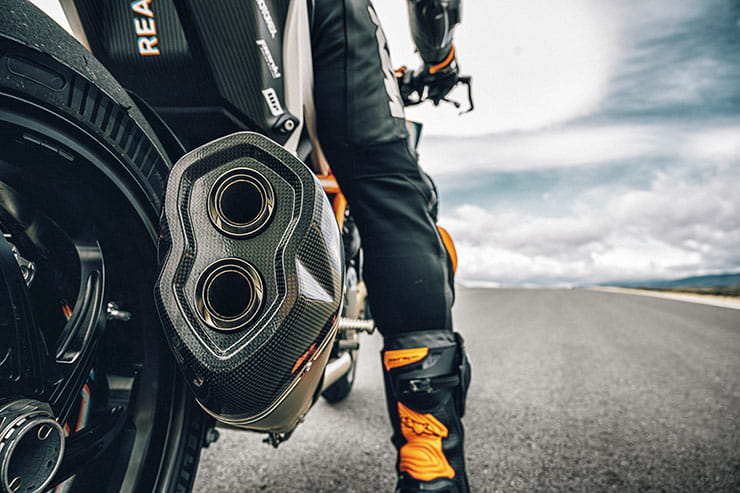 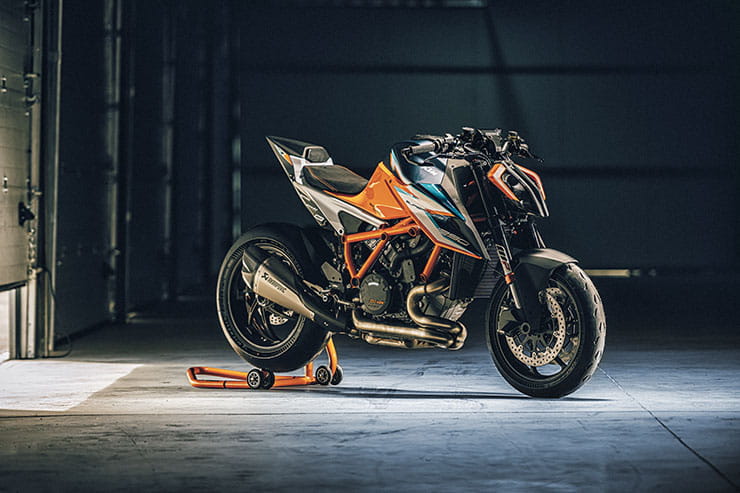 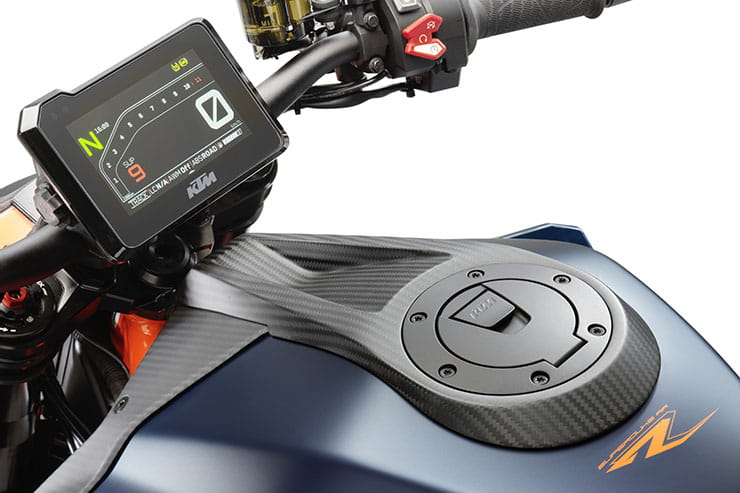 The RR’s styling is basically unchanged from the normal Super Duke R, but the carbon seat – which has no pillion provision and a much sharper rear end as a result – incorporates new LED tail lights. The seat is also 12mm higher than the normal bike at 847mm at its normal ride height, although it can be dropped to 837mm by adjusting the shock. The fuel tank shape, while looking the same as the normal bike, is also slightly altered to provide more support for the rider under hard braking. Adjustable CNC-machined Gilles foot pegs offer 12 positions to tailor the riding posture, allied to bars that can be adjusted to four places with 22mm of front-rear movement. All the levers, both hand and foot, are also adjustable, and there’s the option of a reversed shift pattern for the gears.

The Akrapovič exhaust silencer, made of titanium with a carbon end cap, is straight from the KTM Power Parts catalogue. There’s also the option of full titanium exhaust system to save even more weight. However, one of the biggest single weight savings comes from the humble battery, which is switched for a lithium-ion pack that’s a full 2.5kg lighter than the normal lead-acid unit.

In terms of tech, the Super Duke R isn’t lacking much, but the RR adds extra ‘Performance Mode’ and ‘Track Mode’ riding settings. Performance Mode is positioned above the normal ‘Sport’ setting, allowing customization of the traction control settings and the option to switch off the anti-wheelie. Track mode offers a similar level of adjustability but changes the TFT screen’s readout for a more circuit-oriented display.

It is enough to justify £21,499 of your hard-earned? If the answer’s yes, then you need to get onto KTM’s website here at 9am BST on 8 April to put your name down for one of the 500 bikes that will be made. 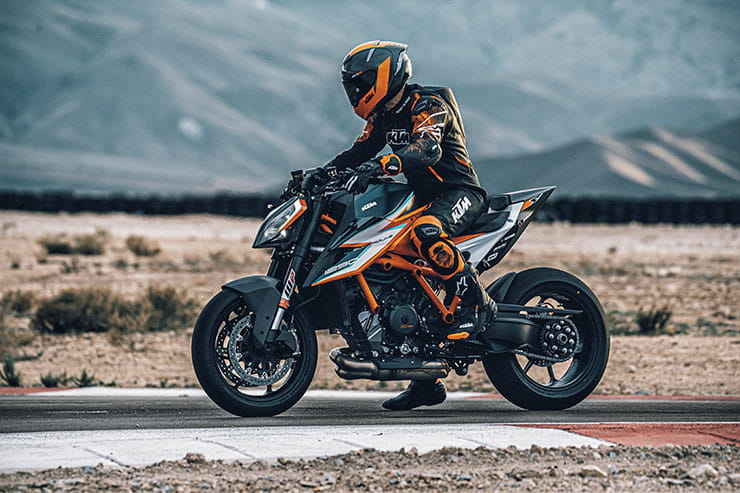 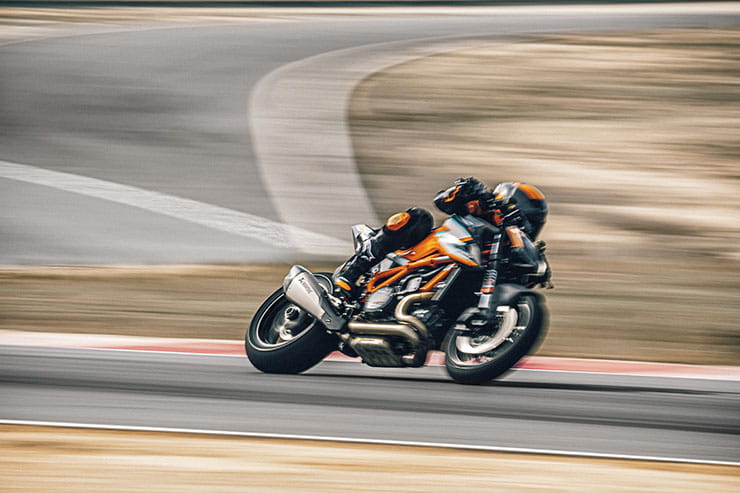 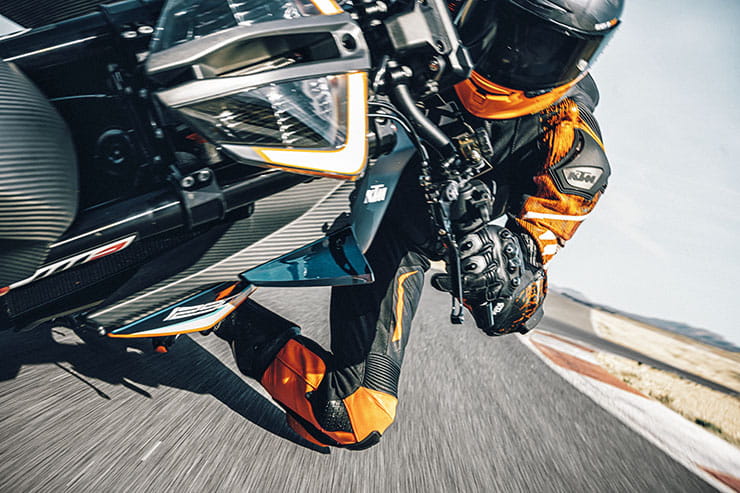