Triumph launches its 2020 Bonneville Build-Off today to give you the chance to vote on the best customised Bonnies built by the firm’s UK dealers.

Built using a combination of bespoke engineering and off-the-shelf aftermarket parts, the bikes are intended as inspiration for customers, suggesting how they might want to personalise their own machines. Anyone can vote for their favourites via a specially-made microsite between now and 14 October, with the most popular machine taking the overall prize. There will also be separately-judged sub-categories, with TV presenter George Clarke choosing the Design Award winner, Olympian and Scrambler owner Victoria Pendleton selecting the winner of the Inspiration Award, custom bike builder Jody Millhouse picking the Paint and Custom Award victor and Triumph UK general manager Devron Boulton deciding on the recipient of the Retail Choice Award.

Boulton said: “Everyone on this judging panel brings their own unique expertise and we all share a love for the Bonneville range. The diversity and quality of the custom builds this year really showcases the boundless possibilities we have to personalise this classic bike, using our huge range of genuine Triumph accessories.”

The winners will be announced on 28 October, but here are the finalists to choose from. 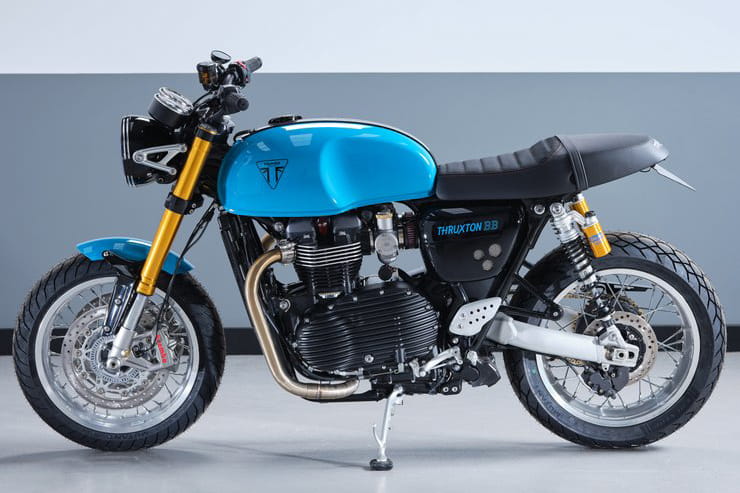 Based on the Thruxton R, Bevan Triumph’s Thruxton BB is tailored for comfort with wider, taller bars, while the visuals are transformed with Miami Blue paintwork and gloss black tank strap. Look closer and details include a CNC machined top yoke, a 2-1 exhaust, mini indicators, a shortened front mudguard and ribbed aluminium engine covers. 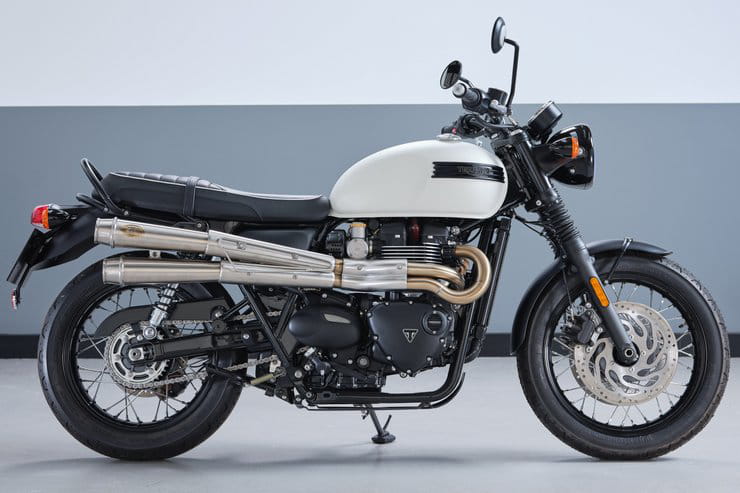 The team from Surrey created a scrambler-style machine with a Zard exhaust that stacks both pipes high on the right hand side. Apart from the matt white tank and matching piping on the seat, everything else on the bike – the wheels, engine, frame, fenders and even the badges – is matt black. 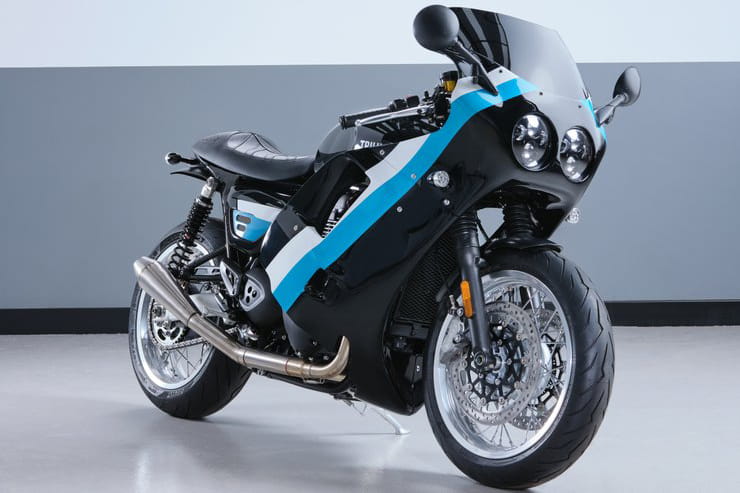 Triumph might not offer a big-capacity sports bike under the Daytona name anymore but Edinburgh Triumph has envisaged what a retro-inspired revival of the title could look like.

Based on a Speed Twin 1200, the machine adds an original Daytona fairing with black, white and blue paint that’s inspired by the 90s original. The seat is a custom one-off design, as are the clip-on bars. With the growing nostalgia for the 80s and 90s it’s easy to imagine a bike like this appealing to riders who missed out on the Daytona it’s based on. 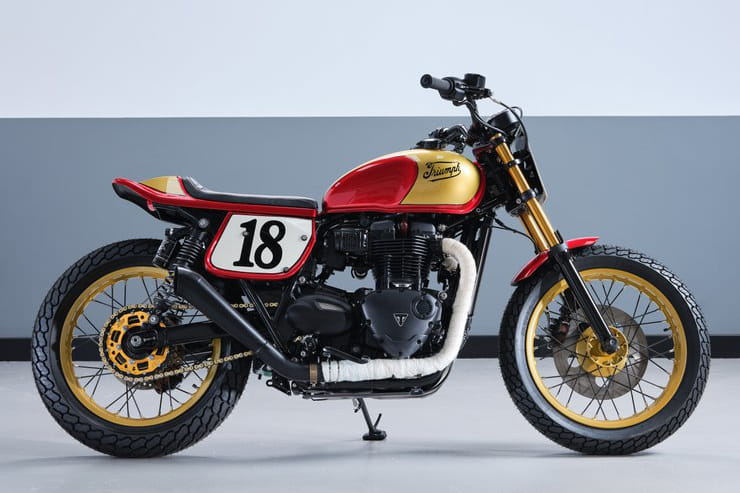 From a 90s throwback to a 70s one, Norfolk Triumph’s T100-based machine is candy-finished flat tracker that looks like the sort of thing Evel Knievel started his career on. Oversized, custom-made 19-in wheels change the bike’s proportions, making it look smaller, assisted by the skimpy single seat. The solid front brake takes the 1970s style through to the mechanical components, too, while gold-finished fork tubes match the highlights on the tank and the wheel rims. 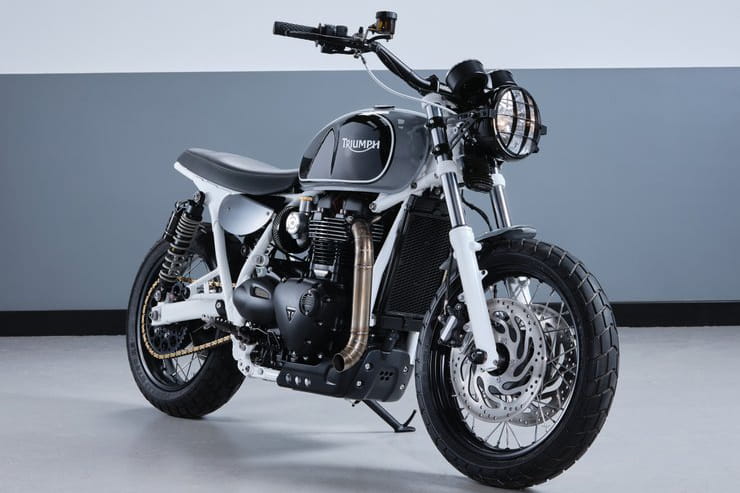 Triumph’s rivals at CCM might bridle a bit at the Spitfire name being used but A1 Moto’s bike is another flat-track inspired machine, albeit without the retro style of Triumph Norfolk’s Flat Bonnie. It’s a minimalist design with a seat like an ironing board and the smallest imaginable front mudguard, leaving the grey and black tank as the only real bodywork to speak of. The frame is powder coated white to contrast with the black wheels, while the Spitfire looks like it will live up to its namesake when it comes to volume, with each cylinder venting through its own stubby, unsilenced exhaust. 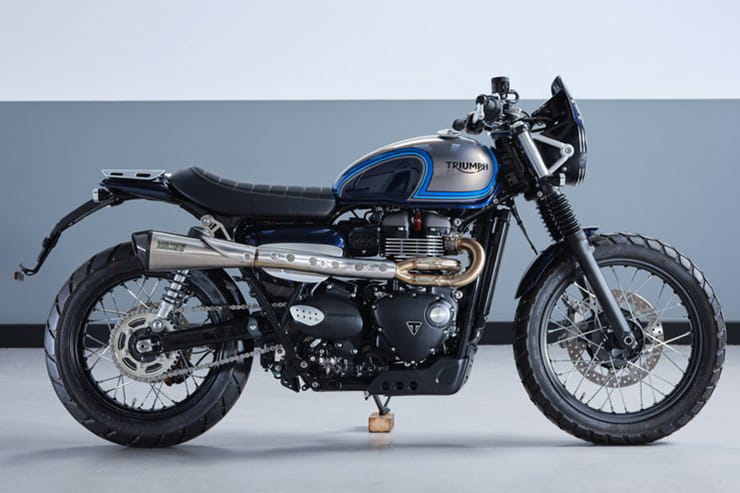 Triumph North London dug deep into the firm’s options catalogue to create the TNL Scrambler, based on the Scrambler 900. A short screen allied to new pegs a redesigned headlight bezel, black intake covers, Rizoma mirrors and matt black drag bars.  A high-level Vance and Hines exhaust completes the bolt-on transformation. However, it’s the custom paintwork that really makes the bike stand out with a subtle retro look that harks back to the scrambler heyday of the 1970s. 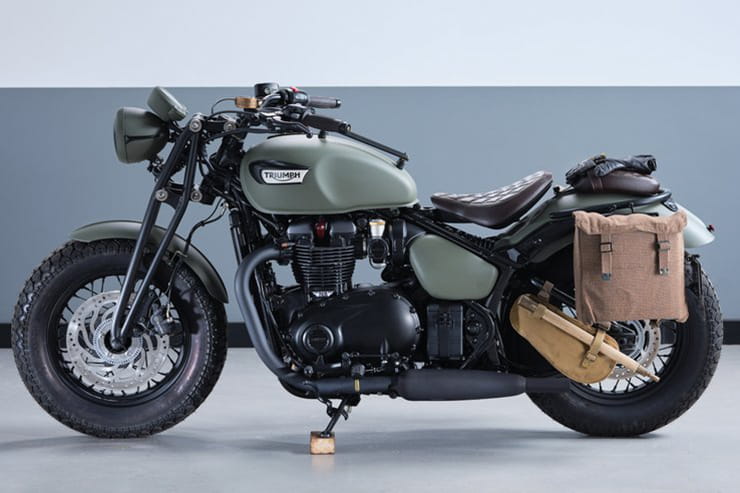 Built to mark the 75 anniversary of VE Day, the Fowlers machine takes a very different route – looking like it has ridden straight out of a war movie. Plenty of work has clearly gone into the bespoke chassis transformation that adds girder-style forks for an authentic WW2 look, while the army green paint and canvas luggage combine with the brown seats and short, matt black exhausts to complete the illusion. 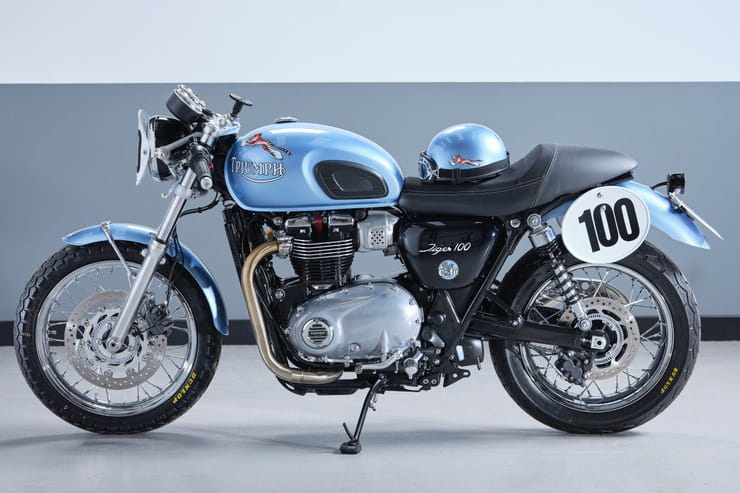 Inspired by the 1950s Triumph Tiger 100, Reggie’s Cafe Racer is named after the late father of Triumph Oxford dealer principal Andy Valentine. The traditional cafe racer look is complete with a humped seat, Tiger-painted tank (with a matching pudding-bowl helmet) and some of the lowest clip-on bars this side of a land-speed record bike. Dunlop TT 100 tyres give a convincing retro touch, and a closer look reveals plenty of parts from the Triumph options catalogue. 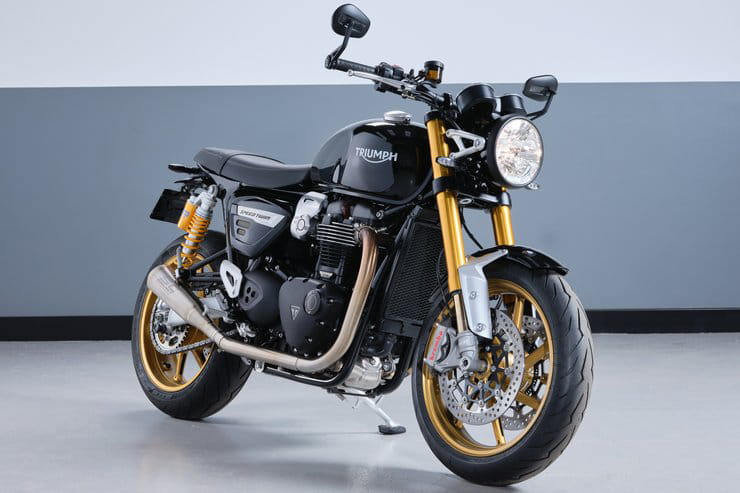 Offering bespoke builds under the guise of JL Customs, Triumph West London (Jack Lilley Ashford) have always been at the heart of the custom scene, and the Jack Pack Bonneville accessory kit has always been a firm customer favourite.

The Speed Twin JLC design is based on the Jack Pack, but takes the bespoke feel to the next level with suspension, headlight bracket and front fender from the Thruxton R, forks, Brembo brakes and bottom yoke from the Thruxton TFC, a bespoke LSL top yoke (allowing fitment of Speed Twin Fat bars), custom painted wheels, bottom yoke and fender from Surrey Customs, a custom FreeSpirits tail tidy, and an SC Projects exhaust.

As if building a custom bike wasn't challenging enough, designer Tom Daniels and builder Davide streamed the build live on Facebook and in front of an audience in the showroom.

Vote for your favourite here: www.triumphmotorcycles.co.uk/bonneville-build-off