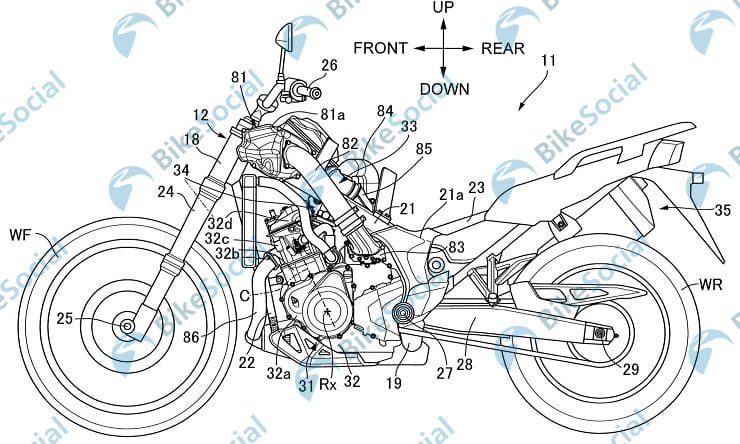 A supercharged version of Honda’s Africa Twin is being developed at the firm’s R&D facility in Japan – as revealed in new documents filed with the Japanese Patent Office.

Three detailed engineering patents, each around dozen pages long, go into detail of the bike’s innovations, which include an engine-driven supercharger and a dual injection system that uses both direct and indirect fuel injection to maximise performance and economy while reducing emissions. 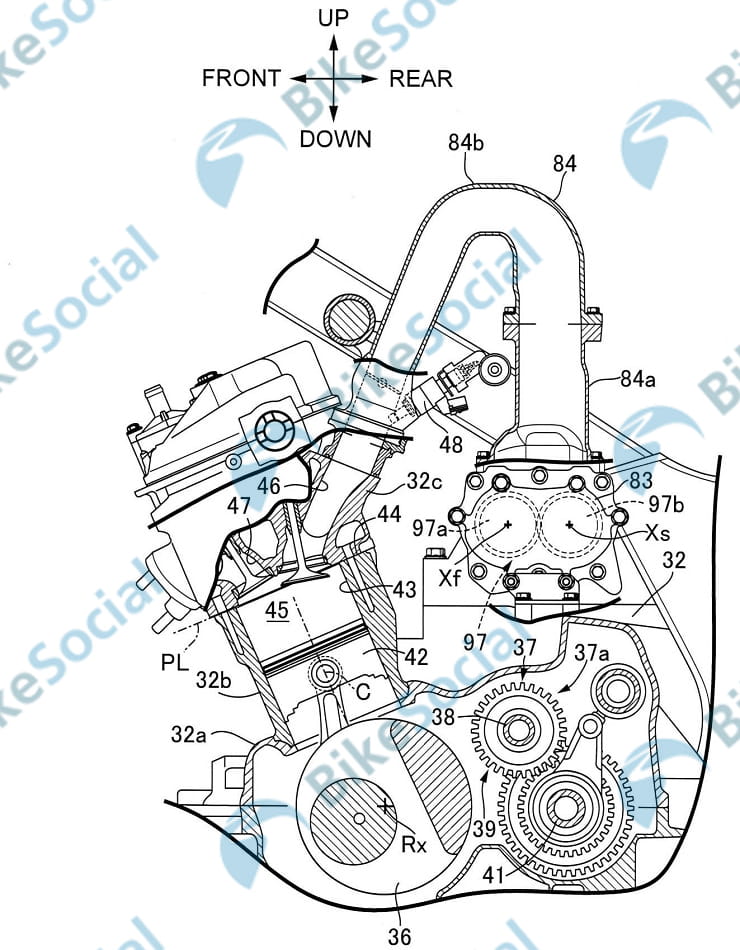 The focus is, of course, the supercharged engine. It’s based on the existing Africa Twin’s 1084cc, 101hp parallel twin, an engine that’s designed to be torquey, compact and lightweight rather than targeting out-and-out power. The Unicam design – with a single overhead camshaft operating four valves per cylinder – remains, but the addition of a supercharger and its related pipework make for a very different end result.

While Kawasaki’s H2 range has shown that superchargers and bikes are perfect bedfellows, and Honda’s design places its supercharger in a similar spot just above the transmission, Honda is taking a fundamentally different route with its choice of blower.

Kawasaki’s H2 uses a purpose-designed centrifugal supercharger, which is like the compressor half of a turbocharger, only engine-driven. The crankshaft is geared to drive an impellor that’s mounted inside a compressor housing to force the air into the engine. Centrifugal blowers don’t produce much boost until they’re running at high speed, so you need to rev the engine hard to get the best out of them.

Honda, however, is using a different type of supercharger entirely. It’s a twin-screw design, which is a type of positive-displacement supercharger. Unlike a centrifugal blower, a positive-displacement supercharger moves a fixed amount of air with each rotation, and since it’s geared from the crankshaft, that means you basically get the same amount of boost pressure delivered to the cylinders all the way from idle to the redline. 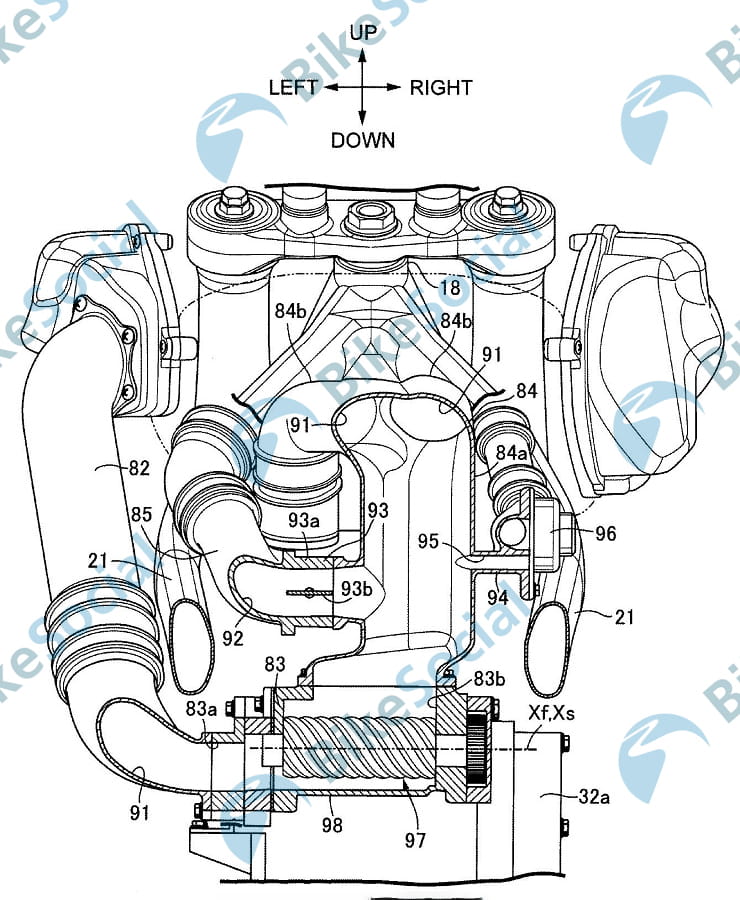 It’s the sort of supercharger that drag racers use, as it provides close to maximum boost all the way through the rev range. A centrifugal blower might make a bit more peak boost overall as you get near the rev limiter – hence Kawasaki’s choice when looking to make a supercharged superbike – but for an adventure bike like the Africa Twin, a flat, fat torque curve is what’s needed, making the twin-screw supercharger a better option.

Honda’s patents show that the blown Africa Twin still uses the same unusual airbox design as the normal version, with the airbox and air filters effectively split into two sections, sitting either side of the headstock. However, instead of feeding air straight to the throttle bodies from there, the supercharged version has a tube running from the left hand side of the airbox to the supercharger, which then compresses the air before feeding into intake ducts that run straight up before doubling over to take the air down into the throttle bodies and from there into the engine.

While there’s still one fuel injector for each cylinder mounted just under the throttle butterflies, Honda has also added a second that fires straight into the combustion chamber, using an extra fuel pump driven by the camshaft to provide a vast amount of fuel pressure to make the petrol atomise instantly as soon as it’s injected. The position of the direct injector also places its jet into the turbulent airflow from the intake valves into the combustion chamber, creating a ‘tumble’ effect that helps prevent fuel getting stuck to the cylinder walls.

By modulating which injectors are used, depending on revs, load and throttle opening, Honda should be able to significantly improve fuel consumption, performance and emissions. 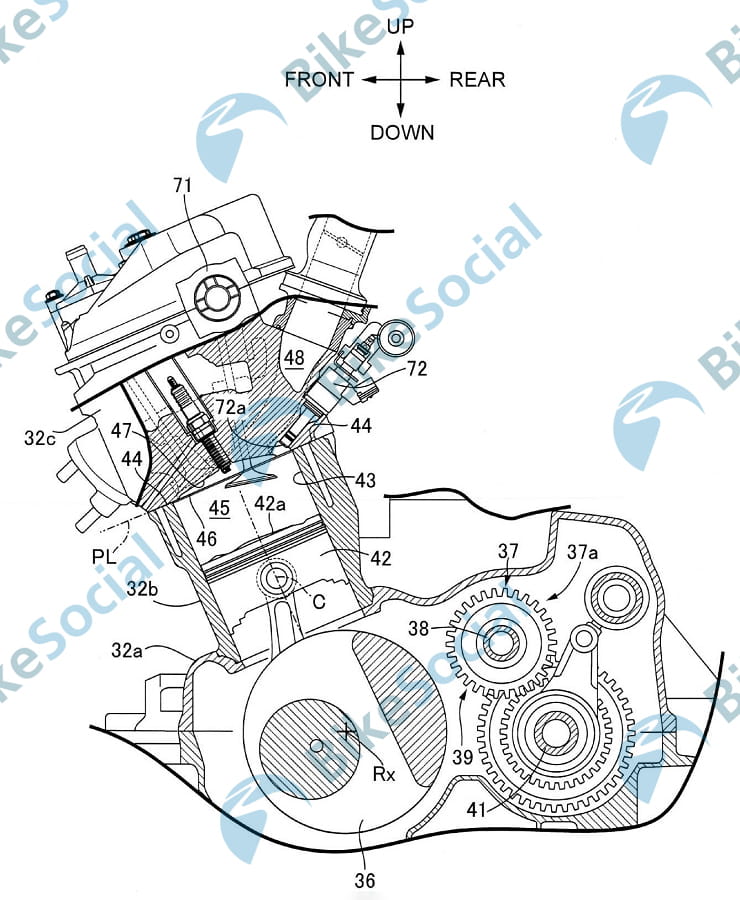 The supercharged bike’s intake system includes a pressure relief valve (marked 96 on the patent drawings) to release excess pressure from the intake duct. There’s also a bypass valve (marked 93b) and pipework to provide a link between the airbox and intake that skips the supercharger entirely.

The twin-screw supercharger itself works using two interlocking, spiral-shaped rotors – the ‘twin screws’ in the name. These mesh together but don’t actually touch each other, and are driven by gears at one end. Air comes into one side and the rotors – turning in opposite directions to each other – draw it along their length towards the output side of the supercharger. Along their length, the gap between the two screws gradually gets smaller, so the air is compressed as it makes its journey, and because the supercharger is geared to the crankshaft, changing speed as the revs go up and down, a consistent amount of air gets fed to the cylinders on each intake stroke.

It’s not the first time we’ve seen Honda experimenting with the technology. Back in 2017 the firm patented designs for a supercharged V-twin using a similar, positive-displacement blower mounted in a muscular-looking naked roadster. 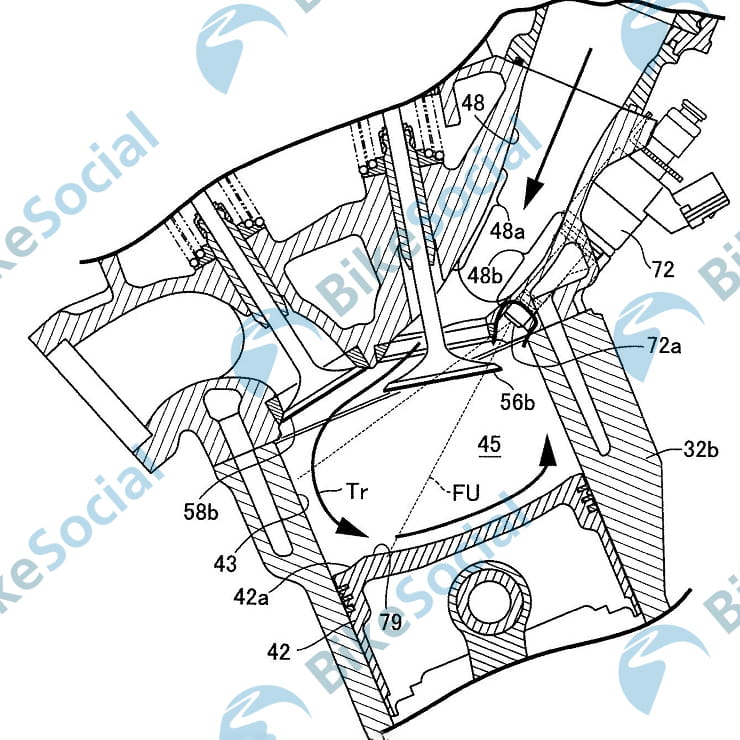 The patents’ detailed drawings, and the fact that Honda has already drawn up at least three separate patents relating to elements of the same design, suggest that this is a fairly serious project. Given Honda’s vast resources, it would be no surprise to discover that supercharged, direct-injected Africa Twins are already being tested at the company’s R&D department. Back in August last year the company was already working on a direct injection system for the Africa Twin, so the project appears to be a long-running one.

That’s not a guarantee that the idea will reach production, but the market for high-powered adventure bikes is showing no sign of waning – indeed, Ducati’s Multistrada V4 is likely to raise the performance stakes even higher in the near future. Honda’s Africa Twin, convincing though it is thanks to its lightweight design, already lacks peak horsepower compared to rivals like BMW’s R1250GS, and even lags behind the newly-launched, smaller-engined KTM 890 Adventure R, which claims 105hp from 889cc compared to the Africa Twin’s 101hp from 1084cc. A supercharger provides an easy and significant performance hike, adding globs of low-end torque as well as out-and-out power, so it’s easy to see how Honda’s engineers might be making a persuasive argument to incorporate the technology into future versions.