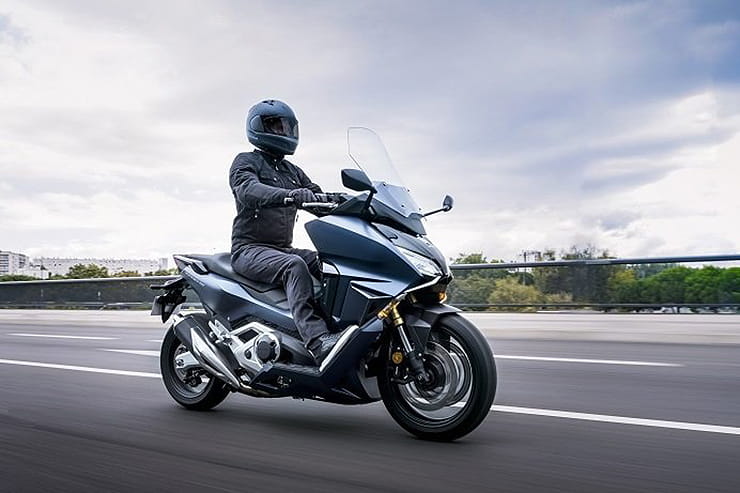 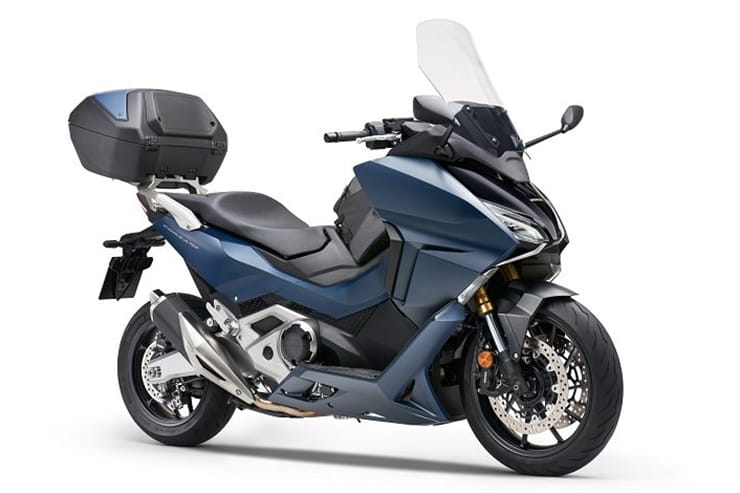 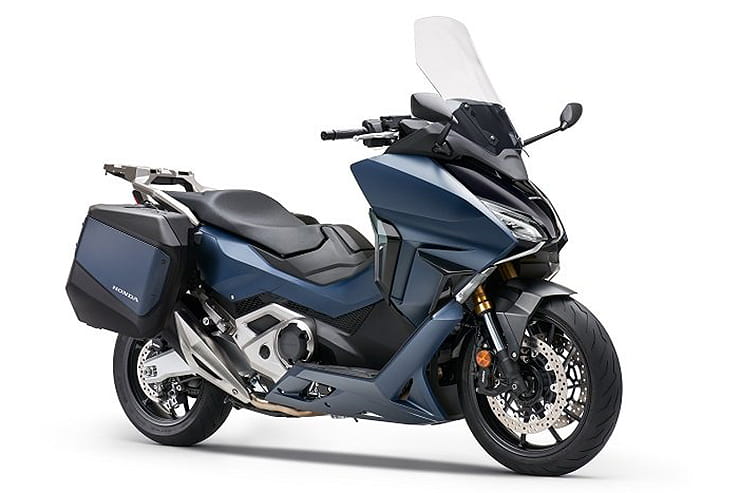 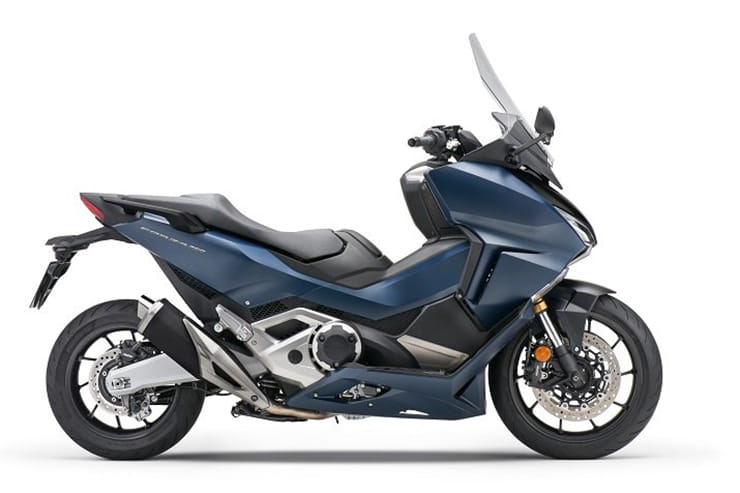 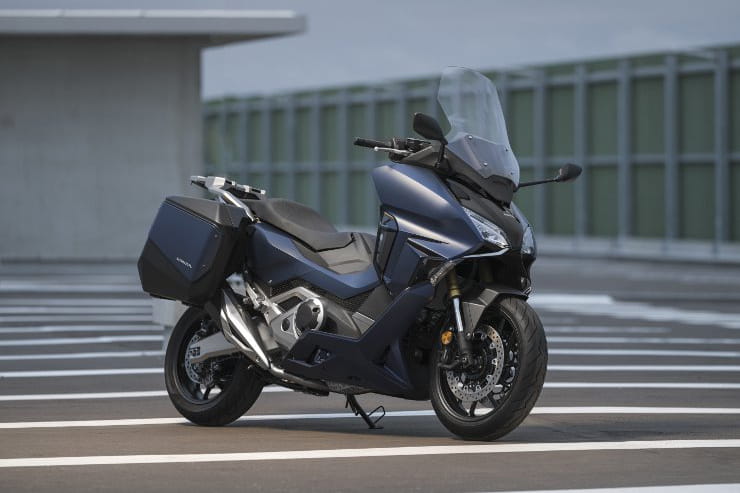 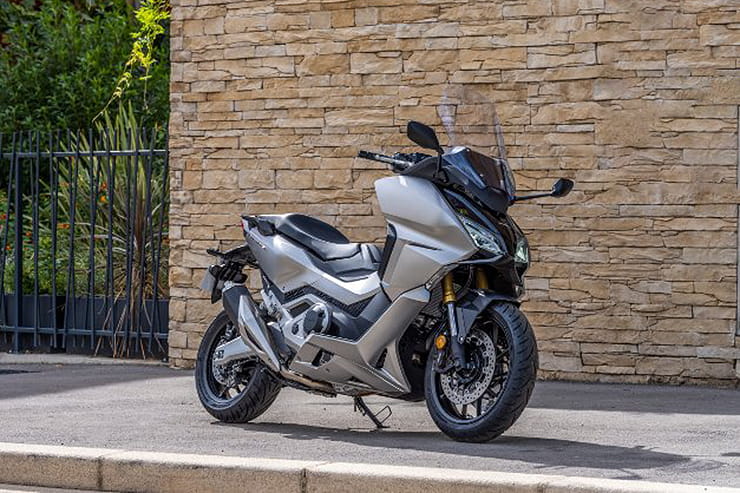 Honda’s Integra debuted back in 2012 as a spin-off of the ‘NC’ range of economy-focused twins. For 2020 it’s reborn as the Forza 750 with a higher-spec chassis, sharper styling and a more powerful engine.

Apart from an update in 2014 that saw the Integra gain an alloy swingarm and the same 745cc engine that the rest of the NC line gained that year, replacing the previous 670cc version, it’s been left unchanged since its debut, and its age has started to show. The 2021 transformation into the Forza 750 helps not only revive the bike with a technical overhaul but aligns it with the Forza model range, which now runs all the way from 125cc to 745cc to give a broader span of capacities than any other scooter line-up. 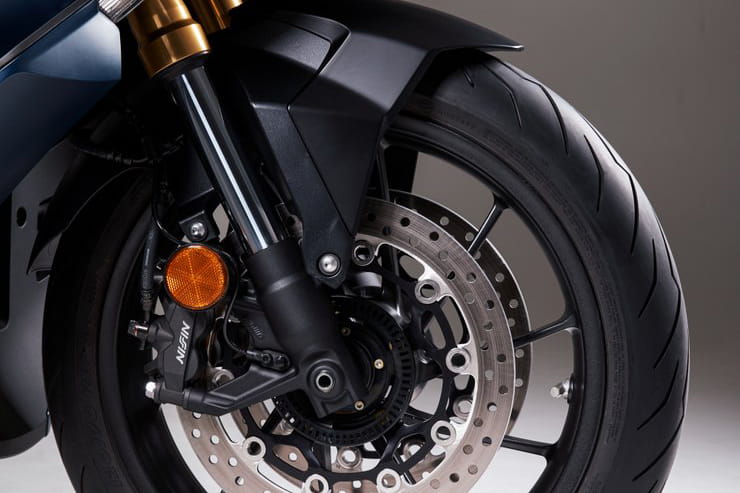 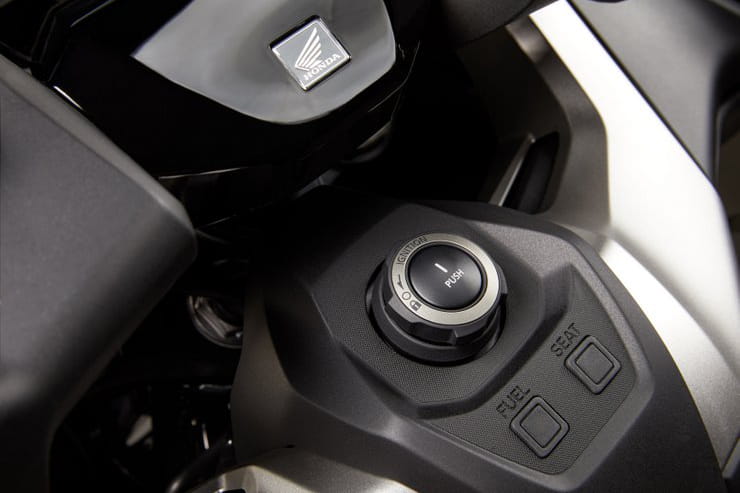 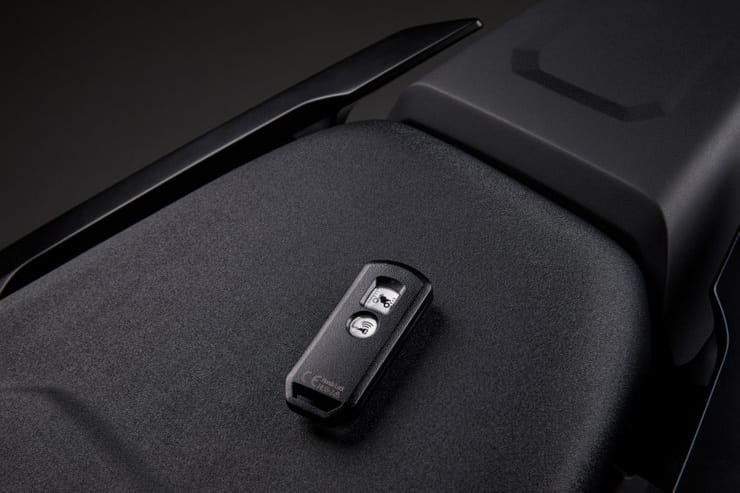 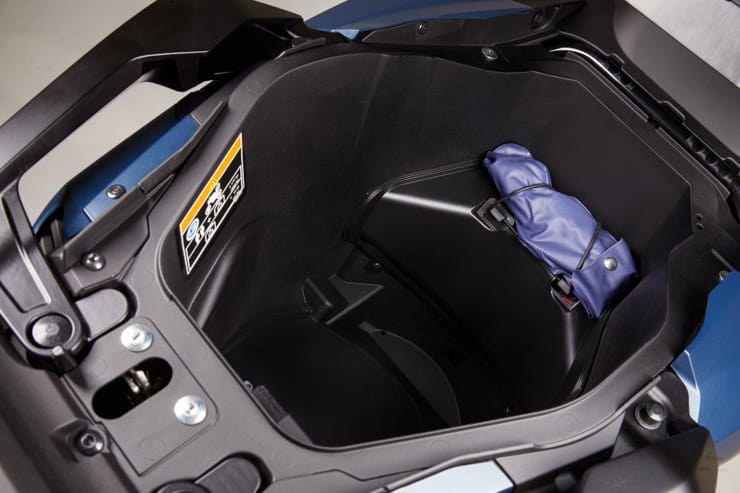 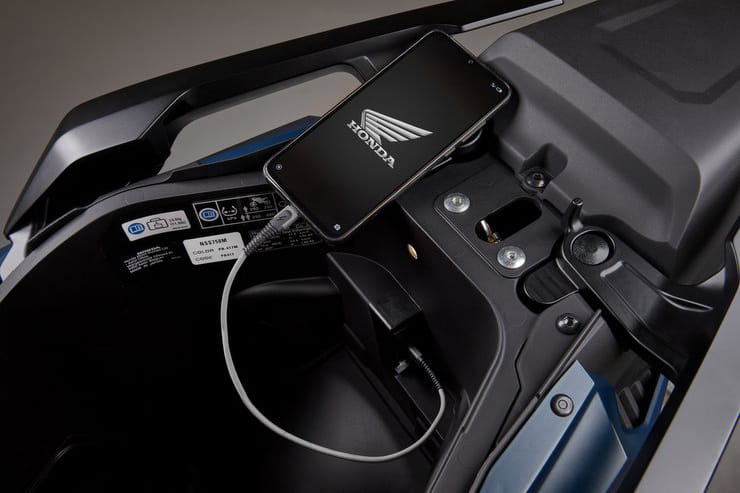 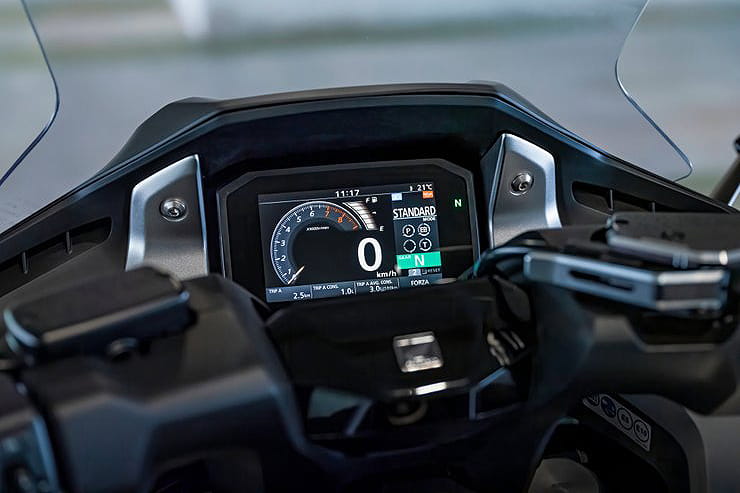 It’s fair to say that the Integra hasn’t been a huge sales success, at least in the UK. While its siblings – the NC750S, NC750X and X-ADV – have no problem finding customers, the Integra is the slowest seller of the range, despite arguably being the most practical. Despite their very different appearances and purposes, the NC750S,NC750X, X-ADV and Integra share the same basic engine and frame, with changes to the suspension and bodywork to differentiate them. The Forza follows the same formula, but borrows inspiration from the vastly stronger-selling X-ADV.

While the tubular steel frame is the same, the Forza 750 gains the X-ADV’s swingarm and a pair of 41mm upside-down forks instead of the dowdy-looking right-way up forks of the Integra. New wheels – 17in at the front and 15in rear – are added, along with twin radial-mount, four-pot Nissin front calipers on a pair of 310mm discs, where the Integra had a single 320mm disc and two-piston caliper. 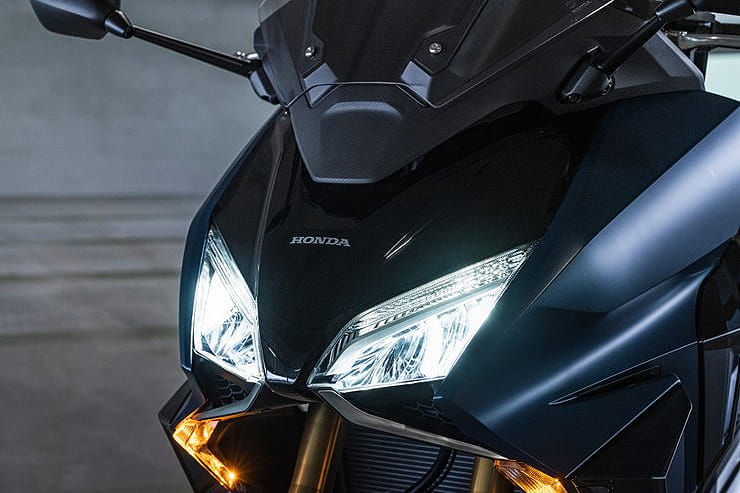 The engine is the same 745cc parallel twin – derived from the Honda Jazz car’s four-cylinder – as used in the NC range, the Integra and the X-ADV, but it’s been reworked to meet Euro 5 emissions limits, gaining a few more horses in the process.

Three riding modes – standard, sport and rain – are joined by a user-definable setting where you can select engine power, engine braking and traction control levels.

As before, the power unit’s party piece is Honda’s DCT twin-clutch transmission. Using two mainshafts – one for 1st, 3rd and 5th gear, the other for 2nd, 4th and 6th – each with its own clutch, the electronically-controlled transmission can have two gears engaged at the same time and switch between them seamlessly by disengaging one clutch and engaging the other. It can be used in fully-automatic mode, using a programmed shift pattern to change ratios depending on engine revs, throttle position, speed and gear, or in manual mode with triggers on the left bar to change up or down. As with the engine, there are three selectable riding modes for the transmission and a ‘user’ mode, allowing you to tailor how high the engine revs before upchanges in automatic mode. 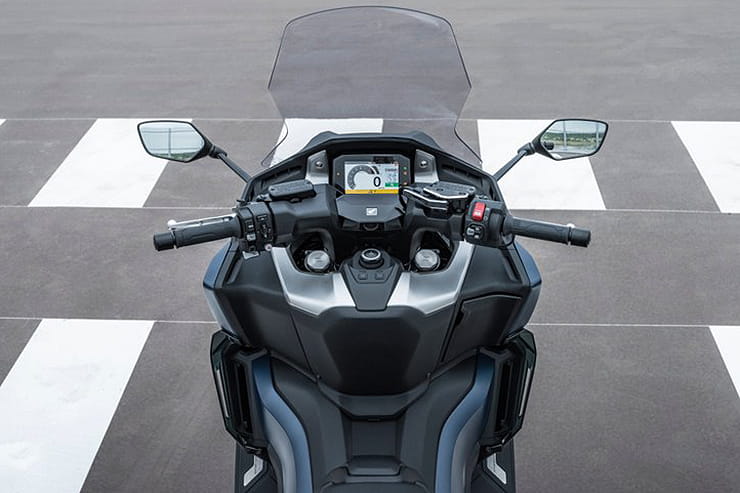 Practicality was always the Integra’s strong suit, offering bike-like performance, handling and range with scooter-style ease of use and storage space. The Forza 750 follows the same path with 22l of luggage room under the seat, plus niceties like a USB socket in the luggage compartment and a small glovebox in the right hand fairing panel.

A keyless system, with a fob that can stay in your pocket, controls the ignition, fuel cap, steering lock and seat lock. When fitted, it also controls the optional top box’s lock. Honda has also fitted a clutch mechanism to prevent the steering lock from being broken using brute force, a favourite method among bike thieves.

At 235kg wet the Forza is no featherweight, but it’s 3kg lighter than the X-ADV. However, the motorcycle-style NC750 is significantly lighter, at 217kg for the ‘S’ model and 220kg for the ‘X’ version. 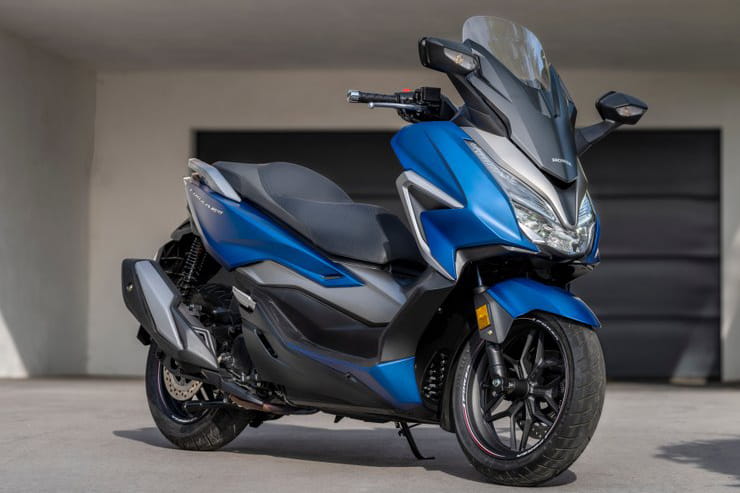 The Forza 750 might be the biggest thing for 2021 in Honda’s scooter range but it’s not the only update. There’s also a new Forza 350 to replace the old Forza 300 model.

With a true capacity of 330cc, the new model is a full 51cc bigger than the old 279cc model with a stretched bore and stroke helping to push power up from 24.8hp to 28.8hp. Although peak torque is unchanged at 27.2Nm, Honda says there’s considerably more power and torque all the way from 3500rpm than the old model, helping push top speed up by 5mph from 80mph to 85mph.

Of course, the engine changes are really a response to Euro 5 emissions rules, coming into force in 2021, and to meet them Honda has altered the valve timing and lift, added a lighter crankshaft and a revised air intake with larger throttle bodies and inlet valves. Of course, there’s a new exhaust as well, along with revised porting of the engine for better efficiency.

The bike’s styling is evolved rather than completely revamped, with a familiar look but new details including an electric screen that now has more travel, plastic grab handles rather than alloy, saving weight, and revised fairing side and nose panels.

Like the 750, the Forza 350 gets a keyless ignition with a fob that unlocks the steering, ignition, luggage space and – when fitted – the optional 45l top box. Honda’s smartphone voice control system, as used on the Forza 750, is an option on the 350. 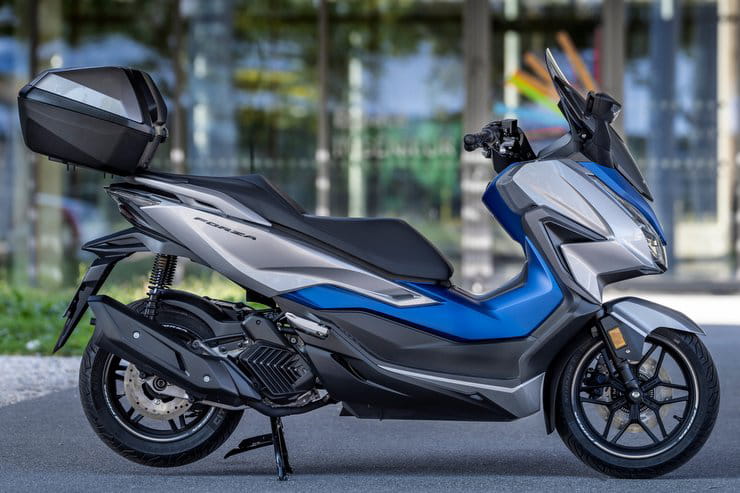 At the bottom of the Forza range, the Forza 125 is tweaked for 2021, with cosmetic updates to the front and side fairing, the rear side panels and the engine cover, and like the Forza 350 it gets a longer-travel electric screen that adjusts 40mm more than the old model.

The chassis is unchanged but the 15hp SOHC single gains switchable ‘HSTC’ traction control for 2021, as well as tweaks to meet Euro 5 emissions limits. As with the old version, there’s an idle-stop system to squeeze as much range as possible out of the 11.5l fuel tank; Honda reckons you could get as much as 300 miles between fill-ups thanks to economy of 120mpg.

The same ‘smart key’ keyless system that’s used on the 750 and 350 Forza models also appears on the 125, locking the ignition, seat compartment and the optional top box when it’s fitted.

Expected to reach dealers in January 2021, the Forza 125 price hasn’t been announced but isn’t likely to stray too far from the old model’s £4849.