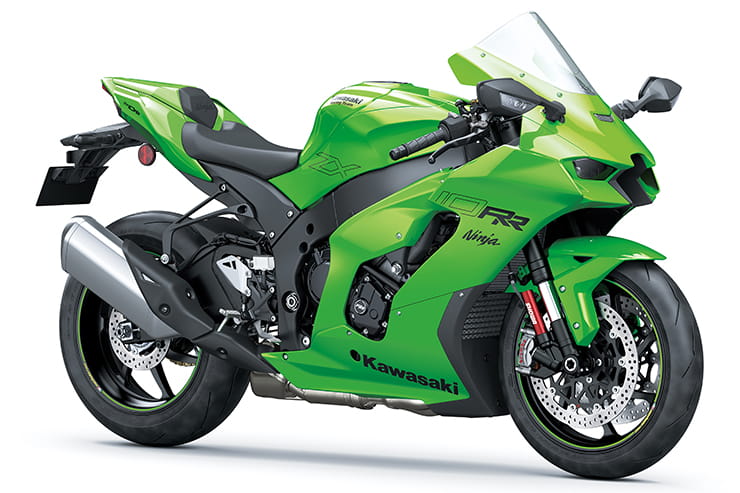 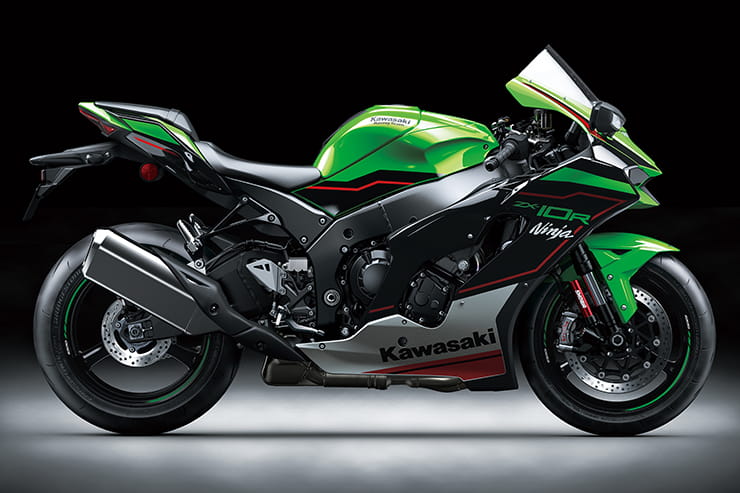 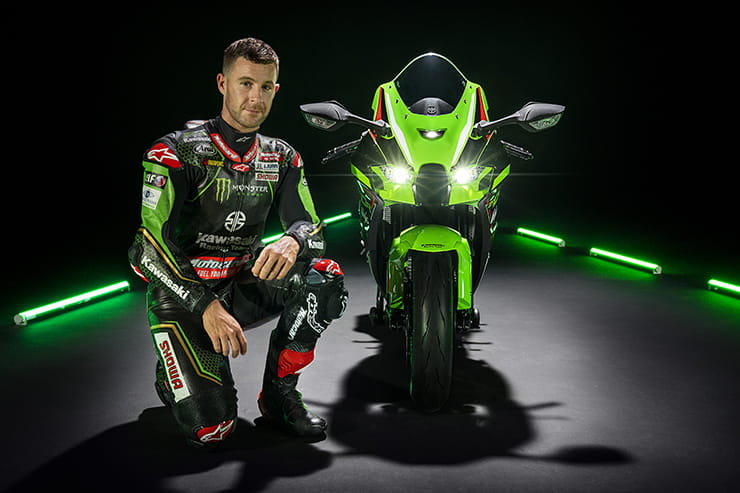 The insectoid new face of Kawasaki’s 2021 Ninja ZX-10R is sure to be a divisive talking point but there’s much more to next year’s update than a controversial restyle.

Before we delve into the more subtle updates, let’s address the ZX-10R’s front end. It’s been developed with improved on-track performance in mind, and that’s likely to strike fear into Kawasaki’s WSB rivals. After all, the ZX-10R has taken six consecutive titles in the class, and since the street version’s body shape defines the race bike’s aerodynamic performance, any improvement is likely to extend its advantage over the competition.

Love or loathe the 2021 bike’s face, Kawasaki’s numbers show that it’s a big improvement over the old design in terms of performance. Despite lacking the overt winglets that many of its rivals are sprouting, there are aerodynamic surfaces hidden behind the panels either side of the headlights, creating 17% more downforce than the previous design. What’s more, the nose is claimed to reduce overall drag despite being less pointy than its predecessor, with a taller screen to let riders tuck in better.

Even the back of the bike, which looks much the same as before, is actually new. There are slots in the sides of the tail to let air through, further reducing drag, while the side panel changes improve aero efficiency and help guide engine heat away from the rider.

Much smaller than before, the headlights are full-LED units that weigh 450g less than the old bike’s halogen lights. They flank a reshaped ram-air intake that’s actually smaller than before but just as effective as the old design in boosting the engine’s performance at speed. 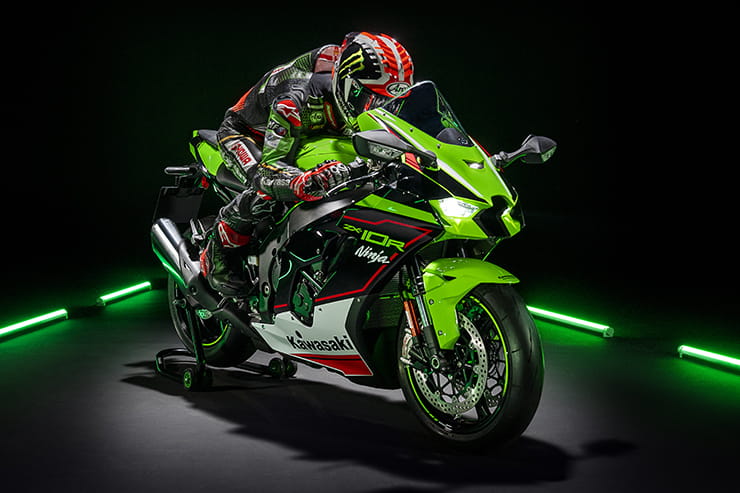 However, Kawasaki’s engineers haven’t just altered the ZX-10R’s styling – there are plenty of tweaks to the rest of the bike as well.

One area of focus has been the riding position, which is revised to improve both comfort and control. The taller screen gives better wind protection, while the bars are straighter and 10mm further forward than before to give more leverage. A steeper slant to the rider’s seat encourages a tucked-in riding position, as do 5mm higher footpegs.

While the engine is the same 998cc four as before, it gets a new oil cooler for 2021. Peak power and torque figures have yet to be officially announced, but leaked type-approval documents suggest that power is unchanged at 203PS (149.3kW) for the ZX-10R, achieved at a slightly lower 13,200rpm instead of the previous 13,500rpm. That may be due to the bike’s new exhaust, which includes revised header pipes, a repositioned catalytic converter, a smaller collector box and longer silencer. The pipe probably accounts for the fractional increase in the bike’s weight, up from 206kg to 207kg (wet) for both the R and RR.

The ZX-10R’s gearing is also modified, with a larger rear sprocket – 41t instead of 39t – and shorter ratios for 1st, 2nd and 3rd for improve acceleration.

The homologation-special ZX-10RR – a limited-production model with just 500 due to be made – gets more significant engine changes including a higher rev limit set at 14,700 instead of 14,200rpm. That’s notable as WSB’s mandatory rev limits are derived from the production bikes’ maximums. To achieve the higher-revving potential, the RR gets new camshafts, new valve springs, new Pankl pistons (each 20g lighter) with one fewer piston rings, shorter skirts to reduce friction and DLC-coated piston pins. The RR also swaps the old intake funnels – which were 10mm tall for the outer two cylinders and 30mm tall for the inner pair – for much shorter ones, all just 5mm tall, to move performance higher up the rev range. Again there’s no official word on power yet, but homologation documents suggest the RR maxes at 204PS (150kW), the same as the previous version, but now at 14,000rpm instead of 13,500rpm. 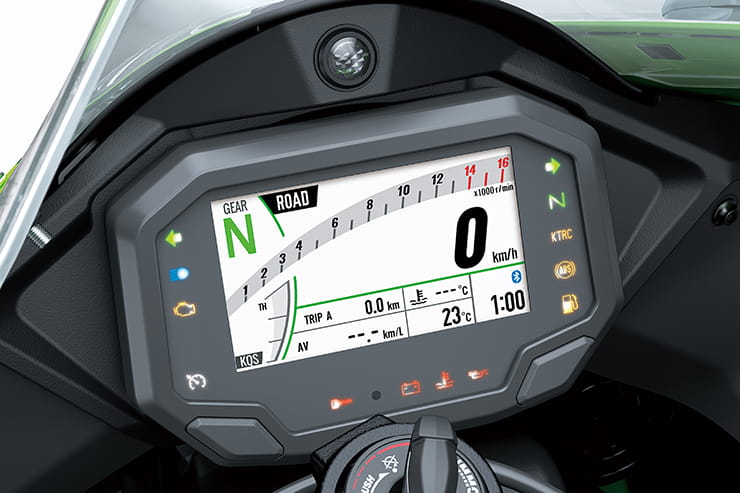 Changes to the chassis aren’t immediately obvious to the naked eye but Kawasaki has given the ZX-10R’s geometry a going-over for 2021.

The swingarm pivot of the base ZX-10R is moved down by a solitary millimetre compared to the 2020 model, in a change that’s claimed to improve corner exit performance. On the RR, the pivot is adjustable, as before. The swingarm is also revised to be 8mm longer than the old version, while the fork offset is increased by 2mm for an overall increase in wheelbase of 10mm – from 1440mm to 1450mm – to improve stability and move the bike’s weight distribution fractionally more over the front wheel.

The front suspension still uses Showa BFF forks, but the springs are fractionally softer and the fork rigidity is revised with wider lower triple clamps and revised outer fork tubes. It’s a similar story at the back, where the Showa BFRC shock is given a slightly stiffer spring and softer compression and rebound damping.

When it comes to electronics, the ZX-10R and RR have long been near the top of the tree, and the 2021 model carries over the same array of rider aids, all assisted by a six-axis inertial measurement unit, with small updates to the riding mode settings. New for 2021 is a standard cruise control system and a 4.3in TFT dash that allows two display modes and can tie to your smartphone via Bluetooth to transmit vehicle and riding log information to Kawasaki’s Rideology app, as well as displaying call and mail notifications on the dash. 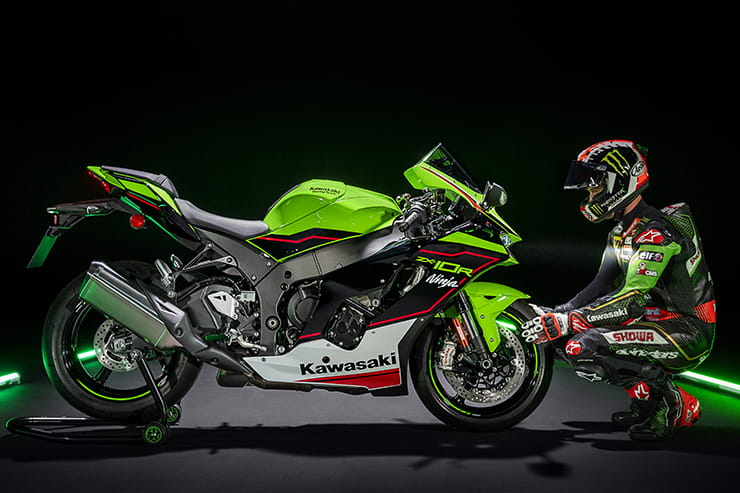 At the moment Kawasaki hasn’t revealed a replacement for the £19,149 ZX-10R SE, which uses Showa’s electronically-controlled suspension.

You’re facing a wait if you want a 2021 ZX-10R, though. The first of the base models are expected to reach showrooms in May or June 2021. While the ZX-10RR will start to reach customers much sooner, in December 2020, the initial batches of the bike have already been set aside for race teams so it’s unclear how many will be left for normal customers or when they will be delivered.

As well as its limited-production status and higher-spec engine, the extra money for the ZX-10RR goes toward Marchesini wheels, its more adjustable chassis and single-seat bodywork.

When it comes to colours, the base model is due to be offered in a choice of matt black or the green/black/white/red graphics seen here, while the ZX-10RR comes only in the much cleaner-looking Kawasaki green.