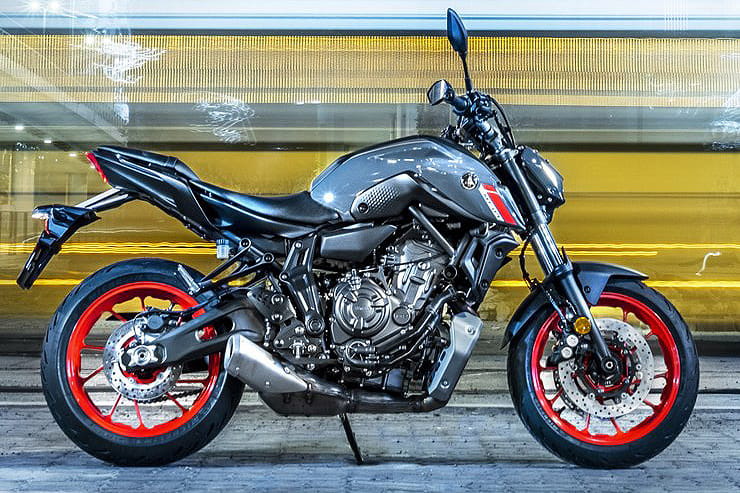 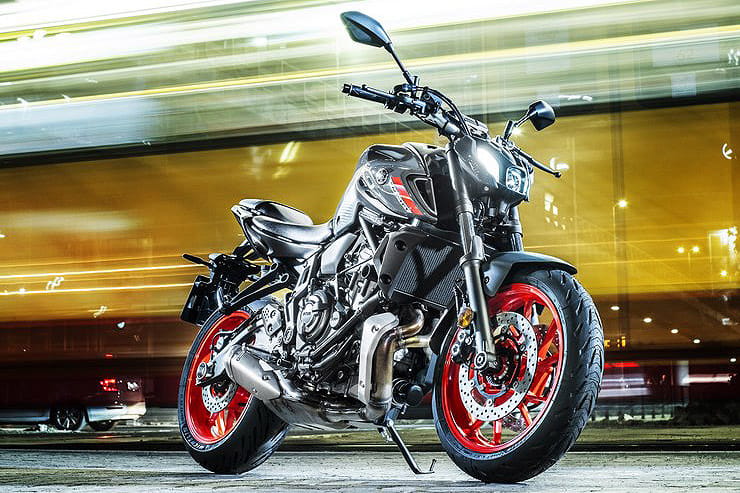 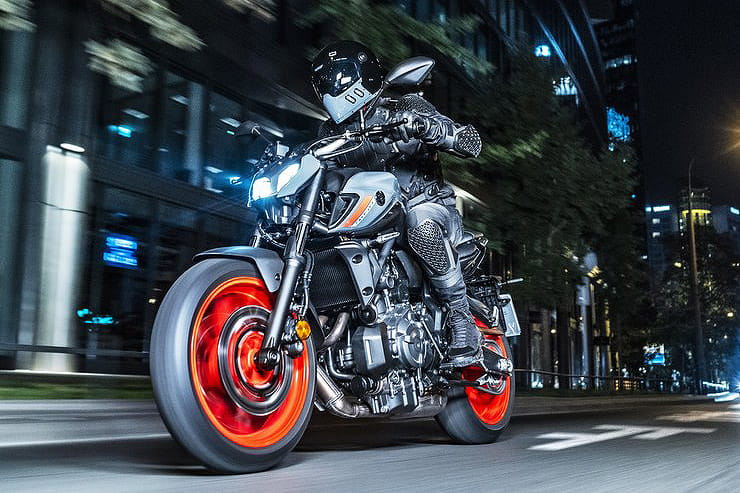 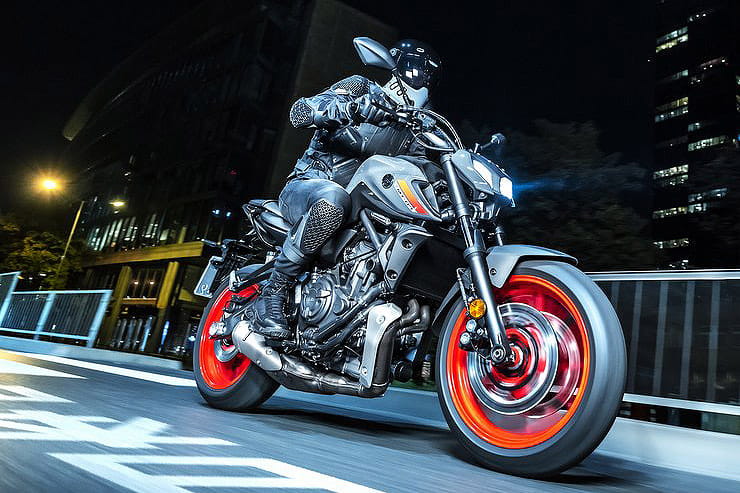 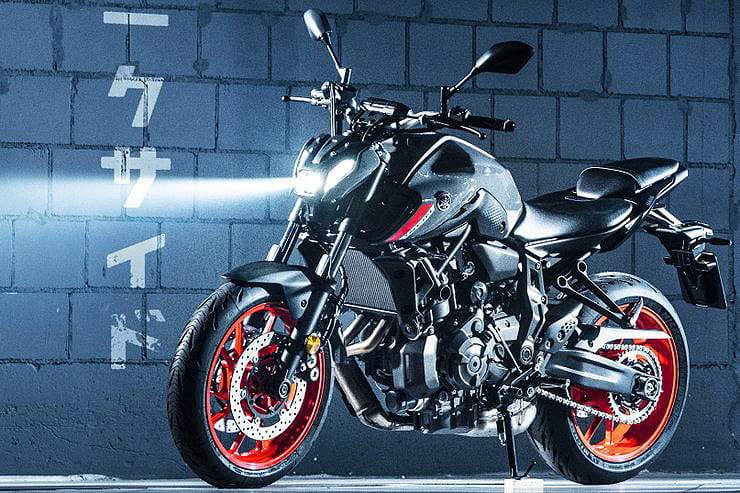 When it comes to value-for-money middleweights it’s hard to find a better option than Yamaha’s MT-07 and for 2021 the firm has unveiled a raft of revisions to make sure it keeps its edge over rival machines.

As with so many 2021 bikes, the change to Euro 5 emissions rules is one of the driving forces behind the updates, and while Yamaha went to extremes with next year’s MT-09 – giving it a bigger, more powerful engine – the tweaks to the MT-07 are more subtle.

The 680cc parallel twin gets a new exhaust system, taking its cue from the Tracer 700 by adding an extra catalytic converter in the downpipe section ahead of the engine. Less visible is a revised air intake duct design and improved fuel injection settings to meet the latest rules.

Yamaha says that the engine changes give a ‘more linear torque delivery’ but the bare numbers show that peak power and torque are actually fractionally down on the 2020 model. Where the current, Euro 4-spec machine makes 55kW (74.8PS, 73.8bhp), the 2021 machine achieves 1kW less (54kW, 73.4PS, 72.4bhp) at the same 9000rpm peak. It’s the same story with torque, which drops 1Nm from 68Nm (50.2lbft) to 67Nm (49.4lbft) at 6500rpm. Such small changes are probably too marginal to be noticeable, so hopefully Yamaha’s claim of better power delivery more than makes up for the drop. 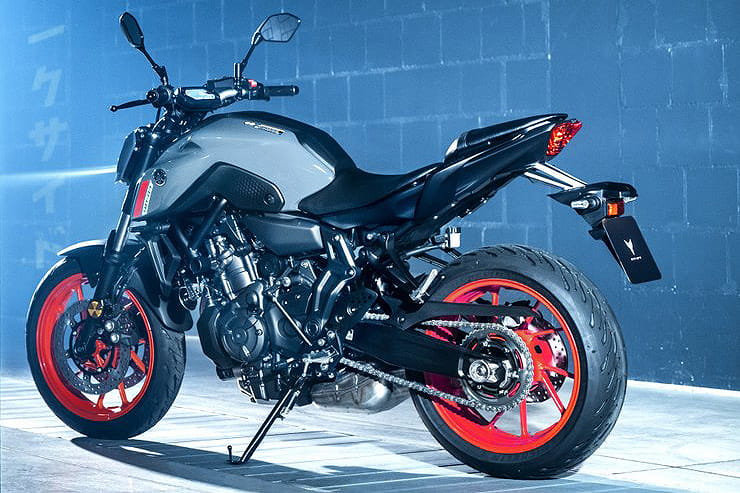 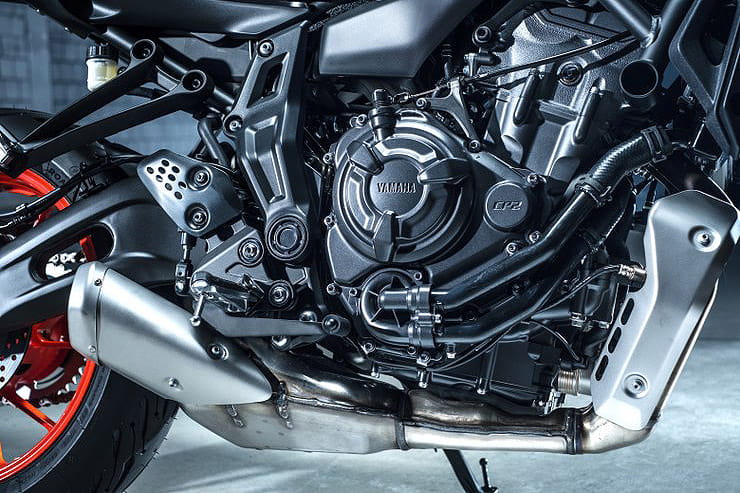 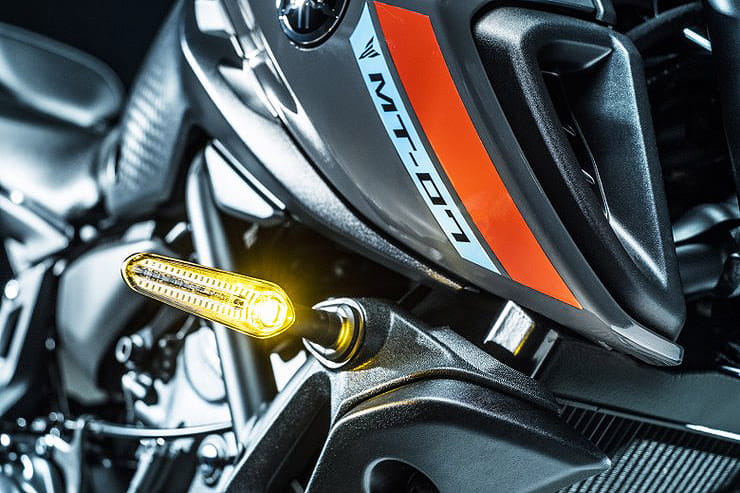 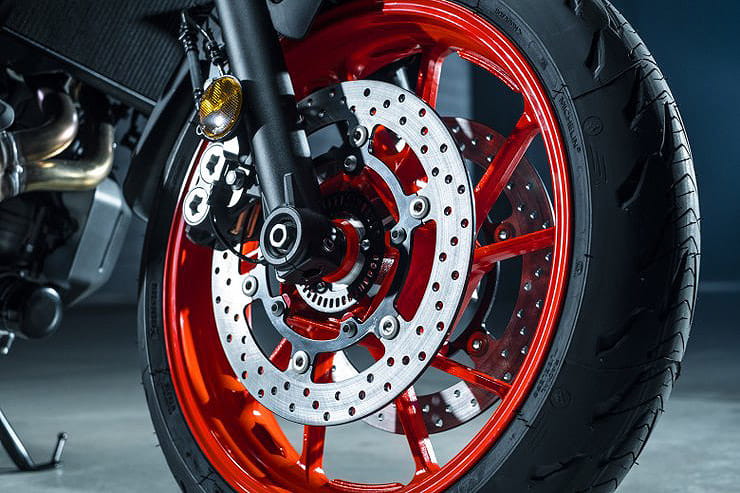 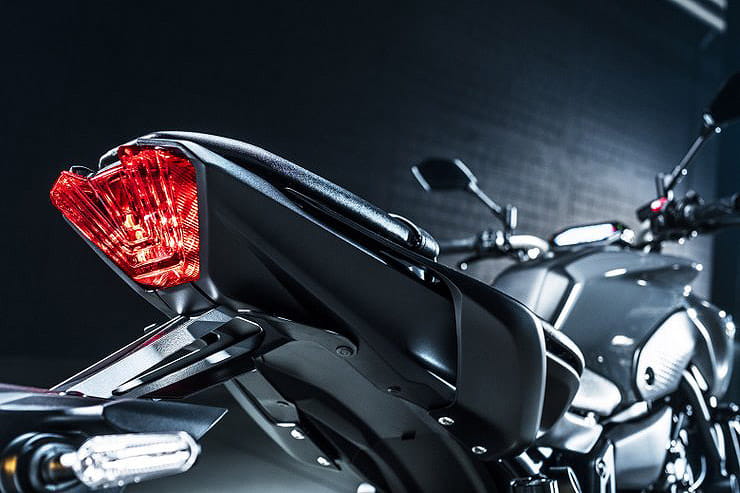 Yamaha hasn’t messed with the MT-07’s ‘diamond’ frame – unlike the 2021 MT-09, which switches to a sportier ‘Deltabox’ design – but there are still tweaks to improve the riding experience.

While we didn’t have many complaints about the old bike’s brake system, Yamaha has opted to give the 2021 machine larger 298mm discs instead of the old 282mm versions – a change which is claimed to improve stopping power with no increase in weight. The standard Michelin PR5 tyres are also new, as are 32mm wider aluminium bars which give more leverage than before.

From the rider’s perspective, other improvements include new side covers for the 14 litre fuel tank, not only giving the bike a new look for its air intakes but also adding textured knee-grip areas on the sides. The covers themselves are claimed to reduce weight, too, although Yamaha currently hasn’t revealed the bike’s claimed mass.

Riders will also get a different view thanks to new LCD instruments. While they’re not the sort of full-colour TFT kit that’s becoming increasingly common, Yamaha has added ‘spot colour’ sections to the display so the clocks are a bit more visually interesting than the old grey-on-grey design. 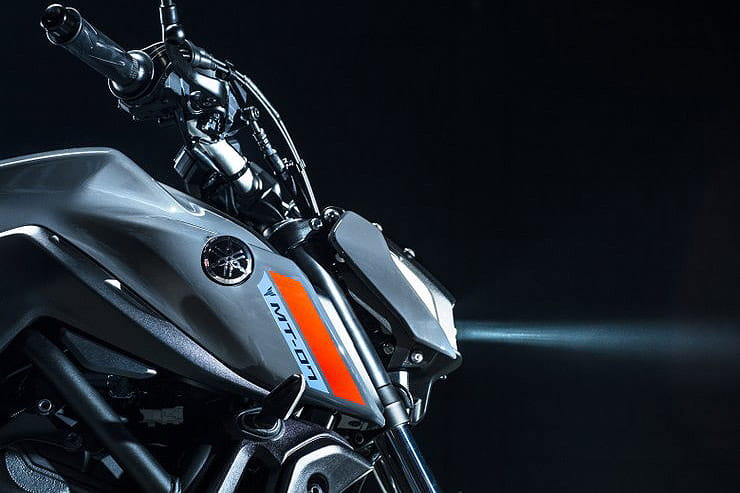 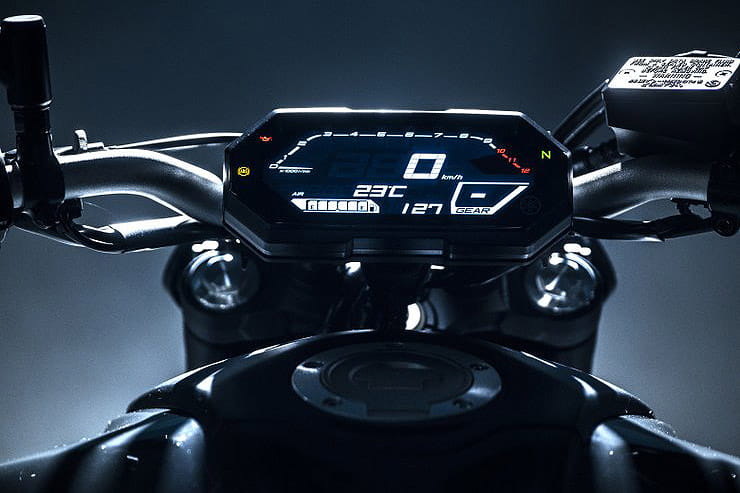 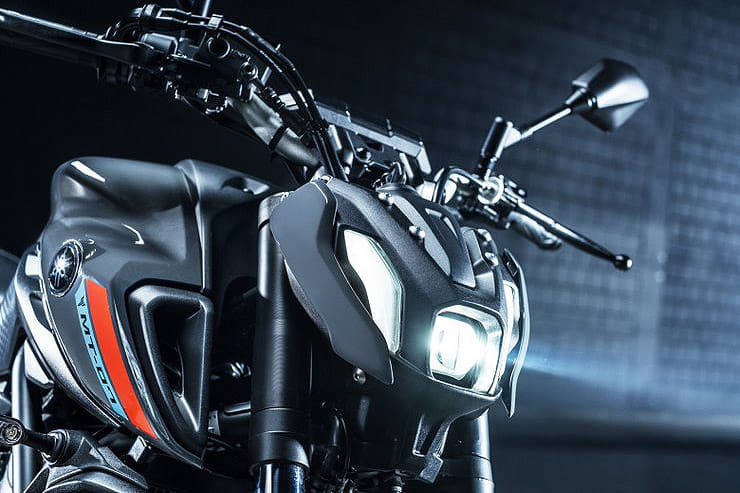 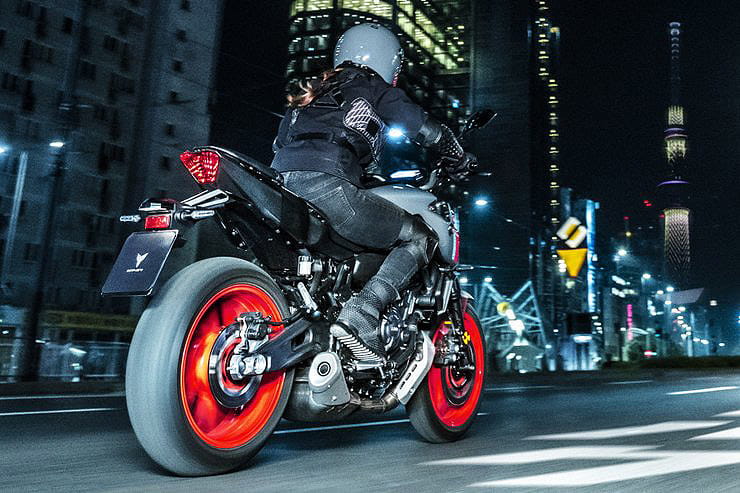 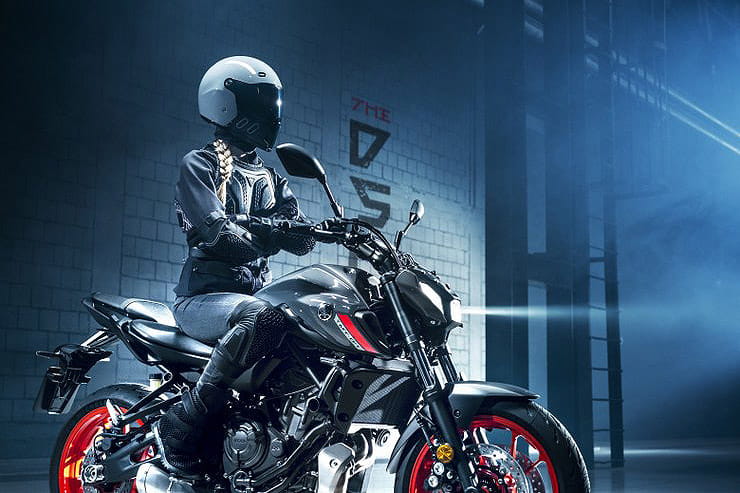 Finally, there’s the new look. Like the 2021 MT-09, the MT-07 gets Yamaha’s latest ‘MT’ family face, with a central LED projector lamp that deals with both high and low-beam, flanked by slanting LED position lights. Further back, those new intake ducts on the tank sides again match the MT-09’s, with a sportier look than the old versions, while the tail bodywork appears to be carried over unchanged.

In terms of colour, there will be three choices – ‘Storm Fluo’ as seen in these pictures, along with ‘Icon Blue’ or ‘Tech Black’

Yamaha is holding back with pricing announcements until nearer the bike’s March 2021 showroom debut, but depending on the impact of Brexit the next-gen MT-07 isn’t likely to be significantly pricier than the current £6697 machine.