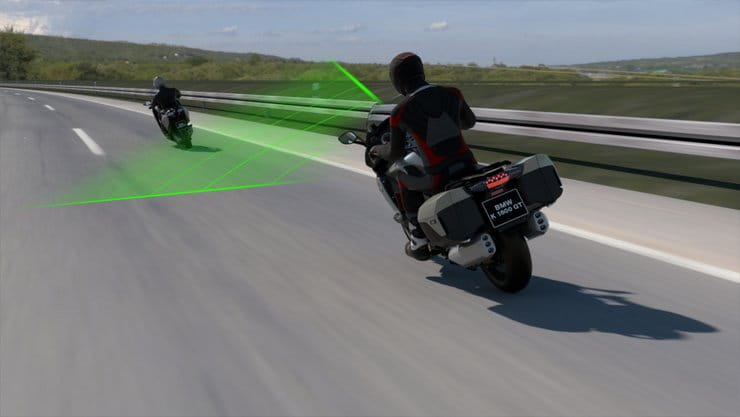 BMW has confirmed that it is joining the rush to radar-assisted adaptive cruise control systems by partnering with market leader Bosch to develop the technology.

The firm is the latest in a host of bike companies to announce the tech, but at the moment we’ve yet to see a single production model launched with radar cruise control. Ducati and KTM are both expected to reveal their first radar-assisted models later this year, with the upcoming Multistrada V4 and the completely redesigned 1290 Super Adventure both adopting the Bosch setup. Kawasaki has also announced a partnership with Bosch to use the system, and while BMW has only just made its decision public, the firm’s bikes have been seen testing with Bosch radars for several months, with the bagger version of the new R18 cruiser expected to be offered with the kit, along with the K1600GT. 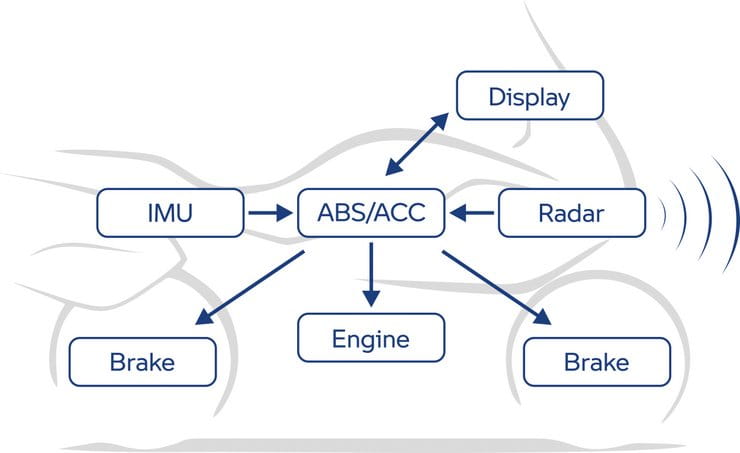 So, how does it work? Well, radar cruise control isn’t a totally new idea. Cars have been offered with it for at least a decade now, and the Bosch bike system uses the same front radar sensor that many car makers have already adopted.

The radar emits radio waves and ‘listens’ for them as they bounce back off objects in front. By measuring the time it takes for the waves to bounce back, and the direction they’re coming from, it can effectively ‘see’ if there’s something in the way and work out how far away it is and how quickly you’re approaching it.

BMW’s fitted with the system, which the firm is calling ‘Active Cruise Control’ or ‘ACC’, will also have the company’s normal, non-radar cruise control – which is confusingly titled ‘Dynamic Cruise Control’ (DCC). That means you can switch between the systems.

ACC is intended to be particularly useful in flowing traffic, for instance on a motorway or dual carriageway. It can ‘lock on’ to the vehicle in front and, by modulating your bike’s throttle and brakes, keep a constant distance. The system’s acceleration and braking is limited to make sure you’re not surprised by sudden reactions, and if it can’t brake hard enough under those limits to keep to the pre-determined safe distance, it will alert you to intervene via displays on the dash. You can also select the aggressiveness of the system’s acceleration and braking, choosing between ‘comfortable’ and ‘dynamic’ modes. 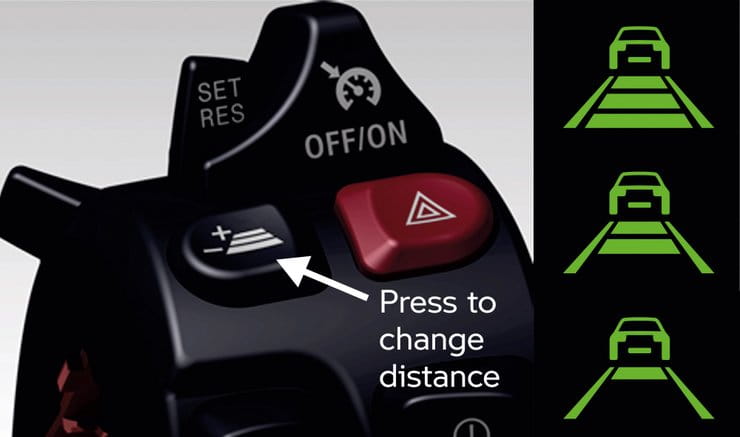 While car versions can sometimes be used to instigate emergency stops that would be potentially dangerous on two wheels, so the rider is expected to take over in an emergency. The radar is also programmed to ignore stationary objects, so it won’t accidentally lock onto something like a parked vehicle, but that means it also can’t react to stationary traffic ahead – so if there’s a traffic jam in front, you’ll need to disengage it and apply the brakes yourself.

As with normal cruise control, touching the brakes automatically disengages the system, as does winding the throttle forwards beyond the ‘zero’ position. Increasing the throttle overrides the pre-set acceleration level without disengaging the ACC if you need to get up to speed more quickly. Applying the clutch for more than 1.5 seconds also disengages the ACC, but short clutch movements don’t turn it off, so you can change gear to suit the speed as the adaptive cruise accelerates or slows down.

The distance from the vehicle ahead can be programmed, with three settings, and the ACC also automatically reduces speed if it senses you’re cornering, so the lean angle doesn’t need to go beyond a ‘comfortable’ level (suggested to be around 20 degrees). Braking and acceleration are also limited during cornering to make sure it doesn’t upset the bike’s dynamics. 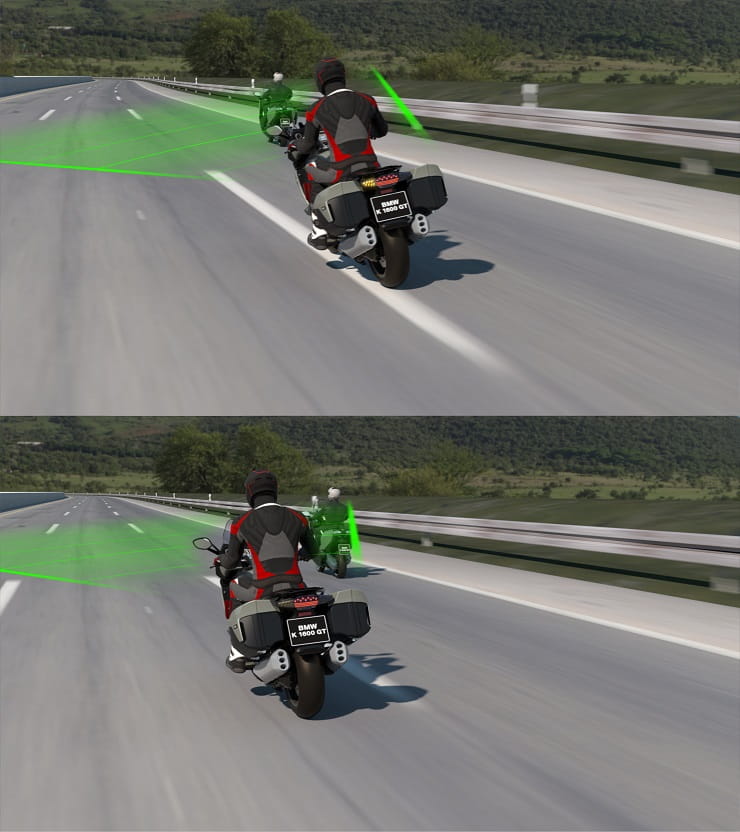 To use the ACC, you simply set it to a target speed, as you would with a normal cruise control. BMW’s active system works between 30km/h to 160km/h, while its passive DCC system – without radar assistance – works between 15km/h to 220km/h.

As with normal cruise control the target speed can be increased or decreased during use at the touch of a bar-mounted button.

If you’re using ACC and the vehicle in front slows too much (below 18km/h), the system automatically disengages and provides a warning to tell the rider he’s back in charge.

Another warning is activated if the vehicle in front brakes harder than the system’s relatively modest automatic braking capability allows, telling the rider he needs to put on the anchors and resume full control of the speed.

The indicators are also wired into the ACC system, telling it that you’re overtaking or changing lanes. When they’re switched on, the radar is set to unlock from the current ‘target’ vehicle more quickly and to lock on to a new one once you’ve completed the overtake or entered the new lane. 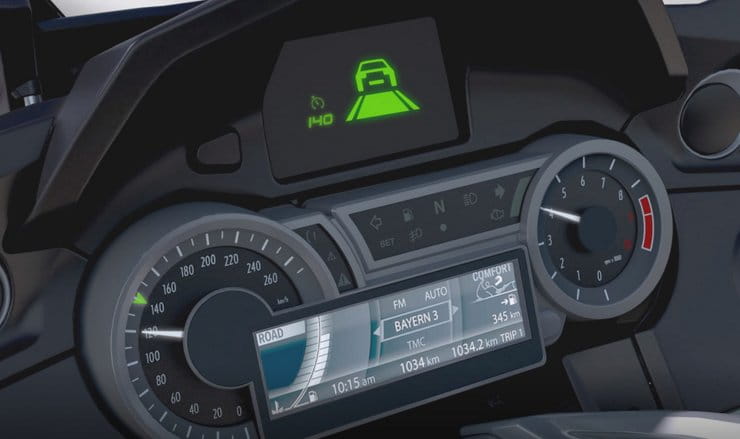 BMW does say that the system has limits, for instance heavy rain, snow or dense fog that could obstruct the radar’s ability to monitor the vehicle ahead. However, Bosch has been developing the bike-mounted radar for several years now, and its rapid adoption by manufacturers suggests it’s a success.

At the moment, BMW doesn’t mention whether it’s going to use the rear-mounted radar sensor that Ducati and KTM are planning to employ as well as the front one. The rear radar is designed to keep an eye on vehicles behind you and warn if they’re either approaching too fast or sitting in your blind spot. 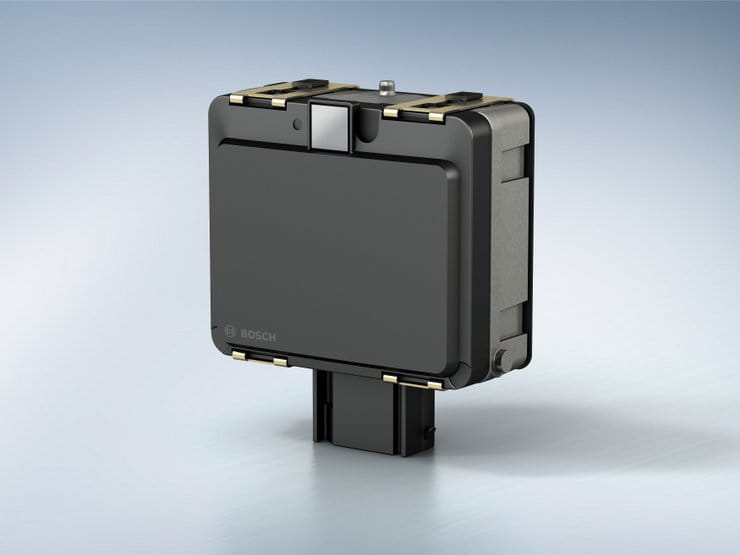 One unanswered question at the moment is one of aesthetics. BMW’s press release and animations showing the system in use don’t show what the radar looks like when it’s fitted to a bike, but spy shots have suggested that it’s a big headache for stylists.

The Bosch ‘MRR Front’ (mid-range radar front) unit measures 70mm across, 60mm high and 30mm deep, and must be mounted with the rectangular front face vertically on the front of the bike with no obstructions ahead of it. There can be a thin, radar-invisible trim panel in front, but it must also be flat and vertical – not a shape that’s easily adopted into the sloping, curved bodywork on the front of most bikes.

KTM’s solution, as seen in spy shots, is to mount the radar in an opening set into the 1290 Super Adventure’s headlight unit. Ducati’s Multistrada V4 has been seen with the rectangular radar sitting uncomfortably between its headlights, and BMW’s R18, in its as-yet-unlaunched faired form, has a panel above the circular headlight that’s replaced by the radar when the system is fitted (the radar appears to be an optional extra, as the sleeker blanking panel is shown on BMW’s design sketches).

Car makers have an easy job hiding radars in false intakes or behind bumpers, but with much less frontal real estate to play with, bike designers face a much greater challenge. With BMW, Ducati, KTM and Kawasaki all likely to show radar-equipped bikes later this year – and potentially other firms, too, as even Benelli’s upcoming tourer appears to be fitted with some sort of front sensor – it will be interesting to see which company wins the competition to disguise the sensor most successfully.