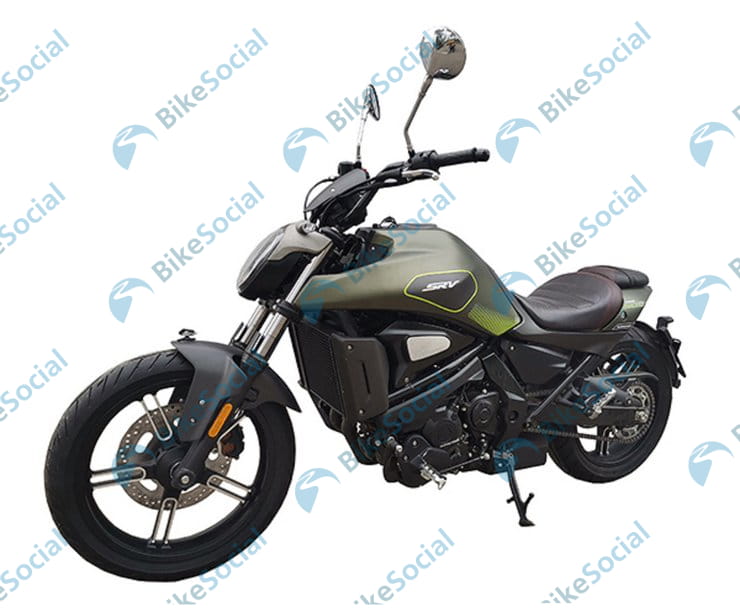 New Chinese brand QJMotor is the latest project from Benelli’s parent company Qianjiang. It’s only officially unveiled one bike so far but has several more in the pipeline and many of them are likely to be offered under the Benelli name in western markets.

Spy shots from China appear to confirm this, showing the ‘QJMotor’ bikes with Benelli logos appearing on their TFT dashboards during start-up sequences, and recent spy shots published in Italy have shown that Benelli’s upcoming TRK800, due later this year, is extremely similar to the planned QJMotor SRB750 despite an official statement that the projects are unrelated.

Now QJMotor is set to launch yet another new model, dubbed the SRV500, which looks a lot like an updated Benelli 502C.

Although the SRV500’s stance is similar to the Benelli 502C’s, with a hint of Ducati Diavel in the silhouette and proportions, and it shares the same 47hp, 500cc parallel twin engine, it’s far more than just a reskin. The frame is new, with a completely different design, and the SRV500 appears to be slightly less sporty than the Benelli 502C in its equipment and geometry.

Specs filed with Chinese authorities as part of the bike’s type-approval show that it has an 18in front wheel and 17in rear, compared to the 17in front/17in rear pairing of the Benelli. The rear of the bike also sits lower, for a more convincing cruiser stance, and the SRV500 has right-way-up forks instead of the Benelli’s USD units and a single front disc rather than two. At the back, a box-section swingarm replaces the Benelli’s tubular design.

Evidence that the bike will be offered as a Benelli as well as under the QJMotor brand is bolstered by the use of a distinctive, protruding mascot on the front mudguard; it’s an unusual styling signature and the only current model to use the same idea is the Benelli Leoncino.

While the lower spec suspension and brakes might seem disappointing compared to the 502C the changes, along with the new frame, have made for a big weight reduction. Ready-to-ride, the SRV500 comes in at 198kg, around 20kg less than the Benelli 502C.

We’re expecting Benelli to unveil a rash of new models this autumn, led by the TRK800 adventure bike that’s sure to be the firm’s best-seller once it reaches production. Will a Benelli-branded version of the SRV500 be among them? It seems likely.