Today sees once again what is traditionally one of the most spectacular auctions of classic motorcycles of the calendar year – the Las Vegas Motorcycle Auction by Bonhams. In previous years the event has not only seen world record-breaking prices but also some of the world’s rarest, most unusual and celebrated bikes, with ultra-valuable Broughs and Harleys, rare road and race bikes and even machines once owned by the likes of Steve McQueen and Elvis Presley – and 2020 is no different. This year’s event takes place at Caesar’s Entertainment Studios, features over 200 lots and kicks off at 12 noon local time on Thursday 23rd January. In anticipation, here’s our pick of the 10 best – and what they’re expected to sell for! 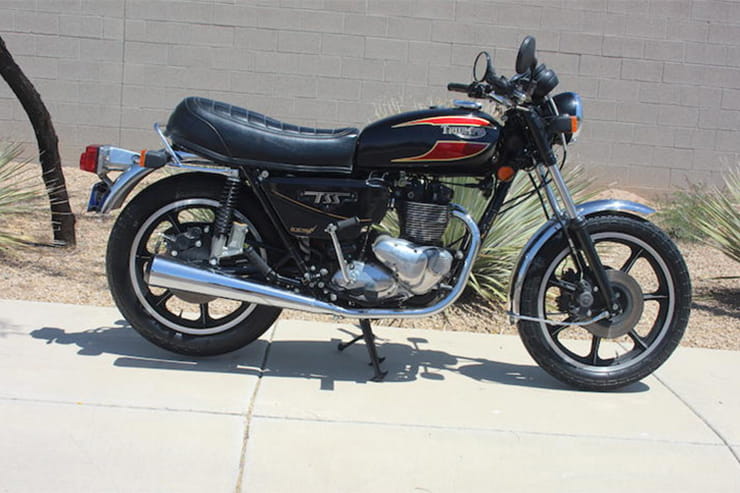 OK, maybe there’s more to celebrate with the success of modern Hinckley Triumphs but there’s no doubt this 1983 Triumph T140SS is significant. In the mid-1970s, when Meriden emerged from the chaos of BSA-Triumph’s disintegration, Triumph stumbled on until the 1980s with just one model – the aging T140 Bonneville. In a bid for sales various versions emerged over the following years including the limited edition ‘Silver Jubilee’. Most were only minor restyling jobs but the biggest update was a new sports model with a Weslake-designed eight-valve head – the TSS. Sadly, like the cruiser-style TSX, it was a case of too little, too late and Meriden called in the receivers in autumn 1983. Building magnate John Bloor bought the Triumph name and rights at that auction (and the Meriden site, which he redeveloped as housing) and the rest, as they say, is history.

This bike, with engine number 032213, is claimed to be the last motorcycle to leave the Meriden production line before the final shutdown, is verified by the Vintage Motor Cycle Club, is in excellent standard condition and has an estimate of just £13,000-£17,000 – not bad for such a historic machine! 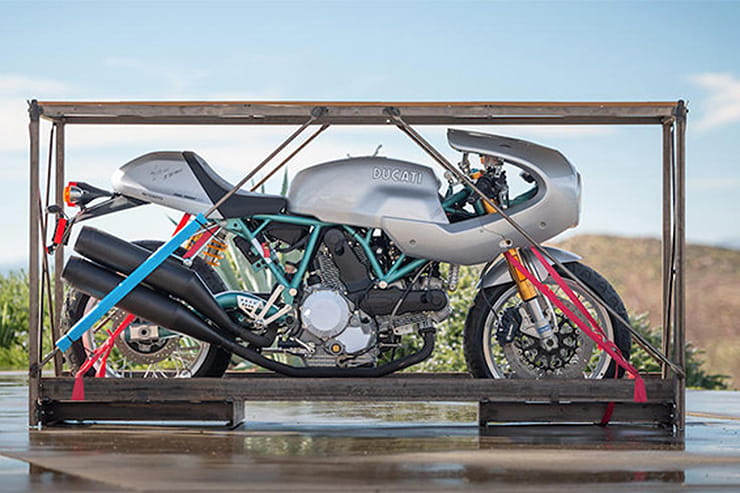 Ducati’s short-lived ‘Sport Classic’ series of the mid-Noughties are today considered as appreciating bikes before their time. These retro-inspired café racers based around modern mechanicals (in this case the proven, air-cooled, 1000DS V-twin) were styled by Pierre Terblanche, predated the modern retro craze, were beautifully detailed and decent to ride – but they didn’t catch on and by 2010 had been dropped. Two models were initially offered in 2005, the naked Sport 1000 and faired Paul Smart LE with a roadster GT1000 coming a year later. The LE, as its name suggest, was a limited edition commemoration of Paul Smart’s 1972 Imola 200 winner and with Ohlins and just 2000 built was a jewel that’s become a true £20K collectors’ item today. This example, still in its crate and with 0-miles as a result, is probably unique and has a tempting estimate of £19-25,000. 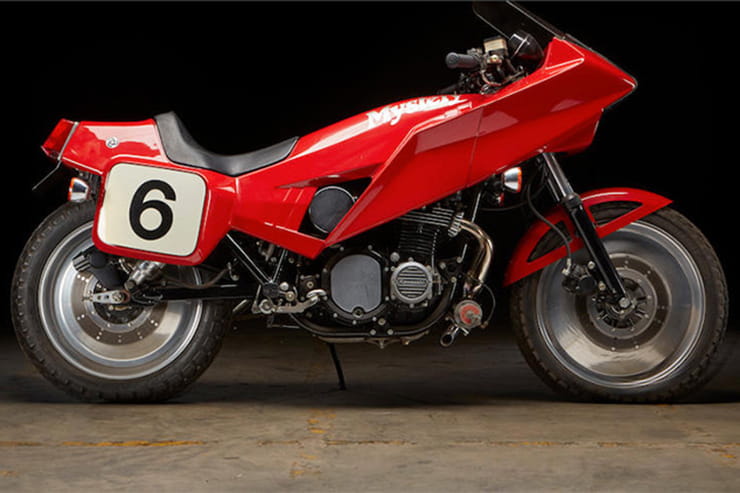 1970s motorcycles don’t get much more exclusive and ‘glam-rock’ than the Vetter Mystery Ship and, with just 10 built and this, the best of just two turbo-charged examples and with just two miles on the clock, is surely the rarest and most desirable of them all.

Basically a re-bodied, tuned Kawasaki Z1000, it was designed and built by the hugely influential American stylist Craig Vetter who built a business with pioneering aftermarket ‘Windjammer’ motorcycle fairings and the like and is most famous for styling the iconic, three-cylinder Triumph X-75 Hurricane. The Mystery Ship, with its pioneering, all-enclosing bodywork and tuned Z1000 engine was intended to be one of 200 built at a price of $9999 (or three times a stock Z1000) but just 10 were actually completed. This, built in 1980, is number six and one of just two also fitted with an RC turbocharger. It also has solid disc wheels, another factory option with its spec and rarity explaining its £19,000+ pre-sale estimate.

Talking of turbos, people tend to assume the turbo bike era was the early-to-mid 1980s when, first Honda, with its CX500 Turbo, then followed by Yamaha, Suzuki and Kawasaki, with their XJ650T, XN85 and Z750T respectively, followed suit, all to ultimately fail. But, in truth, Kawasaki got their first with its Z1R TC in 1978.

A US-only machine based on the already sporty, headlamp-faired Z1R the Z1R TC was created in 1978 by Kawasaki USA. Then VP, Alan Masek, faced with Kawasaki’s then Z1000 being overtaken by the latest Honda, Yamaha and Suzuki, offered to buy 1000 Z1-Rs direct from the factory and duly bolted on a Ray-Jay turbocharger, different exhaust and carb and gave the resulting 130bhp beast a new paintjob. In the end, just 500 were built over two years with this survivor being rare indeed. It has an estimate of £15-19,000. 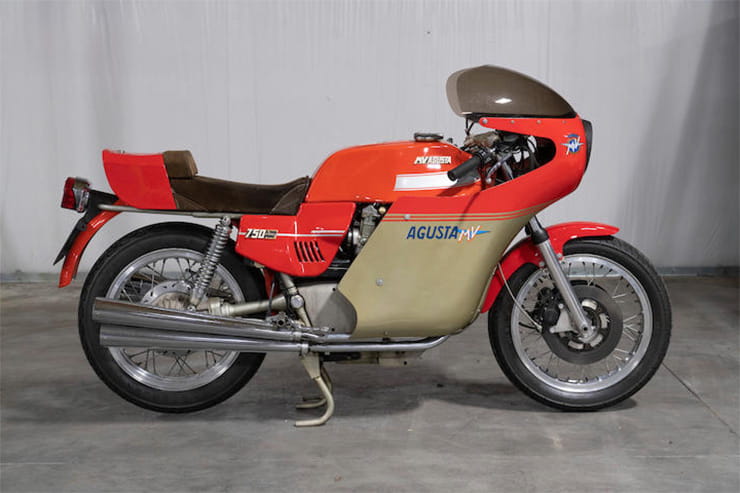 The most desirable MV Agusta of all?

All classic MV Agustas are up there with classic motorcycle royalty, being the road-going variants me or you could buy of the most dominant grand prix machine of the 1950s, 60s and early ‘70s. But the pinnacle machine of all of them is surely the 750S America.

MV’s first road-going four, a 600cc tourer, arrived in 1965 but the public demanded more. A 750GT followed in 1969 along with a sportier 750S. Then, in 1974, MV America convinced the Italian firm produced an even more extreme example displacing 789cc to produce 75bhp with all-new styling. Barley 500 were built before MV’s motorcycle production finally stopped in 1979 with this one, immaculately maintained for the last 15 years, known to be among the best – as it should be with an estimate of £58-62,000! 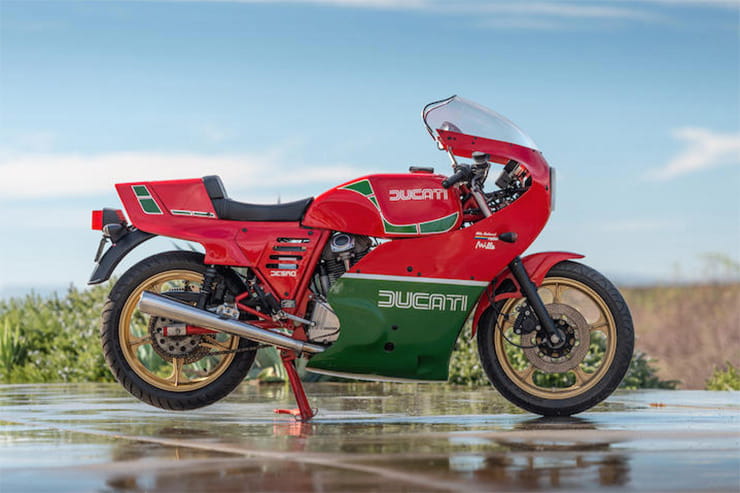 How about this for another ultra-desirable piece of Italian exotica? Although Ducati’s commercial fortunes in the early 1980s were desperate, to say the least (ultimately leading to Cagiva’s buy-out in 1985) its sports and superbikes were largely generally as well revered as they are today – and the standout bike was surely the MHR1000.

Inspired by and intended to replicate the machine on which Mike Hailwood rode to his legendary F1 TT victory in 1978 (although that bike, strictly-speaking, was an NCR racer prepared by Sports Motorcycles)

The first MHRs came out in 1979 and were based on the then 900SS with different bodywork, improved Brembo brakes, Campagnolo wheels and more. But in 1984 this was bored and stroked to 973cc, gained a host of other mods and is generally considered, if not the original, then the best of the breed. This one’s in excellent condition, has been dry stored and has an estimate of £15-19,000. 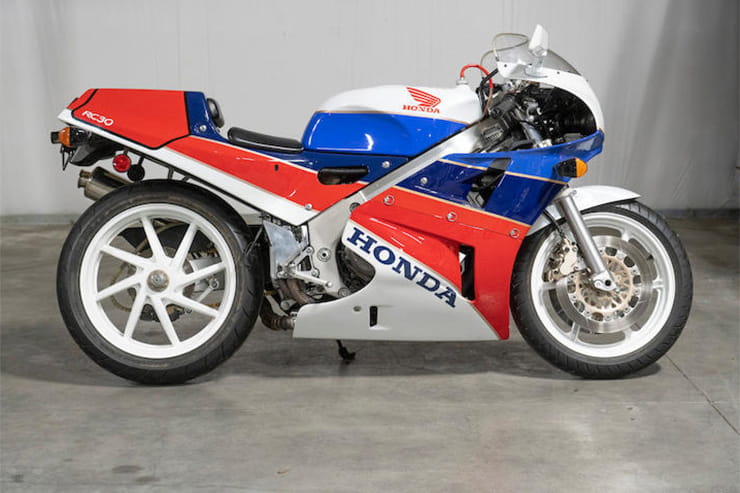 Racer replicas don’t get much more revered than Honda’s legendary RC30 and with good reason: built by Honda in a ‘no-holds barred’ attempt to scoop the new, production-based world superbike championship it did exactly that first time out in 1988, doubling up in the hands of Fred Merkel the following year. It won the world F1 championship with Carl Fogarty fresh out of the box, too, along with setting the benchmark in TT and endurance racing, as well. There’s no need to go into its impressive tech and abilities here, but, already a modern classic, this completely original and unraced example with just 1585kms on the clock is surely among the best, justifying its £58-65,000 estimated price. 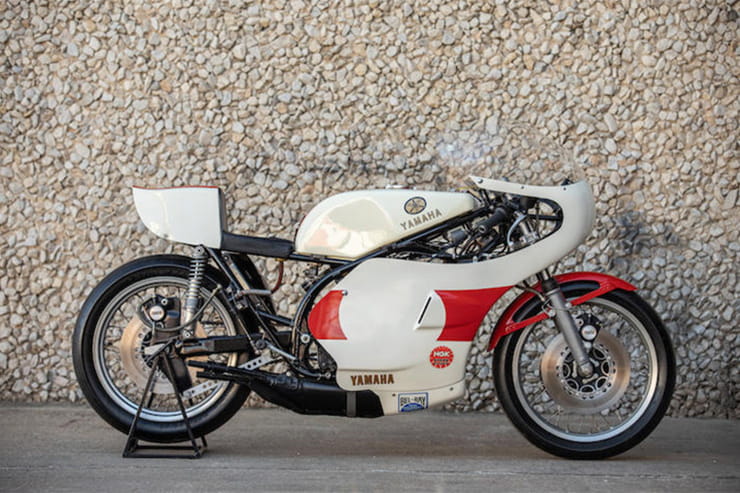 Another iconic production ‘racer’ up for grabs at the Las Vegas auction is this immaculate Yamaha TZ750. Introduced as the TZ750A in 1974, the four-cylinder two-stroke was Yamaha’s biggest production racer yet, was fearsomely fast and for the first time gave privateers the chance to be competitive against the factory teams as, in Britain, a young Rocket Ron Haslam proved. Newly-arrived from MV, Giacomo Agostini gave the TZ its first race win, at the 1974 Daytona 200 from whence it went on to win Daytona nine consecutive times. This 1976 example is the last of the twin-shock originals and has been immaculately restored, explaining its £38-46,000 estimated price. 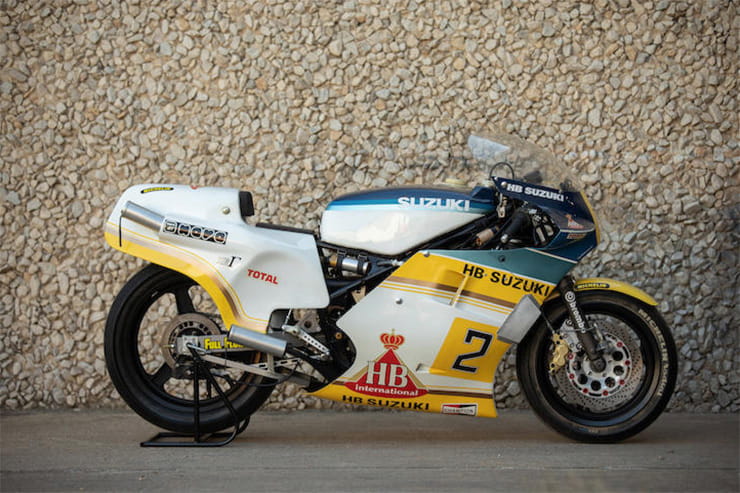 Another iconic production racer from the late 1970s and early 1980s on offer at the Las Vegas auction is this late-model Suzuki RG500. Dating from 1982 it’s a later Mk VII model of the bike Britain’s Barry Sheene rode to his two 500cc world championship and then tasted again at the end of his career in similar ‘HB’ colours to this in 1983. Based around the same square-four two stroke as the earlier Sheene machines it was one of the most successful 500cc GP machines of all, winning further titles with Franco Uncini and Marco Lucchinelli before finally being outpaced after 1981. During that time the RG amassed a total of 50 GP wins and seven consecutive constructors’ championships. This example was first raced in 1983 before being later retired and restored as a replica of Randy Mamola’s 1982 machine. Unridden since, it’s in immaculate condition and has an estimated price of £37-45,000. 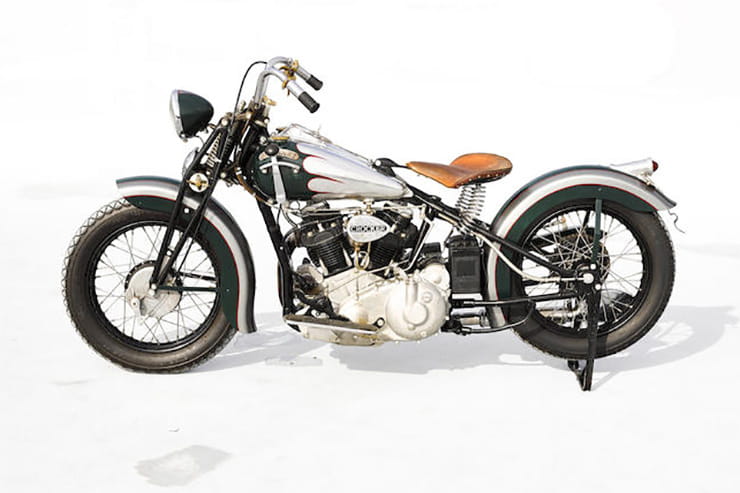 And finally, how about this? An ultra-rare American Crocker (no, we’re not that familiar with them, either) considered so desirable it’s been given an estimated auction price of a whopping £350-420,000, which, if achieved, will make it some kind of record.
Little-known Crocker is the Brough-Superiors of US motorcycling. Founded by perfectionist Al Crocker in Los Angeles, they produced limited numbers of performance, hand-built V-twins for which Crocker himself promised to return the purchase price if ever one of his machines was outrun by better-known rivals from Harley or Indian. He never had to do so. What’s more, this example is one of the ultra-rare ‘Big Tank’ models of which just 30 were built before Crocker turned to Douglas aircraft production to aid the war effort. Motorcycle production never resumed. It was also formerly owned by Crocker employee Elmo Looper and has been immaculately restored.  Of the 100 highest performing motorcycle sale prices at auction in Vegas in recent years, 15 have been Crockers. This bike looks set to join that celebrated list.