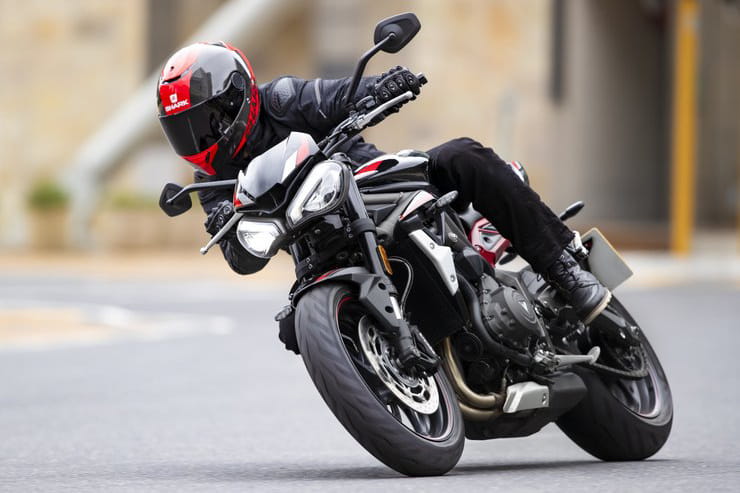 Some people are going to be really angry about Triumph’s new 2020 Street Triple R. Specifically we’re talking about anyone who’s just paid full list price for the outgoing model, because the new bike isn’t just better than its predecessor but cheaper as well.

When a manufacturer unveils a revamped model it’s common for the price to be announced later. That’s not necessarily because they don’t know what it will cost but because new bikes are almost inevitably pricier than their predecessors. It doesn’t make good PR sense to have stories bemoaning extra expense when they could be focussing on technical improvements. Triumph is bucking both trends with the new Street Triple R; trumpeting its £8900 list price at the bike’s unveiling because it’s a full £400 cheaper than the lower-spec model it replaces. If you recently paid £9300 for a 2019-spec version, you might be understandably miffed, but for anyone else that’s got to be good news. 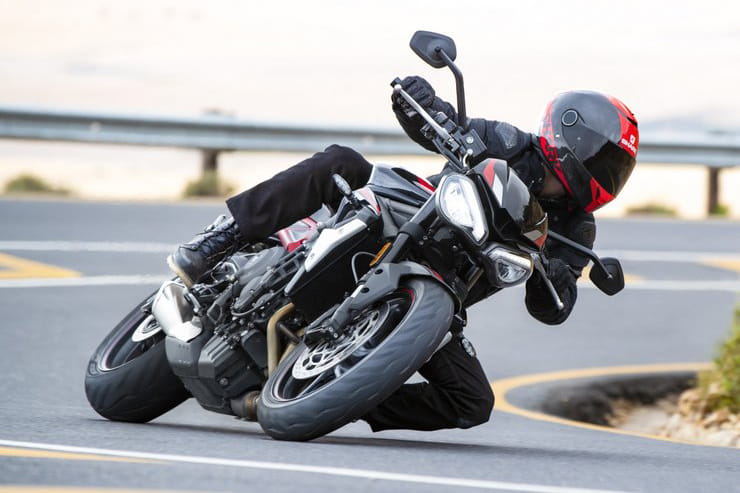 The Street Triple R is the middle model in the 2020 Street Triple range, sitting between the A2-licence-friendly, 660cc, 47hp (94hp when derestricted) Street Triple S – which costs £7900 – and the 121bhp, 765cc, £10,300 Street Triple RS. The R’s mid-point pricing and spec arguably put it at a sweet spot in the line-up, even though UK buyers have tended to levitate towards the pricier RS model which typically outsells the R at a ratio of around 2:1.

With 116hp (118PS) at 12,000rpm and 57lbft (77Nm) at 9400rpm, the new Street Triple R’s headline figures are unchanged from last year’s model, lagging 5hp and 1.5lbft behind the RS, which also peaks a few rpm lower in the rev range. But the numbers don’t tell the full story, as the engine has actually been heavily revised to both meet Euro 5 emissions rules and improve its responsiveness.

Triumph says the 765cc triple has 7% less rotational inertia, making it quicker to react to the throttle, and revisions to the exhaust and airbox to improve emissions and the noises it makes.

Importantly, the 2020 Street Triple R also adopts the up-and-down quickshifter as standard. It was previously a £330 dealer-fit option, so that £400 price cut is actually more like a £730 saving, even without taking other improvements into account. 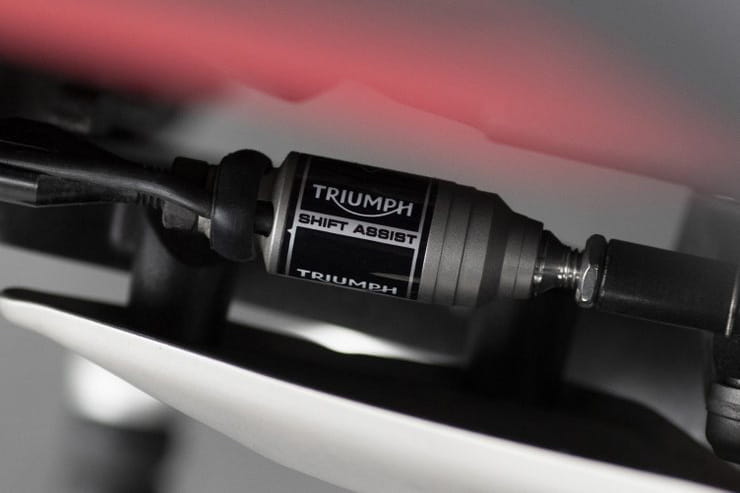 Those other changes are largely related to styling. The old Street Triple’s slightly blobby headlights were always a bone of contention, lacking the retro appeal of old-school circular lamps but stopping short of the slanted slickness favoured by many more modern designs. The 2020 style – already seen on the S and RS – goes full-LED in terms of tech, allowing for smaller, slimmer light units, and opts for an aggressive look that might not appeal to all but at least comes down firmly in the ‘modern’ camp. Distinctive illuminated eyebrows appear once the ignition is turned on, giving the bike a disgruntled look that will probably encourage dawdling drivers to get out of the way.

The flyscreen above the lights is new, too, as are the vestigial side panels. The tail is tweaked to gain air tunnels either side of the pillion seat. It’s a look that debuted on the RS version, although the R does without the more expensive bike’s bellypan. 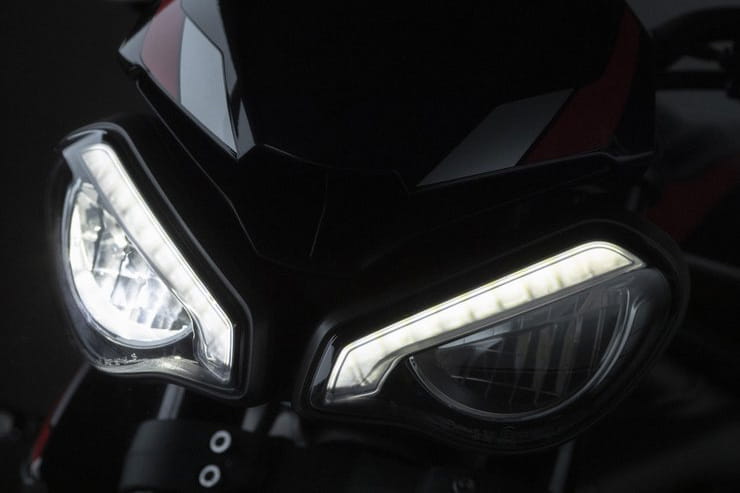 When it comes to the chassis, everything is pretty familiar. The suspension is from Showa at both ends, with spec that sits between the cheaper S and the pricier RS, as you’d expect. The 41mm forks are Showa’s fully-adjustable separate function Big Piston units (SF-BPF), compared to the non-adjustable Showas on the S and the full BPF units on the RS. At the back there’s a Showa monoshock, again fully adjustable for compression, rebound and preload, where the S uses a preload-only adjustable unit and the RS has an Ohlins STX40.

Brembo’s M4.32 monobloc four-pot front brake calipers similarly sit between the S’s 2-pot Nissins and the RS’s Brembo M50s. It’s all the same kit that the previous model used, and that’s no bad thing. Overall, the step up compared to the S – particularly when accounting for the more powerful engine and standard quickshifter – seems much greater than the £1000 price difference would indicate. 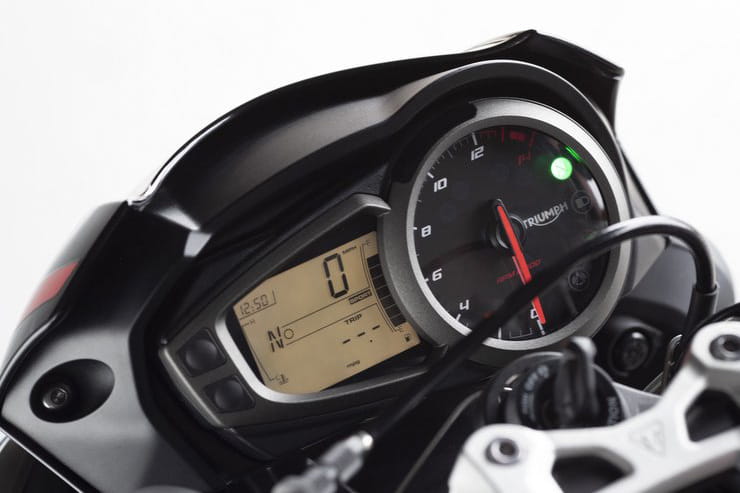 There is one notable, and surprising, downgrade on the 2020 Street Triple R: its instruments. The previous generation featured the same full-colour TFT dash as the RS, but for 2020 the R steps down to the same part-analogue, part black-and-white LCD instruments that are used on the S model. Clearly Triumph has had to save money somewhere, and this looks like where it’s done it. You still get three riding modes, though – rain, road and sport – with ‘rain’ cutting power to 98hp. Traction control is also standard to add a further safety net.

Truimph says the Street Triple R’s new spec is tailored to reflect customer feedback, so presumably potential buyers have said they’d happily sacrifice the eye-candy of a TFT dashboard in favour of the practicality of a quickshifter.

Of course, while you can ride away on a Street Triple R for £8900, Triumph would rather persuade you to part with more cash and that’s why there’s a host of options available. More than 60 of them are in the catalogue, from exhausts and styling tweaks to luggage and heated grips. As in the past, there’s also the choice of buying a Low Ride Height version of the Street Triple R, with the seat dropped by 45mm to 780mm thanks to a different seat and revised suspension settings. 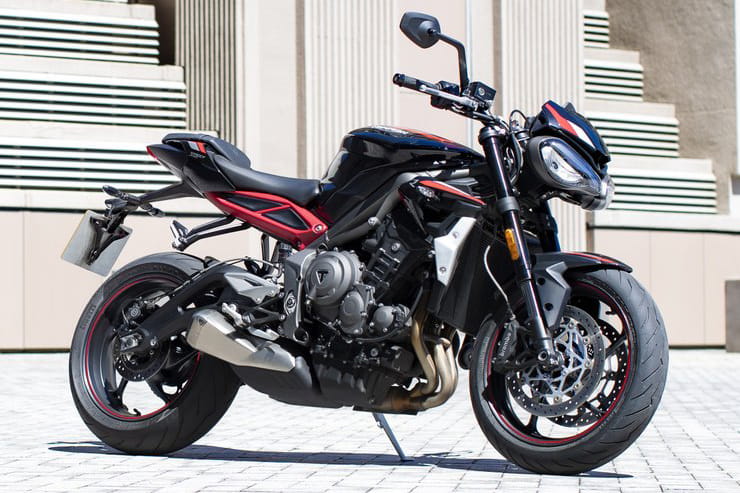