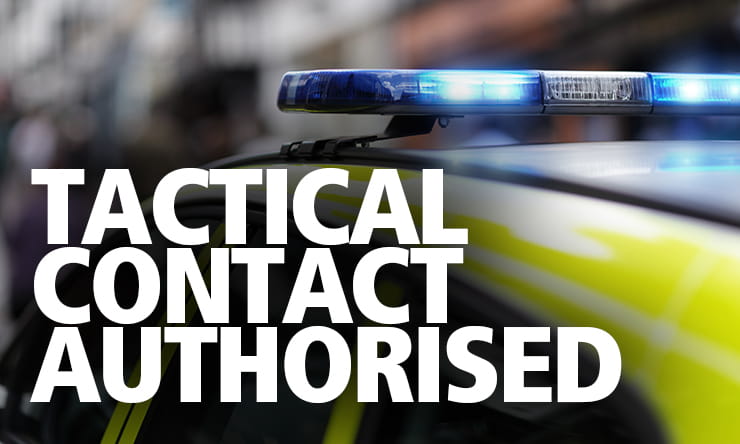 The Independent Office for Police Conduct (IOPC) has issued updated guidance to help officers use tactical contact more safely during scooter pursuits, which means the rules are clearer when it comes to knocking criminals from stolen powered two-wheelers.

Scooter and moped-enabled crime has been most prevalent in the London area, but the guidance changes have been issued to all chief constables in England and Wales by the National Police Chiefs’ Council’s (NPCC) Lead for Police Pursuits.

The updated guidance acknowledges tactical contact as a legitimate use of force for appropriately trained police drivers where authorised – key in giving them the confidence to carry out their jobs without fear of prosecution. It also seeks to ‘better support police officers in carrying out their assessment of the situation and risks posed’. The guidance covers issues like the use of alternative tactics, weighing up the severity of the suspected offence and the likelihood of causing injury to the riders, others and themselves. It also reinforces that the use of the tactic must be authorised.

“It’s critical that police officers using their powers to detain suspected offenders have clear, unambiguous guidance to support them in carrying out their difficult roles,” said IOPC interim Deputy Director General Jonathan Green, “and that the public have confidence that any dangerous situations created by police pursuits are brought to an end as swiftly as possible.

“A number of our recent investigations have identified learning highlighting the need to clarify when it is appropriate to use tactical stop powers, and this learning has helped inform the new guidance.”

NPCC pursuits lead, Assistant Chief Constable Steve Barry said that “Offenders on mopeds and motorcycles who attempt to evade the police are making a choice that puts themselves and others at risk. The public expect us to intervene to keep them safe. Highly trained police drivers are tasked with weighing up the risks and deciding upon the most appropriate tactics in fast-paced circumstances.”

Chief Superintendent Colin Wingrove, from the Met’s Roads and Transport Policing Command, added that; “The MPS [Metropolitan Police Service] is committed to tackling moped-enabled and violent crime in London and the public rightly expect us to make London safer. We welcomed the opportunity to influence the development of new national guidance for our officers and staff who undertake pursuits by working with NPCC, IOPC and colleagues.

“The updated national-approved policing practice for pursuits aims to provide greater support for our highly-trained police drivers in making dynamic and spontaneous decisions to bring pursuits to a safe conclusion. The guidance also provides greater transparency and confidence for the public in the tactics police use when offenders seek to commit crime and avoid capture.

“Our aim is to reduce the risks posed to themselves and the public, and our officers who are placed in a difficult situation in bringing those offenders to justice and making London safer.”

The IOPC’s proposals have been informed by learning from five investigations involving tactical contact with two-wheeled vehicles. Conduct issues did not feature in all of them, but they did highlight risks to police, riders and the public due to a gap in policy around use of the tactic…

• A misconduct meeting decided that a Metropolitan Police officer will receive management action following an incident in Erith where he used a police vehicle to halt a 17-year-old rider on a stolen moped. Tactical contact had been authorised. The teenager, who was not wearing a helmet, was knocked unconscious and sustained a fractured skull, fractured foot and eye socket in the incident in November 2017. The misconduct panel did not find misconduct proven in relation to the use of tactical contact but determined that the officer should receive formal management action around how his justification for using it had been presented. The IOPC investigation ended in January this year.

• The MPS agreed that an officer – who was not trained in Tactical Pursuit and Containment (TPAC) – should face a misconduct meeting over an incident in Ealing in March 2018 where he used a police car to stop a man on a motorcycle. Misconduct was not proven at the meeting and the panel agreed ‘No Further Action’ in relation to the use of tactical contact when not trained. The officer will undergo reflective practice/learning in relation to the writing of notes to justify use of force. The motorcycle had earlier been travelling at speeds of up to 80mph. The impact resulted in a broken leg for the motorcyclist when he collided with a lamp-post. The IPOC investigation ended in April this year.

• An IOPC investigation found police officers acted appropriately during a pursuit in Ruislip in February 2019 that ended when two teenagers were knocked from a moped after authorised tactical contact. The driver was uninjured but the 15-year-old passenger sustained serious facial injuries. Neither was wearing a helmet. The officer driving the police car was TPAC trained and other tactics to resolve the pursuit had proved unsuccessful. The investigation  was completed in June.

• An MPS officer will face a misconduct meeting over tactical contact with a moped being ridden by a 14-year-old boy in Uxbridge in February 2018. The moped had mounted the pavement on a residential street. The police car was being driven by a TPAC trained officer. The boy sustained a broken leg in the incident. The investigation was completed in May this year.

• An IOPC investigation found tactical contact was used effectively to apprehend two men on a moped who had just robbed a woman pedestrian of her mobile phone after mounting the pavement in Hackney Road, east London on 21 June this year. There was no indication that the TPAC-trained police driver breached MPS policies. The IOPC found that the police driver proportionately and competently executed his duties, deploying an approved tactical technique to apprehend the suspects and to protect the public. The men, aged 18 and 20, have since received prison sentences for the offence.