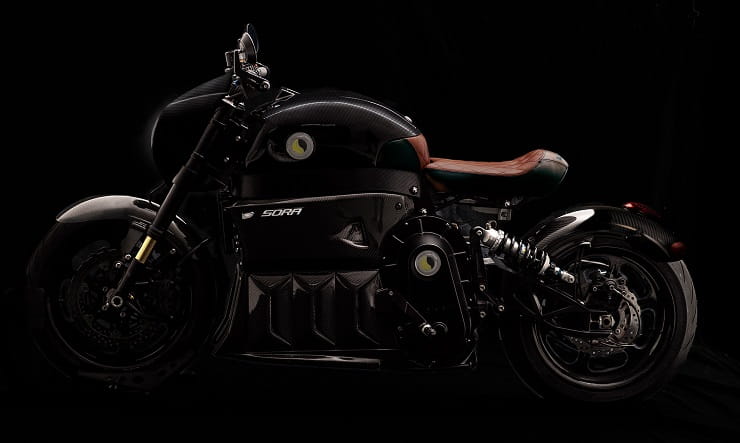 The annual Quail Motorcycle Gathering is where you’ll find the most well-heeled motorcycle fans so it makes sense that Canadian firm Lito launched its second-generation Sora electric bike at the event over the weekend.

That’s because while it may be many things, the Sora could never be described as cheap; coming in at a massive $82,250 (around £63,000), this isn’t the bike that will bring electric power to the motorcycling masses.

Just 20 of the machines are scheduled to be made, and while they look much the same as the original version of the Lito Sora from back in 2014, there have been significant improvements under the carbon-fibre skin. Most importantly, the range is boosted from 124 miles to 180 miles, while top speed rises a fraction from 118mph to 120mph and the 0-60mph time is slashed from 4.5 seconds to just 3 seconds. It’s all courtesy of a 108hp electric motor, along with weight reduction from 260kg to 249kg.

Not long ago, those would have all been remarkable numbers for an electric bike, but technology is moving fast and already this year we’ve seen two new models launched that offer more impressive numbers and at a far lower price. Market leaders Zero debuted the SR/F, touting 110hp and a 200 mile range (when fitted with the ‘Power Tank’ additional battery), along with a 124mph top speed, all with a starting price as low as £16,490. And Lightning’s new Strike promises even more impressive numbers with up to 120hp depending on which model you choose, with a 150mph top speed and a 200 mile range for the top model. Even that highest-spec version is under $20,000 in America – less than a quarter of the price of the Sora.

While it’s not easy to make an argument for the Sora on the basis of performance, there’s always been a market for high-end cruisers that sell on their looks, workmanship, materials and exclusivity, so we’ve no doubt Lito will be able to find 20 willing buyers among the well-heeled guests at Quail.