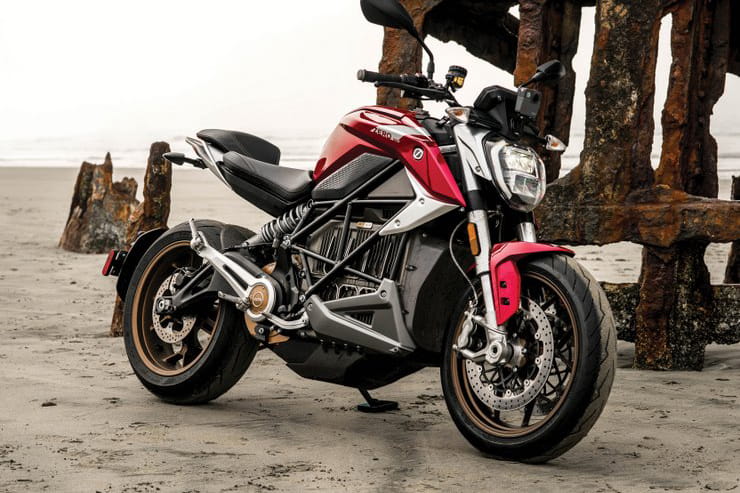 For the last decade electric bikes have been gathering on the fringes of mainstream motorcycling but repeatedly failing to deliver a killer blow of performance, price and practicality to allow them to challenge the century-old dominance of the internal combustion engine.

But Zero’s newest machine, the SR/F, appears to get closer than ever to achieving exactly that, combining 110hp and an impressive 190Nm (140lbft) of torque with a range of up to 161 miles and a £16,490 starting price once the Government’s £1500 plug-in motorcycle grant has been taken into account. That’s expensive, sure, but not a million miles from petrol-powered bikes that the SR/F competes against. It certainly makes the expected £25,000-£30,000 price of Harley-Davidson’s forthcoming LiveWire electric bike seem steep. 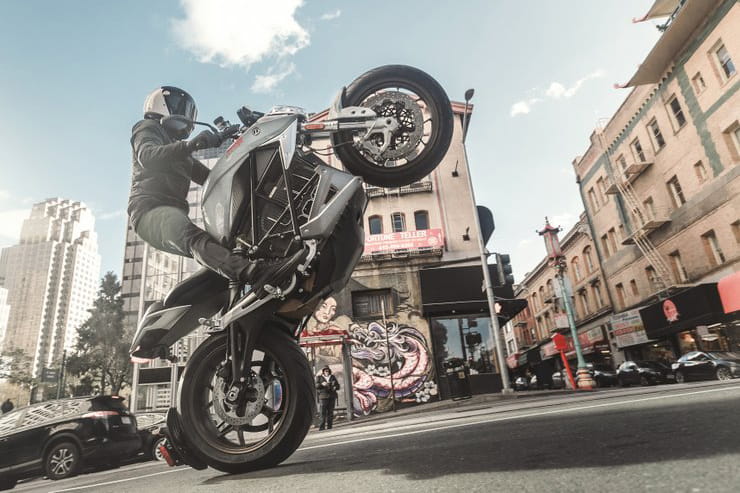 Before we delve into wider specs of the Zero SR/F, let’s examine those performance and range figures a little more closely.

Thanks to the way power is measured, electric bikes usually have two maximum power numbers, and they’re often a long way apart. The claimed 110hp that the SR/F manages is a peak that’s available for short periods; sustain it for too long and the motor is likely to overheat. In that respect, it’s comparable with the peak power claims of petrol-powered bikes – you wouldn’t expect them to run indefinitely at maximum revs and wide open throttle for hours on end without suffering, and it’s simply never necessary in either road or track use to do it.

However, unlike petrol bikes, electric bikes are also given a ‘continuous’ maximum power rating, which is basically how much the motor can make for extended periods. For the SR/F, that continuous maximum is 54hp – less than half the 110hp overall peak power.

That might not be a bad thing. Lawmakers use the continuous maximum power number rather than the peak power when it comes to categorizing bikes, so as far as the government is concerned, the SR/F is a 54hp bike despite its 110hp abilities. Notably, that means it would take only a small tweak to bring it below the 47hp limit imposed on A2 licence holders.

The torque figure – 190Nm – is impressive however you look at it. It’s a big jump compared to the 110Nm that the best of Zero’s existing range manages. As with all electric bikes, that peak torque comes at minimal revs – nearly a standstill – and tails off as the motor’s speed increases. Basically, the motor can put out something near its maximum power at any revs, and since power is a function of torque multiplied by speed, torque inevitably drops as revs increase.

To put the torque into perspective, consider that a Ducati Panigale V4 achieves a peak of 124Nm – around 35% less than the Zero manages. However, the Ducati, like most petrol bikes, has the advantage of a gearbox to multiply that torque before it reaches the rear wheel, where the Zero uses a fixed 4.5:1 final drive ratio.

So don’t necessarily expect the Zero to out-accelerate a Panigale. At the rear wheel hub its fixed gear ratio multiplies the bike’s 190Nm of torque to a stomping 855Nm. But in 1st gear the Panigale’s 124Nm is multiplied far more, giving a theoretical maximum of some 1552Nm at the rear hub.

Even so, the Zero’s torque will feel immense, particularly as it comes in a single gear that will seamlessly drive the bike all the way from standstill to a claimed top speed of 124mph. Like the peak power, that top speed can only be achieved for a limited amount of time – for sustained high speed runs, the Zero will be limited to 110mph to preserve the motor and electronics. 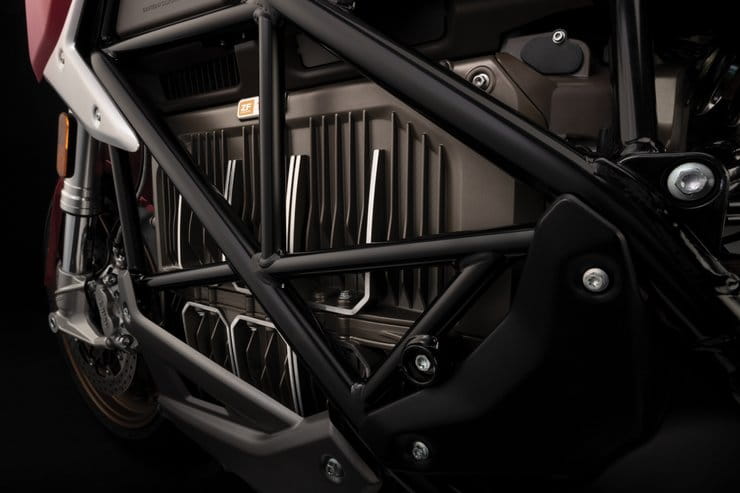 Like the Zero’s performance figures, its range and recharging numbers are subject to various caveats and conditions.

The maximum range on the standard battery is listed at 161 miles, but that’s in low-speed city use. Add the extra ‘Power Tank’ battery and the maximum is upped to 200 miles.

However, Zero also claims a baffling array of alternative ranges, each depending on usage. At 55mph it will achieve 99 miles on the standard battery pack, and if you up the speed to 70mph, the range comes down further to 82 miles.

Over a standardised European test of varied riding conditions, Zero expects the bike to manage 98 miles on each charge. Whether that’s enough or not will, of course, depend on how you use your bike.

Recharging is another complex area, particularly since it’s the distinguishing feature between the two versions of the SR/F that Zero will initially offer. The ‘Standard’ model uses an integrated 3kW charger, which means it can get a 100% charge after being plugged in for 4.5 hours, or a 95% charge in 4 hours. The SR/F ‘Premium’ has a 6kW integrated charger, which roughly halves those times.

Both versions can also be used with rapid chargers using the widely adopted ‘Level 2’ charge station standard, slashing those charge times. On the ‘Standard’ the 100% charge can be reached in 1.8 hours, or 95% in 1.3 hours, and the ‘Premium’ achieves the same targets in 1.5 hours and 1 hour respectively.

However you spin it, filling a petrol tank is still much quicker, but on the flip-side you can’t refill your ICE bike by plugging it in overnight at home… 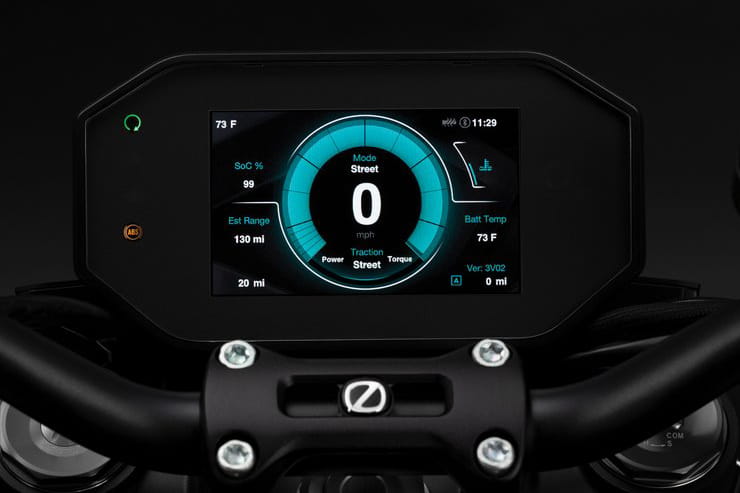 One of the huge – but largely untapped – areas where electric bikes have the potential to outstrip their petrol rivals is the field of electronic rider assists; traction and stability control in particular.

While modern sensor technology, like Bosch’s IMUs, mean it’s easier than ever before for on-board computers to know how a bike is behaving, the nature of combustion engines means it’s hard to use that data to directly influence the bike’s power delivery.

Electric bikes have no such hurdles, so Zero should be able to get an edge on the competition here. It’s hoping to do so using its ‘Cypher III’ operating system, which ties in with a Bosch stability control set-up, the TFT dashboard and even a phone app.

Zero’s claiming ‘best in class’ ABS brake control both in a straight line and corners, plus traction control and ‘drag torque control’ – equivalent to an engine-braking control system.

The system has four pre-programmed riding modes – Sport, Street, Rain and Eco – plus up to 10 programmable custom settings.

Cyper III also allows you to remotely monitor the bike, giving you updates on its charging status and alerting you to problems, for instance unexpected motion or tip-over or simply a power cut that interrupts the charging process. It also has a ‘find my bike’ function, in case you’re careless enough to lose it (or, more nefariously, someone else relieves you of it).

The system also lets you share riding data including location, speed, lean angle, power, torque and state of charge, and to download system updates over the air with two years of free connectivity after purchase. 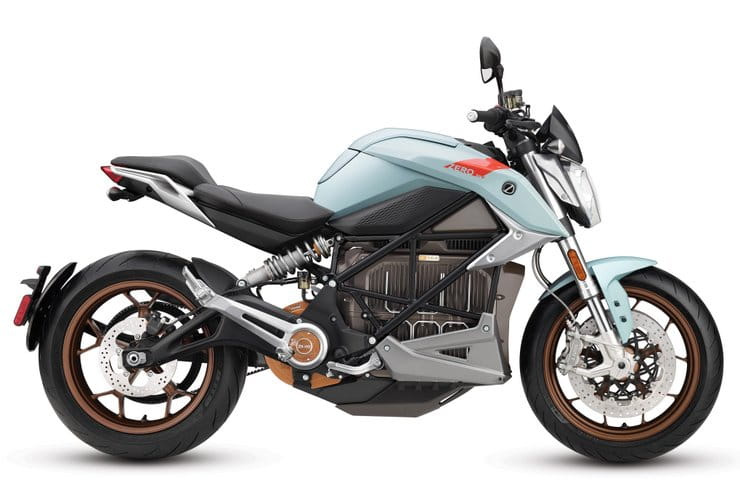 Of course, there are some conventional technologies on the Zero SR/F, too. Its air-cooled AC motor and Li-Ion battery are bolted to a steel trellis frame, with an aluminium swingarm that pivots around the motor’s axle to guarantee consistent tension for the final drive belt.

Up front there’s a pair of Showa 43mm Big Piston forks, matched by a Showa rear shock, with full adjustability for preload, compression and rebound at both ends.

The J-Juan radial brakes might not have the cachet of Brembos, but they’ve long been Zero’s favoured brand and should be up to the job of hauling the 220kg machine to a halt. That’s a ready-to-ride weight, of course – there’s no increase when you ‘fill the tank’ as there would be on a petrol bike. The Premium version, with its built-in 6kW charger, is 6kg heavier at 226kg.

Given that most buyers are going to be new to both Zero and to electric bikes, the fact that the whole machine has a two-year warranty is reassuring, with five years and unlimited mileage warranty cover for the battery and, if specified, the additional Power Tank.