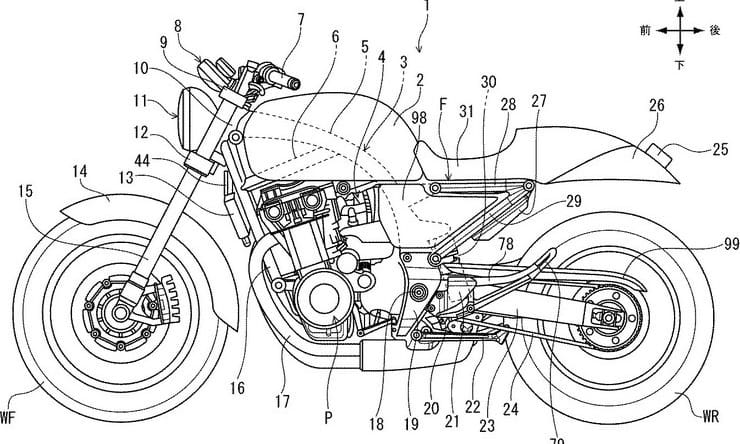 Honda’s CB400 Super Four has been on sale in Japan for more than quarter of a century and has forged a strong reputation over here as a grey import despite never getting official European sales. It’s been around so long that it’s hard to imagine a significant change to its design but this new patent application filed by Honda in Japan suggests there could be a new version in the pipeline.

The CB400SF and its faired derivative, the CB400 Bol d’Or, are keystones of Honda’s Japanese range, along with the visually-similar CB1300 models, but as with so many older designs they’re facing extinction under increasingly severe emissions limits.

While we don’t know for certain that the design seen in this Japanese patent application relates to a new CB400 Super Four, it certainly ticks several boxes. First up, the engine is described as a four cylinder, and visually it’s around the right size to be a 400cc motor. It also bears similarities to the existing CB400SF’s engine in terms of layout, and in its use of a relatively small radiator, suggesting that while it’s liquid-cooled, the engine may not be tuned for out-and-out performance. The bike’s double-sided swingarm also appears similar to the CB400SF’s.

The rest of the chassis is new, though. It’s a backbone design, made mainly of steel but with aluminium side plates at the swingarm pivot point. The design is similar in concept to that of the CB1000R, but far from identical to that bike’s frame. Compared to the existing CB400SF, the backbone frame with no under-engine cradles is quite different, and it notably represents a chance from dual shocks to a rising-rate monoshock rear suspension system – an area that the patent application notably focuses on.

The seat subframe is aluminium and made in two sections, with a second part providing support for a pillion seat. Both the rear subframe section and the pillion pegs appear to be designed to be removable to convert the bike into a true single-seater.

Up front, a set of radial brake calipers is clear to see, but the patent drawings don’t reveal whether the bike is intended to use conventional or upside-down forks.

One area that the patent does focus on is the front indicators, which are unusually mounted just below the brake and clutch master cylinders. It’s a layout that helps keep the styling neat without going as far as using bar-end indicators. Intriguingly, the patent also shows a version of the bike fitted with hand guards that are cut away to ensure the indicators remain on view, suggesting that Honda could be planning to make a scrambler-style model from the same basic building  blocks. 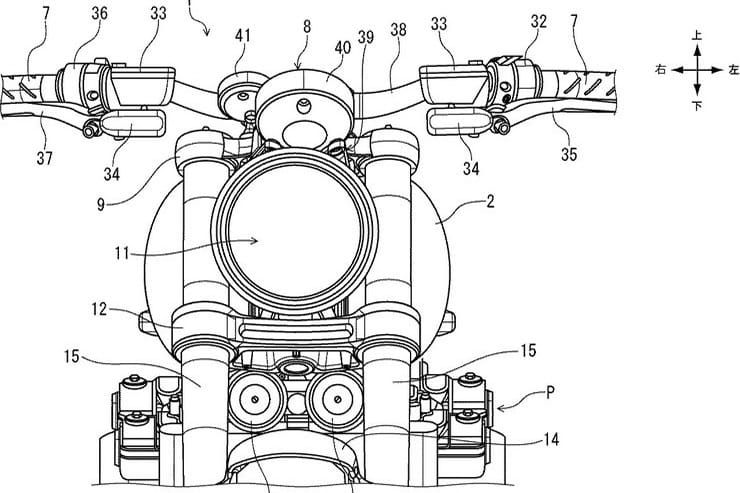