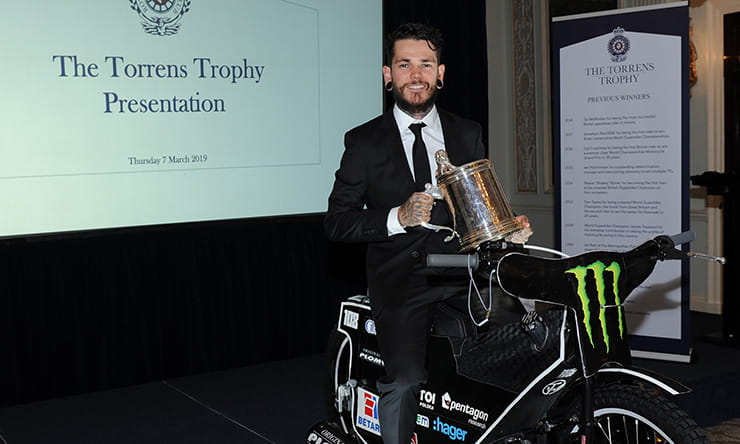 Barrie Baxter, Chairman of the Torrens Trophy Nominations Committee said, “2018 was a fantastic year for motorcycle racing. The Birchall brothers Ben and Tom had us on the edge of our seats with their spectacular showdown victory at the final round in Germany when they secured the 2018 FIM World Sidecar Championship. Leon Haslam won the British Superbike Championship and dominated the whole racing season, taking 15 race wins and finishing 70 points clear of his nearest rival - plus Peter Hickman won both the Superstock and Senior Isle of Man TT races and set a new outright lap record of 135.452mph. All of which were worthy contenders for the 2018 Torrens Trophy. However, the Committee unanimously agreed that Tai Woffinden should be honoured for not only his outstanding racing achievement but representing Britain on a world stage.”

He continued, “To be World Champion in something as demanding as speedway is very special but to do it three times is a remarkable achievement and one that deserves far more recognition than it currently receives.”

Previous winners of the Torrens Trophy:
• 2017 Jonathan Rea MBE for being the first rider to win three consecutive World Superbike Championships.
• 2016 MotoGP racer Cal Crutchlow for being first British rider to win a premier class World Championship Motorcycle Grand Prix in 35 years.
• 2015 Eleven-time TT winner Ian Hutchinson for his outstanding determination, courage and overcoming adversity to win multiple TTs.
• 2014 Shane ‘Shakey’ Byrne for becoming the first man in history to be crowned British Superbike Championship on four occasions (2003, 2008, 2012 and 2014).
• 2013 Tom Sykes for being crowned the 15th World Superbike Champion, the fourth from Great Britain and only the second rider to win for Kawasaki in the series for 20 years.
• 2008 World Superbike Champion James Toseland was awarded the Trophy for his immense contribution to raising the profile of motorcycle racing in this country.
• 1998 Ian Kerr of the Metropolitan Police for 20-years of tireless work in promoting safe and responsible motorcycling.
• 1989 BMW in recognition for their contribution to motorcycle safety through their development of their anti-lock braking system.
• 1981 Dave Taylor MBE for his vast contribution to motorcycle road safety.
• 1980 Transport and Road Laboratory.
• 1979 Lieutenant-Colonel Fredrick Lovegrove OBE.