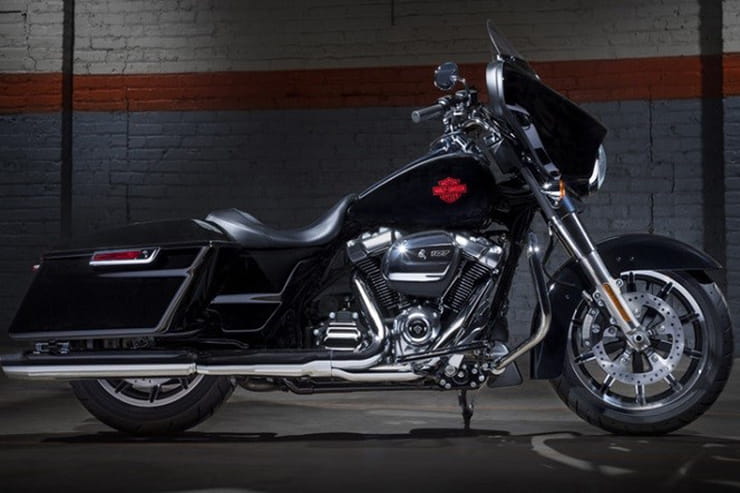 Harley-Davidson has taken the wraps off its new Electra Glide Standard – a full-on tourer that manages to slip just under the £20,000 mark by shaving off some of the fripperies normally associated with high-end H-Ds.

Coming in at £19,995 the Electra Glide Standard is still far from cheap but it’s more than £4000 less than you’ll pay for the firm’s Ultra Limited, which shares the same basic building blocks. The ‘batwing’ fairing is the same, but with a shorter screen, and there’s no pillion throne or top box.

What you do get is the firm’s latest ‘Milwaukee-Eight’ 1745cc V-twin engine, making 89hp at 5450rpm and an impressive 150Nm of torque at just 3250rpm, mounted in the latest iteration of Harley’s touring chassis with 49mm Showa forks, adjustable rear shocks and Brembo linked ABS brakes.

Harley-Davidson’s Vice President of Styling & Design Brad Richards said: “To express the stripped-back essence of the Electra Glide Standard we focused on finishes that were simple, timeless, and fundamental to the Harley-Davidson’s touring line. Chrome was added to key components and complimented by polished and blacked out parts. The rocker, cam, and derby covers are finished with chrome to emphasize the V-Twin shape of the Milwaukee-Eight 107 engine. In addition, they add a dose of nostalgia that draws a through-line all the way back to the first Electra Glide.”

Where other tourers make much of their impressive touchscreen interfaces and thumping stereos, Harley’s ever-sharp marketing department presents the Electra Glide Standard’s lack of such kit as a selling point. “Disconnect from screens and gadgets and enjoy the ride” they say, referring to the traditional all-analogue gauges, before extolling the virtues of the “glove box in place of an audio system.” You do still get keyless ignition and cruise control, though – it’s a £20k motorcycle.

Stripped back though the Electra Glide Standard is, weight saving wasn’t high on the agenda. The bike still strains garage floors under its 354kg mass. And if you want one, you’d better like black paint, as that’s the only colour on offer.