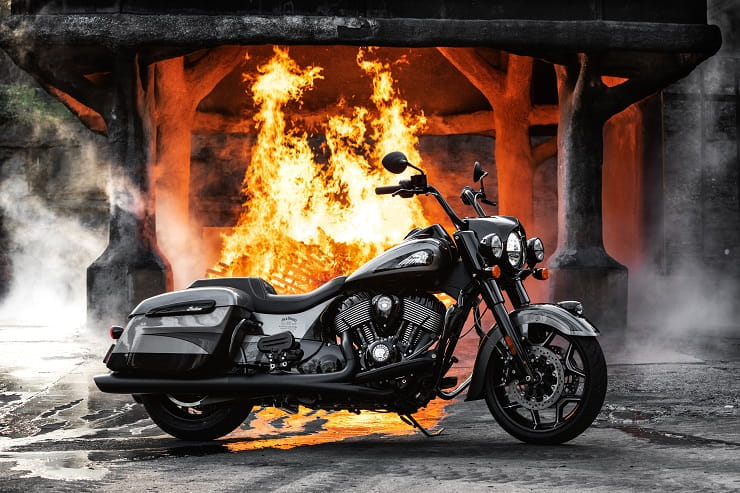 Indian’s tie-in with Jack Daniel’s has spawned yet another small-run machine in the form of this, the Jack Daniel’s Limited Edition Indian Springfield Dark Horse.

It’s the fourth such machine, coming on the heels of the 2016 Springfield Jack Daniel’s, the 2017 Chieftain Jack Daniel’s and the 2018 Scout Bobber Jack Daniel’s. As with its predecessors, it’s the result of a joint effort between Indian and Klock Werks Customs, and will be offered in small numbers – just 177 will be made.

Changes compared to the stock Dark Horse include the two-tone paint scheme and graphics, Jack Daniel’s badging and wood grain finish on the tank badges. It’s also the first factory Indian to come as standard with a 116cu in (1890cc) version of Indian’s Thunder Stroke V-twin, making a claimed 123lbft of torque. You also get 12 inch mid-rise ape-hangers, a tinted quick-release windscreen, custom wheels and full LED lighting.

“The team at Jack Daniel’s relies immensely on their passionate and specialized craftsmen to control the Single Barrel Select process from beginning to end, as each of them pour their personal pride and loyalty into the product every day,” said Reid Wilson, Senior Director for Indian Motorcycle. “Our team at Indian Motorcycle shares that same passion for craftsmanship and developed this motorcycle as a tribute to all the craftsmen who value working with their hands and are committed to developing products of the finest quality.”

Each bike also comes with a wooden Jack Daniel’s Single Barrel display to hold a JD bottle and two glasses, made from the same oak barrels used to mature the brand’s Single Barrel Select and branded with the bike’s limited-edition number and VIN.