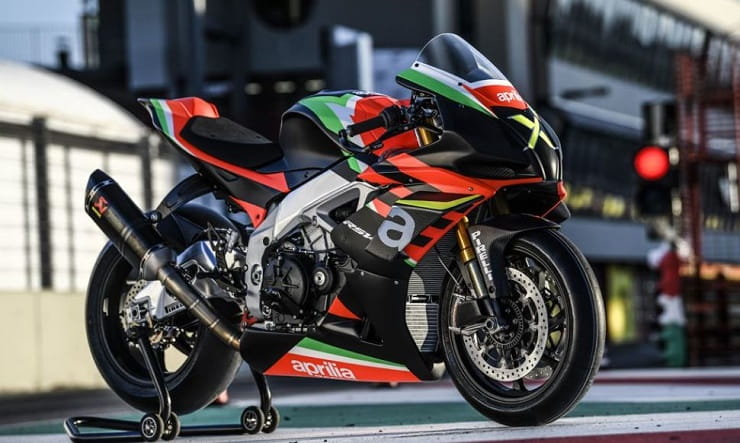 Aprilia’s RSV4 celebrates its 10th anniversary this year and to mark the moment the firm has unveiled a track-only special – the RSV4 X.

It’s by no means the first time Aprilia has made a track version of the RSV4, and neither is it the most expensive or most powerful – you’ll need the 250hp-plus RSV4 R-FW for that – but the RSV4 X is the first 1100cc model to get the track treatment.

Since it’s marking the 10th anniversary of Aprilia’s V4, and carries the Roman ‘X’ in its name, it’s no surprise to hear that just 10 of these machines will be made. Each is based on the 217hp RSV4 1100 Factory road bike, but power is upped to 225hp via old-fashioned blueprinting by Aprilia’s race department, which also adds new intake camshafts, valve springs and tappets, plus a free-flowing Akrapovic exhaust that would be frowned upon by road-going type-approval authorities.

More intriguing is the ‘ANN’ (Aprilia No Neutral) system, which bucks decades of motorcycling convention by putting neutral below 1st gear in the shift pattern. So instead of down for 1st and up for all the other ratios, every gear is selected by moving the lever upwards. The idea is that you won’t hit neutral by accident when shifting from 1st to 2nd, and Aprilia already uses the layout on its MotoGP and WSBK bikes. The firm claims it’s the first time such a system has been used on a production model, although former Yamaha FS1-E riders might beg to differ (that bike was ‘up’ for neutral and ‘down’ for all four of its ratios).

The RSV4 X is the first bike to get Brembo’s new machined-from-solid GP4-MS calipers, and thanks to details like a carbon fairing its weight is reduced from the road going RSV4 Factory’s 177kg to a mere 165kg dry.

All this will cost €39,900 (£34,233), and if you’ve got that much burning a hole in your pocket you’ll be able to place your order from the second half of April at factoryworks.aprilia.com.