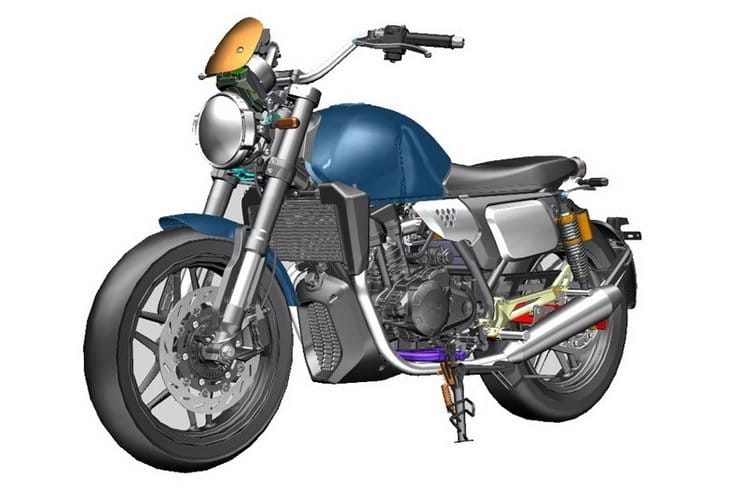 Zongshen – the Chinese firm that’s most recently come into the western limelight for its deal to licence-build a version of Norton’s new 650cc parallel twin engine – is also working on this intriguing 380cc twin-cylinder retro roadster.

Revealed in Chinese patent drawings, the new bike appears to use Zongshen’s own 380cc twin. The same engine is already in production and used in the firm’s RX3S adventure bike and RZ3S naked roadster. In those models it makes 36.7hp at 8500rpm and 24lbft of torque at 5500rpm, and there’s no reason to believe the figures would be any different on this new retro-style bike.

While the engine is carried over, the new model’s twin-shock chassis is new, and its styling is more clearly retro-inspired than the rest of the Zongshen range. There are hints to modernity in the upside-down forks, radial-mount brake caliper and cast alloy wheels, but the rest of the shapes owe much to flat-trackers of the past.

At the moment Zongshen isn’t a brand that’s likely to be on many western buyers’ radars, but the firm has a long history in China and was among the first companies from that country to show a real interest in making large, high-performance bikes. It developed prototype sports bikes as big as 750cc more than a decade ago, and while they didn’t reach production the deal to produce a version of Norton’s new 650cc twin, as used in the British firm’s Atlas and Superlight models, means it could soon be making a viable alternative to mainstream options like Suzuki’s SV650 and Yamaha’s MT-07. Zongshen is also understood to be at the forefront of the race to provide China’s government with a convincing electric police bike.

When we tested Zongshen’s single-cylinder RX3 in 2014 (confusingly similar in both title and appearance to the twin-cylinder RX3S), it was being sold in the UK under the Honley RX3 name, we were impressed by its quality and value for money. At the moment, it’s not clear whether Zongshen has serious intentions to make a splash on the international scene – after all, its home market in China is massive – but if it does, the firm appears to be cultivating an increasingly convincing model range.