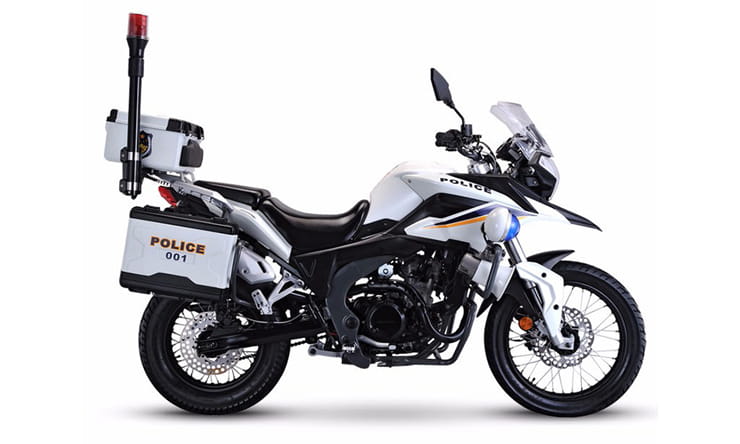 Earlier this year we revealed how huge Chinese government contracts are funding the development of a new generation of big-capacity, high-powered bikes from the country’s home-grown manufacturers.

But there was a second element to that story, too. As well as putting out a tender for a new high-performance, shaft-drive machine with at least 140hp, the Chinese government is looking for an electric bike to use for military and police purposes. In particular, it needs one for motorcades and city use, since petrol-powered motorcycles are increasingly being banned from metropolitan centres in China.

Now we’ve got our first glimpse of the leading candidate for that contract. It’s from Zongshen, which since the 1990s has been one of China’s leading motorcycle and engine makers. 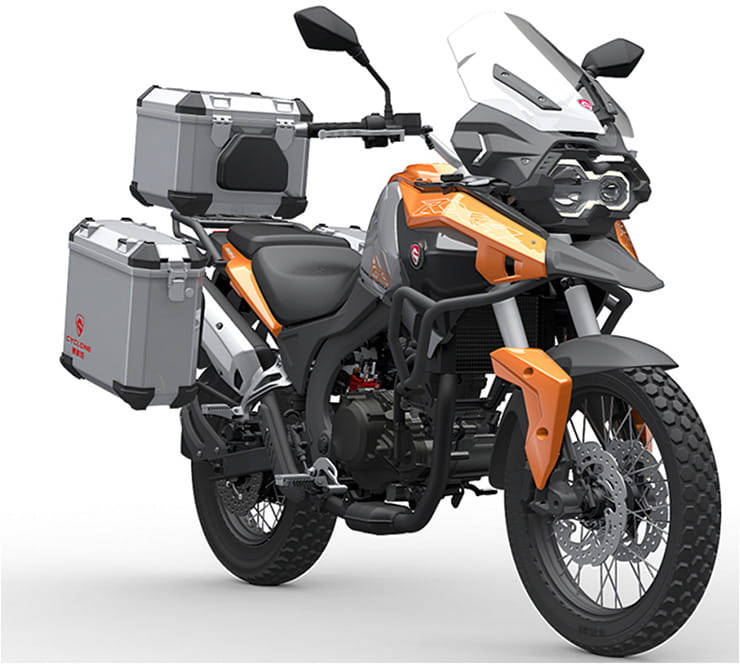 While you probably don’t have a local Zongshen dealer, it’s a company that’s increasingly familiar to western riders.

Most recently it’s been in the news for a multi-million pound deal to buy a licence to make a version of Norton’s upcoming 650cc parallel twin engine. That will become Zongshen’s biggest-capacity engine; at the moment the company’s line-up ranges from 50cc to 500cc and builds over 4 million bike engines per year as well as more than a million complete bikes.

Zongshen’s bikes have also hit the market over here before, but often under other names. Back in 2014 we were impressed by the Honley Venturer 250, which is a rebranded Zongshen RX3.

As well as that machine, Zongshen’s increasingly impressive range of mini adventure bikes now includes the 450cc single-cylinder RX4 and a 380cc parallel twin that’s confusingly named RX3S, despite having a completely different engine to the RX3. 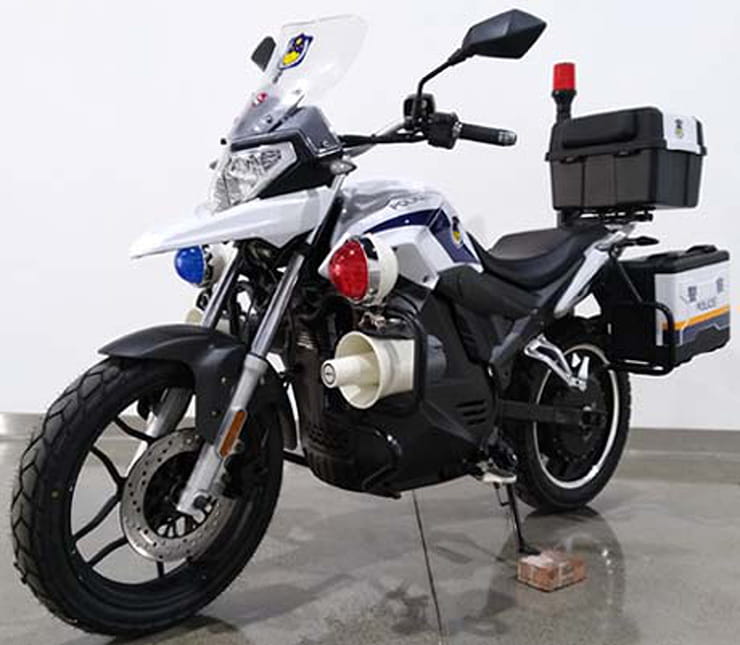 The new electric bike that you see in the leaked picture here is surely the proposal for the new Chinese government tender.

As images of Chinese motorcades prove, sheer number of bikes bought by the Chinese government can singlehandedly fund the development of entirely new models. In fact, many of the most impressive bikes seen from China so far have stemmed from government supply deals. CFMoto’s 650 parallel twin range, for instance, has long been the mainstay for the police and military there, and its good-looking and well-equipped CF650TK-G tourer is simply a civilian version of the current CF650G police bike.

According to specifications we’ve seen for the new Zongshen model, it features an 8kW electric motor from specialist supplier Taizhou Quanshun Electric Drive Technology, which goes under the brand ‘QS Motor’ and supplies dozens of types of electric motors for mopeds, bikes and cars.

While 8kW doesn’t sound like much – it’s equivalent to around 11hp – it’s worth bearing in mind that electric motors are usually rated for the amount of power they can produce continuously. For short periods, and depending very much on the batteries and electronics they’re connected to, most can put out peak power levels two to three times as high as their continuous rating. That means the bike here is likely to be roughly on a par with the 25hp, 250cc RX3 in terms of performance.

The RX3 itself is already used as a police bike in China, and has even been offered in other countries including America as a police-spec machine. 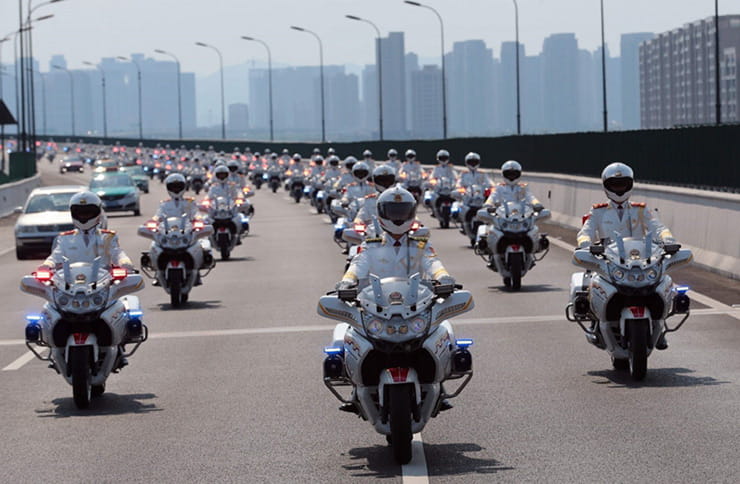 The new electric design shares a lot with the RX3 in its chassis and styling, too. The bodywork is largely the same as the single-cylinder mini adventure bike, although the upside down forks and wire wheels are swapped for conventional front suspension and alloys.

The wheel choice will be partly due to the fact that the electric motor appears to reside inside the back wheel’s hub rather than taking a more conventional position in the frame. That leaves more space for batteries, although a hub-mounted motor will inevitably harm the bike’s unspring weight.

If it’s using QS Motor’s top-of-the-range hub-mounted motor, which seems likely since it matches the Zongshen’s 8kW power rating, then it’s a hefty 22kg unit. Torque from that motor is rated at an almost unbelievable 350Nm (258lbft), although that shouldn’t be compared directly to torque figures from conventional petrol engines, which have torque-multiplying gear trains between their output shafts and the rear wheel.

While the instant torque of electric is good news for acceleration, they do tend to run out of steam when it comes to top speed. The specs we’ve seen put the Zongshen prototype’s top speed at 75mph.

That QS Motor powertrain can be coupled to a range of different battery packs ranging from 72V to 120V, and Zongshen’s choice of battery will inevitably make a huge impact on the bike’s performance, range and weight.

Speaking of weight, the overall ready-to-ride mass of the bike is reckoned to be 188kg, which sounds impressively light for an electric bike, particularly one in full police kit as seen here.

While the new Zongshen mightn’t be the most powerful, high-tech or fastest electric bike we’ve ever seen, it’s potentially got a couple of huge advantages over rivals.

One is the government supply deal. If Zongshen wins the contract to make thousands of these bikes for the Chinese military and police, then its research and development costs will effectively be recouped before a single civilian version is made.

Add that to the low cost of production in China, and the fact that unlike most of China’s fledgling electric bike makers, Zongshen already has well-established international market supply chains, and this could be a machine that’s both cheap and widely available.

And that’s perhaps exactly what the electric motorcycle market is crying out for. Just as Honda’s foundations were built not on high-end, high-performance bikes but the multi-million-selling Cub, which brought a new type of simple, easy motorcycling to a massive new market, a cheap electric bike that’s built to meet up to tough requirements of a government supply deal might be just what’s needed to tip battery-powered bikes from niche oddities to a mainstream option. And the Chinese taxpayer will foot the R&D bill. 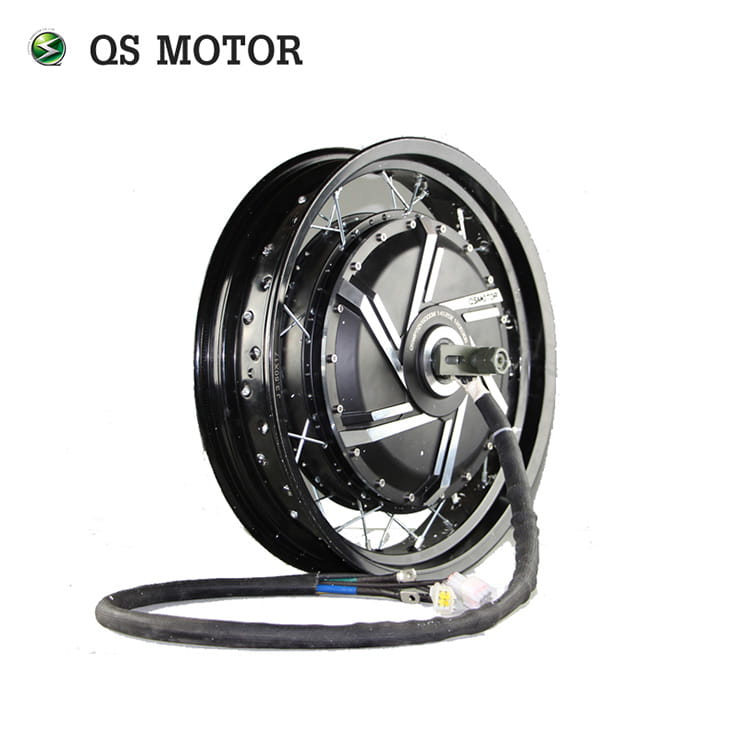