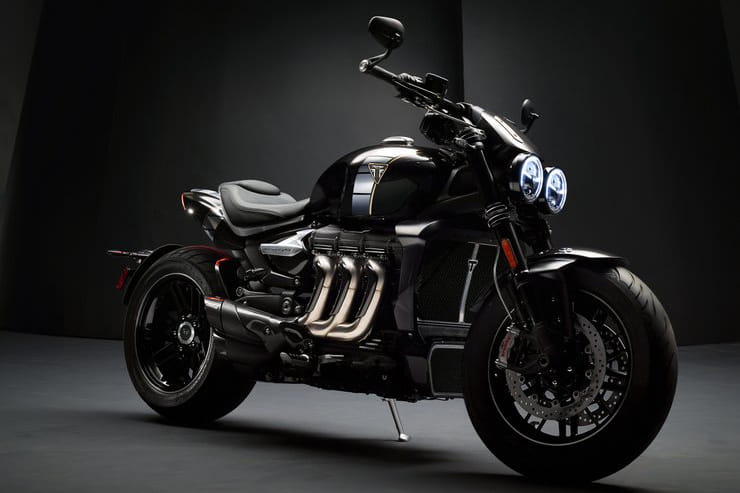 Triumph has already made promises that its new Rocket 3 TFC would be the most powerful production bike it’s ever made – and now it’s backing them up with some real numbers.

Cutting straight to the chase, the power figure is pegged at 182PS – that’s 180hp – coming in at 7000rpm. That’s a healthy 32hp more than the last of the old-generation Rocket IIIs, which made 148hp. Of course, the Rocket 3 TFC’s 2458cc triple is entirely new, sharing nothing more than its layout with the old 2294cc unit, and it’s clearly a much revvier motor. The old bike hit max power at 5750rpm and reached its 163lbft torque peak at a mere 2750rpm, while the new model needs 4000rpm to climb to its slightly higher 166lbft apogee.

The other key number is, of course, weight. While Triumph’s claimed figure of 290kg dry means it’s still a hefty lump, that’s a significant 44.5kg less than its predecessor, thanks largely to an all-alloy chassis. The lower weight combined with increased power means the Rocket is more of a performance bike than ever before, and its specs reflect that, with upside-down Showa forks, a single-sided swingarm and monoshock rear suspension, Brembo radial brake calipers and a vast array of electronics. You can read all about it here.

If all this makes you think the Rocket 3 TFC might be the bike for you, there’s just one problem – Triumph is only making 750 of them and the entire UK allocation is already sold out. But don’t despair as the firm is soon going to roll out a full-production version of the bike, and while it will lack some of the limited-edition TFC’s baubles the basic makeup will be much the same. It should also significantly undercut the £25,000 price tag that’s applied to the limited-edition model.