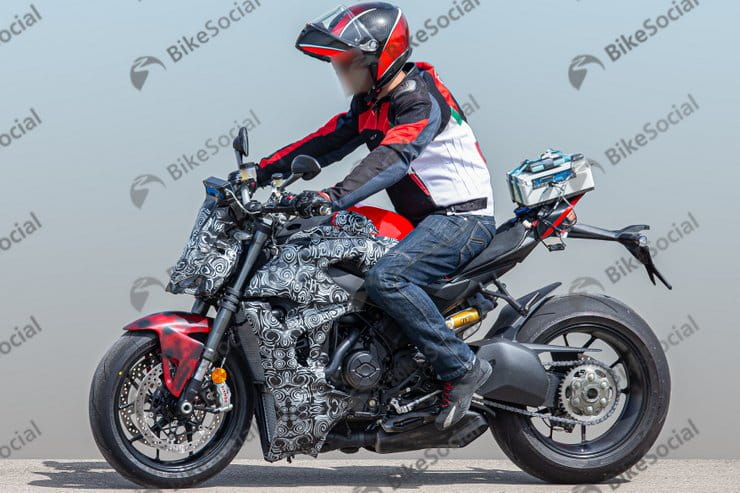 Ducati has already announced that a Panigale V4-based Streetfighter will join its range in 2020 but this is our clearest view yet of the production-spec machine.

The new 2020 machine was originally revealed in race form as part of a tragic effort to win the Pikes Peak International Hill Climb, giving the Streetfighter V4 a competition heritage before it was even launched. Multiple Pikes Peak winner Carlin Dunne crashed the prototype just yards from the finish line while on course for a record time, dying as a result of his injuries.

While the ill-fated Pikes Peak run gave a very clear look at a race-prepared version of the new Streetfighter V4, the production street bike will have significant differences, as revealed here.

As seen in the original race-spec prototype, all the main mechanical parts are ported straight from the Panigale V4, including the 1103cc V4 engine, the half-length chassis, single-sided swingarm and even the fuel tank and rear bodywork. Conversion into Streetfighter form is achieved by stripping off the front fairing and bolting on a set of tall, wide bars and new nose and side panels. 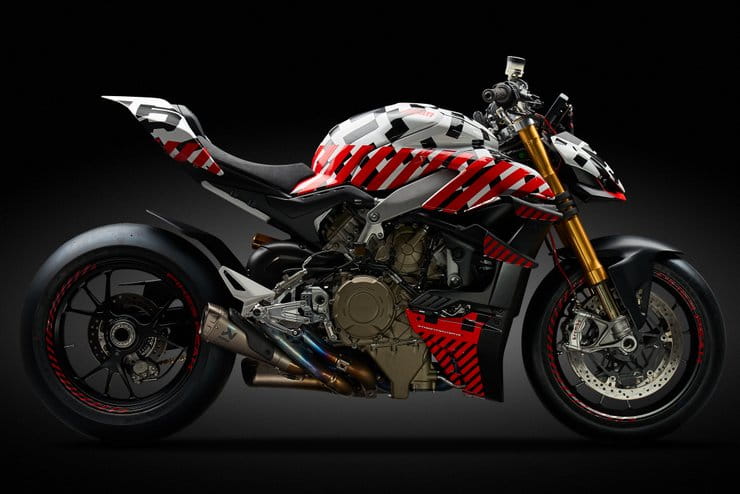 The new spy shots confirm that the Streetfighter V4 will be offered in two versions, mirroring the Panigale V4 range. The Pikes Peak racer was the higher-spec ‘S’ model, complete with Ohlins suspension front and rear, while the new pictures show a base version with the Showa BPF forks and Sachs rear shock from the cheapest Panigale V4. It also has the 10-spoke wheels of the lower-priced Panigale V4, where the S version uses forged wheels with a different design.

Another unsurprising change seen on the road-spec Streetfighter V4 is the adoption of the same exhaust system that’s used on the production Panigale rather than the race Akrapovic of the Pikes Peak bike. The use of an identical exhaust system suggests the V4 engine hasn’t been significantly retuned for the Streetfighter compared to the Panigale. That makes sense, since Ducati wants the bike to the most powerful naked model on the market. At the moment, MV Agusta’s 2019 Brutale 1000 wears that crown with 208hp, or 212hp with a race exhaust. The Panigale’s stock 214hp at 13,000rpm will give Ducati the lead that it wants, but there’s little margin to retune the engine for the Streetfighter V4.

We also see the road version using the same licence plate hanger and rear indicators as the Panigale, and that it has twin headlights fitted into the front fairing where the race bike used the holes as air intakes. 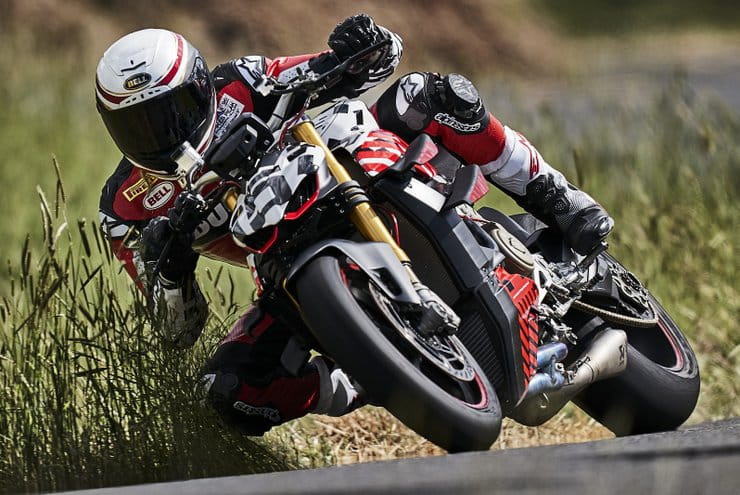 For an unfaired bike, the Streetfighter actually has a lot of body panels. The MotoGP-derived engine might be an engineering masterpiece but it’s not designed to be on show, so the Streetfighter covers it with bodywork. On the newly-spied, base-model Streetfighter V4 prototype, those side panels do without the dual winglets that featured on the Pikes Peak racer. Whether the higher-spec ‘S’ version features the wings remains to be seen; they might have been purely there for the competition model, but it’s hard to imagine Ducati won’t opt to use them at least one version of the production bike.

The bike is expected in dealers in around March next year after an official unveiling at the EICMA show this November. Prices? They’re unlikely to be far from those of the faired Panigale V4, with the base version starting at around the £19,000 mark and the S coming in at around £24,000.