Honda gets serious on active aero 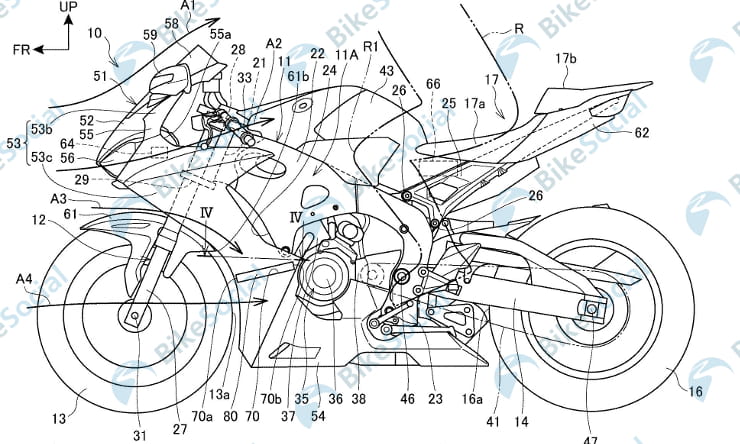 If there was any doubt remaining that active aerodynamics are about to become the subject of a new superbike development race it’s just been eliminated by a flurry of new patent applications from Honda that show the firm is working on multiple different systems.

Earlier this year, a patent document hinted that Honda was considering active aero for the new CBR1000RR-R Fireblade, and while the system isn’t fitted to the final production version it’s clear that future derivatives could use something similar. Now at least three more designs have emerged, all showing distinctly different routes to altering the aerodynamic performance of a superbike depending on whether it’s cornering or travelling in a straight line.

A recent clarification from the FIM has confirmed that moving bodywork is legal to use in WBSK on the proviso that an identical system is fitted to the road-going superbike that the racer is derived from. That means every manufacturer currently competing in the series will be scrambling to work out how it can exploit that possibility, and customers buying the street versions of the bikes will also reap the rewards of that R&D.

Honda’s original active aero patent (above), which we revealed back in September, revolved around bodywork design that looked very similar to the new 2020 Fireblade. But where the real production bike’s winglets are fixed, the patent showed a version with retractable versions – giving the option of ‘turning off’ the downforce when the bike was banked over, when the winglets could ‘push’ the front wheel outwards, or at very high speed when they induce drag.

The first (above) is the simplest and closest in concept to the design seen in September. Like that idea, it features retractable winglets on either side of the bodywork (in this case a fairing similar to the previous-generation Fireblade), but instead of placing them high on the sides, the winglets are low down and much larger than the earlier design.

The main objective of this design, as described in the patent, is to be able to reduce high-speed drag by withdrawing the wings, either using a speed-sensor to do it automatically or by giving the rider a manual control for the system. The manual system could, potentially, let racers pick and choose which sections of a circuit they use the wings on – perhaps if they find them useful for some corners and problematic in others. In racing, downforce can also have an impact on tyre temperature and wear, so the ability to manually modulate it could be useful.

Honda’s second new active aero patent (above), is rather stranger; instead of using winglets it features a moveable nose.

The engineers writing the patent explain that the slanted nose bodywork of a conventional superbike actually provides a noticeable amount of downforce, even if you don’t have winglets. By ‘breaking’ the bike’s nose they aim to disrupt the airflow over the front fairing, slashing the downforce.

Unlike the moveable winglets mention earlier, this isn’t an attempt to reduce drag but an attempt to help the bike in corners by eliminating the downforce that becomes an outward sideways force at extreme lean angles, pushing the front wheel off line.

Tilt sensors or the IMU will tell the nose to remain in its ‘normal’ position when the bike is upright, but as you lean a servo motor folds the nose downwards. The bluff front end that it causes disrupts the airflow over the bike’s front end and windscreen, reducing the amount of aero force trying to push the bike away from the apex of the corner. 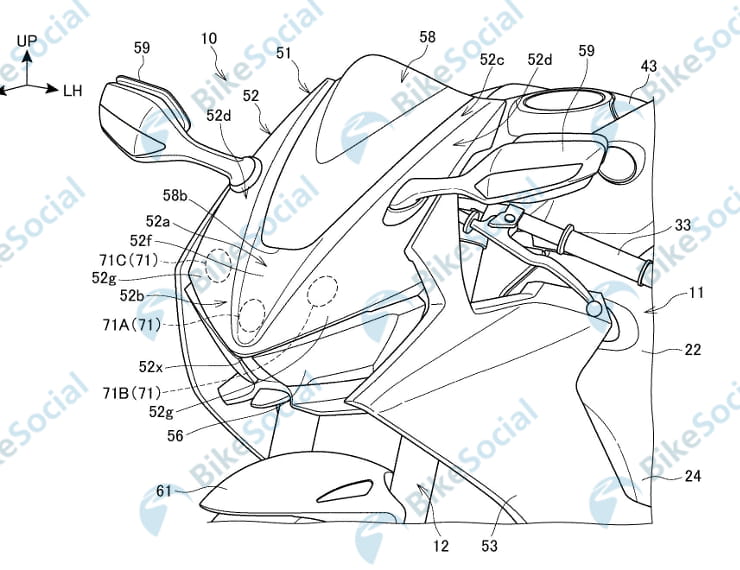 Honda’s third new active-aero patent application is possibly the simplest and cleverest, but it’s also the hardest to immediately understand.

As you can see in the image above, it doesn’t feature big sections of bodywork making distinct, easy-to-see movements. Instead it’s based on the idea of vibrating the body panels to disrupt the airflow when the firm wants the downforce to be reduced.

On the image, you can see three circular units on the bike’s nose. These are electric motors, each spinning an offset weight – much the same as motor that gives haptic feedback in a phone or the ‘rumble’ effect in a game console controller. The idea is that when it’s desirable to reduce the downforce created by the bike’s slanted nose, the motors can be spun up, causing imperceptible vibrations in the body panel that, while hard to see, nevertheless disrupt the laminar airflow over it. The result is a reduction in downforce.

Altering the speed at which the motors spin their offset weights changes the frequency of the vibration so it can be tuned to the best effect. Honda’s patent also suggests similar motors could be attached under the bike’s side panels. Activating them disrupts the airflow over the sides, increasing drag but reducing the bike’s aerodynamic stability at the same time. The idea there is that the vibrations will let the bike drop into corners faster.

While we can’t be sure that we’ll see any of these designs actually reaching a future production superbike, it’s eminently clear that Honda is exploring every possible option to take advantage of active aero for future use in WSBK. This is one area in which racing could truly improve the breed.