Triumph Street Triple getting updates for 2020 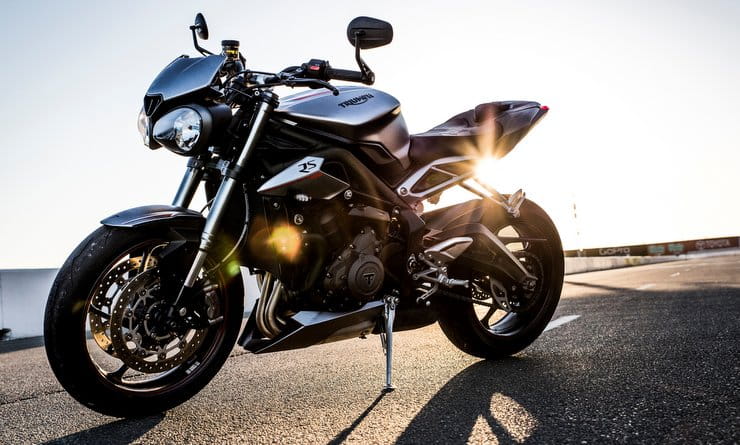 Triumph’s engineers have clearly been working overtime recently as the firm will be unveiling a revamped Street Triple 765 for 2020 along with the host of other new models that we’ve already got wind of.

To recap, we already know that Triumph’s 2020 range includes its all-new Rocket 3, which will be joined by a completely revised 888cc Tiger 900 to replace the Tiger 800. The Speed Triple 1050 is also being replaced by an upsized version, the forthcoming Speed Triple 1160, and the retro 1200cc Bonneville range is also set for updates including a new ‘TFC’ version of the Bonneville Bobber and a new Thruxton R ‘Black’ derivative. On top of that there’s also the ‘Moto2’ 765cc Daytona limited edition that’s getting its official unveiling at this weekend’s British MotoGP round.

Despite having their plates full with that lot, the firm’s development engineers have somehow found time to give the ever-popular Street Triple line a going-over, revising the styling and giving the bikes an updated, cleaner engine that meets Euro 5 emissions limits.

The changes are revealed by emissions documents filed on both sides of the Atlantic, creating a jigsaw of information that gives a pretty clear view of how the Street Triple is evolving. Paperwork filed with CARB (the California Air Research Board) shows that the 2020 Street Triple R and RS models will gain an additional three-way catalytic converter, giving a total of two instead of just one. As a result the hydrocarbon output is halved from 0.2g/km to 0.1g/km while the combined hydrocarbon and nitrogen oxides levels drop from 0.3g/km to 0.2g/km. The evaporative emissions are also lower; the 2019 model emitted 0.5g during the test, while the 2020 version drops to 0.3g.

That’s all very worthy, but European type approval documents give a bit more of a clue to the interesting stuff like performance. Interestingly, while the R and RS models have been type approved in America, at the moment only the RS version is mentioned on Triumph’s latest EU documents. That’s probably because it’s the most important model to get on sale first – in the UK Triumph sells around three times as many RS models as either the R or S versions.

The most powerful version in the current range, the RS (pictured above) makes 121.2bhp (90.4kW) at 11,750rpm. Next year’s Street Triple RS is type-approved at a near-identical 121.4bhp (90.5kW) at the same revs, which is impressive given the cleaner exhaust emissions. The bike’s dimensions are virtually unchanged but weight increases by 6kg from 181kg to 187kg in ready-to-ride form including a full tank of fuel. Triumph currently quotes old-fashioned ‘dry’ weights on its official spec sheets, with no fuel or oil, putting the existing Street Triple RS at 166kg. That’s likely to rise to 172kg if the firm sticks to the same measurement method for next year’s bike, with the additional catalytic converter surely responsible for the increase.

Although the US emissions information only covers the R and RS versions of the Street Triple, and the Euro documents only mention the RS model, Triumph is also believed to be retaining the cheaper ‘S’ version in the range. An ‘S’ version of the 2020 Street Triple has been spotted on the road; recognisable from its conventionally-mounted Nissin brake calipers rather the radial Brembos used by the R and RS. That spied bike revealed that the chassis and suspension isn’t getting changed but revealed sleeker-looking headlights that keep the slanted appearance of the current model but appear smaller and more back-swept, giving a cleaner overall look. The side panels by the radiator are also new, but otherwise the bike is largely the same as the old model.