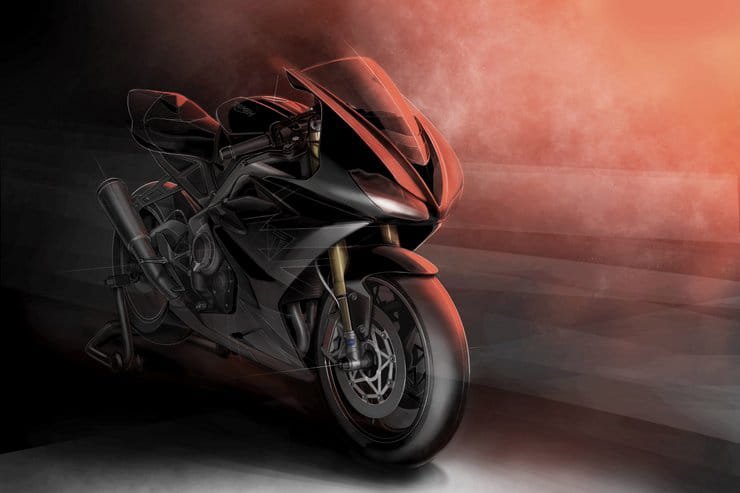 Triumph has confirmed that it’s bringing back the Daytona to celebrate its involvement with Moto2. To be launched at the British GP on 23rd August the new bike marks the first time the Daytona has been in the firm’s range since the old model was quietly killed in response to Euro 4 emissions rules.

The new model, going under the name Triumph Daytona Moto2™ 765, is clearly based on the last generation of Daytona, sold from 2013 to 2018, but adopts a version of the 765cc engine that powers both the existing Street Triple and – in much modified form – the current crop of Moto2 race bikes. Triumph isn’t talking specific numbers yet but says the bike will deliver “the highest ever Daytona power and torque.”

That’s a bold statement. In fact, it’s pretty much impossible, given that past bikes to carry the Daytona name include the 1992-98 Daytona 1200, with 147hp and 84.6lbft of torque and the 2005 Daytona 955i, also making 147hp and 74 lbs-ft.  While in Moto2 race form Triumph says the 765 triple makes more than 140PS (138hp), it’s unlikely that the road-going version will be quite that muscular. Meanwhile, the direct link between capacity and torque means the firm would be breaking the rules of physics to beat the old Daytona 1200’s maximum twist.

No, we suspect Triumph’s bombastic claim means the bike has more power and torque than any of the Daytona 675 models that it’s directly descended from, and more than the Street Triple spec road-going 765cc triples as well. At best, in 675R form, the previous Daytona made 126hp and 54.6 lbs-ft; numbers that the larger 765cc triple should easily be able to top. In street-legal, Euro 4-complient form the highest spec Street Triple RS version of the engine makes 121.2hp and 56.8lbft, so some judicious tuning – including the Moto2-style megaphone exhaust seen on Triumph’s teaser picture – should up that to somewhere in the region of 130hp.

In fact, there will be two versions of the new bike. One for Europe and Asia, the other for the USA and Canada, presumably each having tweaks to meet the legislation in those markets. Just 765 of each model will be made, for a worldwide total of 1530 bike.

Chassis-wise, Triumph’s pre-publicity confirms that the new Daytona’s frame is the same design as the old model, but it’s clear from the teaser drawing and earlier spy shots  that it’s getting equipped with a full quota of high-end Ohlins and Brembo kit to ensure top-notch handling and braking.

The teaser drawing released by Triumph appears to show the bike clad in carbon-fibre bodywork, promising a lower weight than the 167kg (dry) of the old 675R. Combine that exotic carbon with the trick suspension and brakes, not to mention the model’s limited-edition status, and the evidence mounts up that this won’t be a cheap alternative to bikes like the £9499 Kawasaki ZX6R or even the £11,799 Yamaha R6. Instead it’s more likely to rival the £16,000 MV Agusta F3 800, which also comes closest in terms of performance thanks to a 146hp triple.

In fact, we heard one dealer suggesting the price would be around the £15,000 mark.

All will be revealed on 23rd August, when Triumph says ‘two former motorcycle world champions’ will debut the bike on a dedicated parade lap at the British MotoGP round. Full specs, ordering details and prices should appear at the same time.

The big question that will then remain is this: does the Triumph Daytona Moto2™ 765 preview a full-scale revival of the Daytona model range, with higher production levels and lower prices? Or is it simply an ageing throwback coming up for a last breath before disappearing into a sea of adventure bikes and retro roadsters?

Five things we know about the new Daytona 765:

Five things we hope for:

And will it be eligible to race in a Bennetts British Superbike support class?

BSB Series Director, Stuart Higgs, told BikeSocial, "The GP2 regs are sufficiently liberal to potentially accommodate it. We would certainly evaluate it."