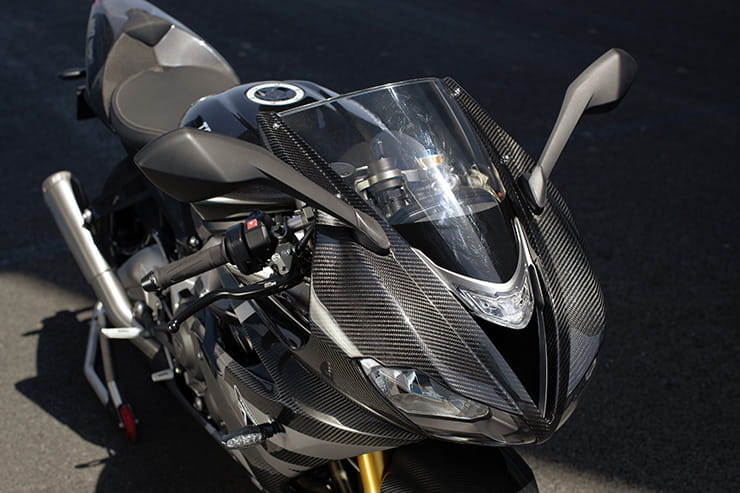 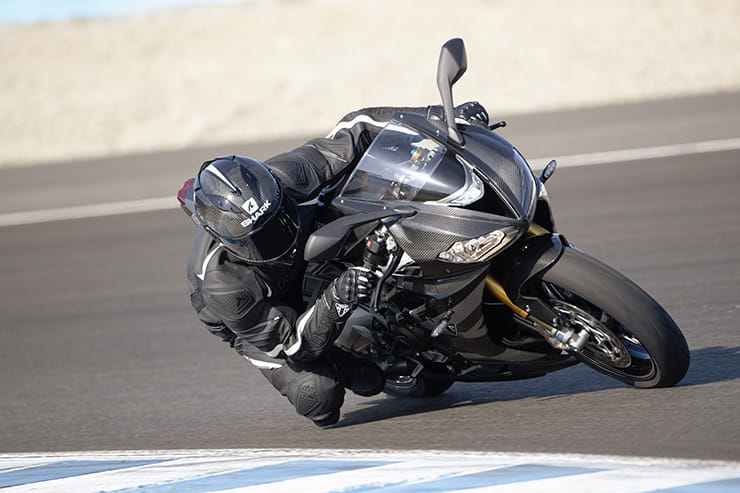 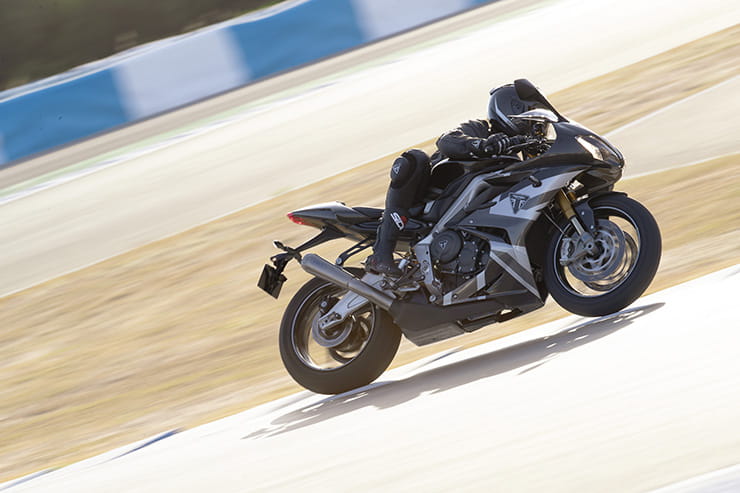 Triumph builds a sports bike after the accountants have gone home.

The word ‘ultimate’ is massively over-used, especially by marketing people with gravelly accents. Ultimate means ‘final’ and, in the case of Triumph’s new 765cc Moto2 replica it fits. The Moto2 Daytona is the first, last and very much the ‘Ultimate’ 765cc one they’ll build.

Which answered everyone’s first question, ‘Is this the limited-edition forerunner of a mass-produced 765cc Daytona?’ No, say Triumph. Absolutely not., and we didn’t see any fingers crossed behind their backs. Instead, this is Triumph waving-off one of their most successful and favourite machines with a full-on ‘blaze-of-glory’ demonstration of just how good a Daytona can be.

In the flesh it is stunning. The numbers on the spec sheet might struggle to compete with mass-produced 1000cc superbikes costing similar money, and let’s not forget that Honda’s now-legendary RC30 didn’t exactly impress us with the spec-sheet numbers either. But the attention to detail, quality components and lap times will certainly impress. The one-piece, hand-laid carbon fairing is finished to a standard most supercar builders can only dream of. The plain-anodised (not painted) frame and swing-arm are things of beauty and the top-spec Öhlins suspension and Brembo brakes mean that well-heeled buyers won’t need to trade up to a Ducati V4-R until they can get their TT lap times beyond the 128mph that Peter Hickman proved was capable on his 675 Daytona a couple of months back. 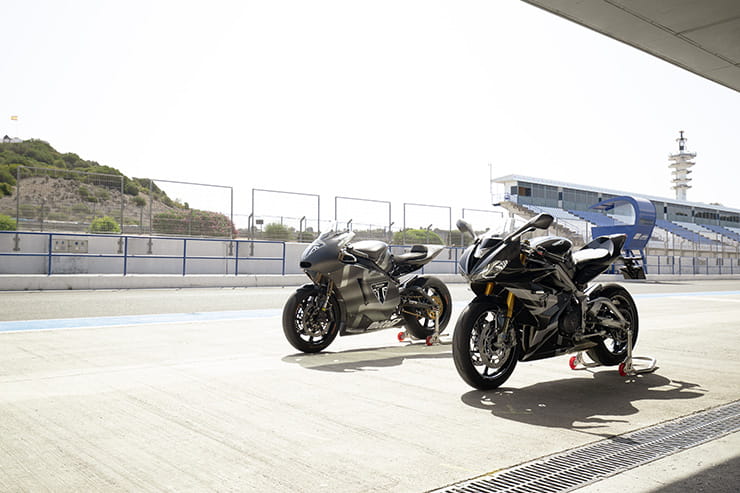 Just 10bhp down on the Moto2 racer, but fully Euro-4 compliant and a two-year, unlimited-mileage warranty as well

Triumph has tweaked the 765cc motor used in the Street Triple to get closer to Moto2 spec. It now makes 128bhp and 59lb-ft of torque, up from 121bhp and 56lb-ft in the Street Triple and down about 10bhp on the full-fat Moto2 racer. The changes are many, but mostly aimed at getting more rpm and so, more power, with reliability too. Titanium inlet valves, stronger pistons, revised cam profiles, new intake trumpets, modified crank and con-rods, intake ports and barrels, plus an increased compression ratio all combine to add 600rpm, 3lb-ft and 7bhp to the Street Triple’s engine.

That’s a lot of work to make just two more bhp than the outgoing 675cc Daytona, especially considering there’s ten per cent more capacity. But it’s not the headline number that matters here (unless your mate has a Suzuki GSX-R750, in which case you might want to focus on the chassis and suspension part of the spec-sheet).

What’s most impressive here is that the Daytona 765’s engine has a whopping 20 per cent more torque…everywhere than the old Daytona 675 unit (which was always considered torquey for a middleweight) and five per cent more than the 765 Street Triple RS’s motor too.

And what’s even more impressive is that, unlike your mate’s 148bhp/64lb-ft GSX-R750, this is a fully homologated, Euro-4 compliant motorcycle with an enormous catalytic convertor that the race bike doesn’t have and enough silencing (from a road-legal titanium Arrow end-can) to keep your neighbours happy. Without all that lot the road bike will be making not far off the numbers of the racer.

Still need more impressing? How about the fact that the limited-edition road bike is also built to be stronger and more reliable over time than the Moto2 racer? It has to be because customers still expect a proper warranty, 6000-mile service intervals and absolute dependability on the long ride home from their track day at Catalunya. So, many of the Daytona’s internals are stronger and heavier than the ones in the race bikes that do three race weekends (which is still impressively reliable) between rebuilds. 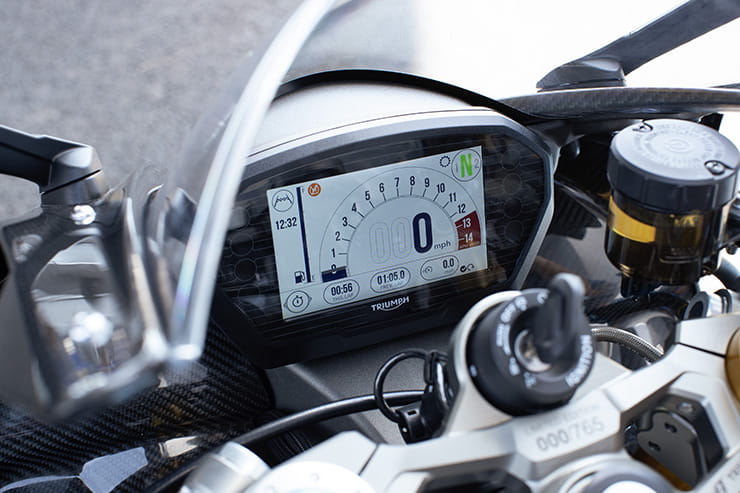 Five riding modes (including a rider-programmable one), traction control and ABS. The level of assistance (including ABS) varies with the setting selected. ABS is not lean-angle sensitive. There’s an up-and-down quick shifter fitted too.

Full TFT instrumentation with lap timer, easy selection and configuration of the riding modes, traction control and ABS settings, all controlled from Triumph’s joystick system and switchgear shared with the Street Triple. 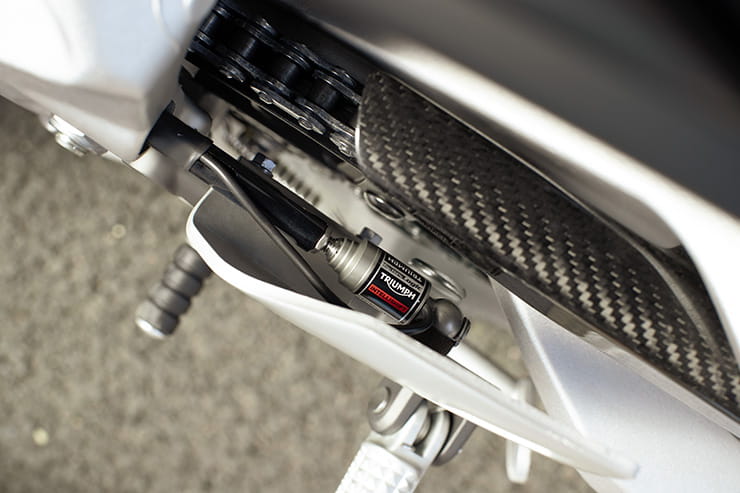 Up and down quick shifter fitted as standard

The alloy frame is basically the same as the outgoing Daytona 675R. The Daytona-R frame also has an adjustable swing-arm pivot. When Moto2 testing began Triumph built a test-mule using a standard Daytona chassis for their development riders to put some miles on the engine. They knew it was capable because the 675 has won at national races, World Supersport, the IoM TT and the Daytona 200, but were surprised, at the first official Moto2 test to discover this road bike chassis was lapping within 1.5 seconds of the full-on, ultra-stiff race bikes. The Daytona 765R is a single seater so the subframe is different and there’s no pillion pegs or rear seat. 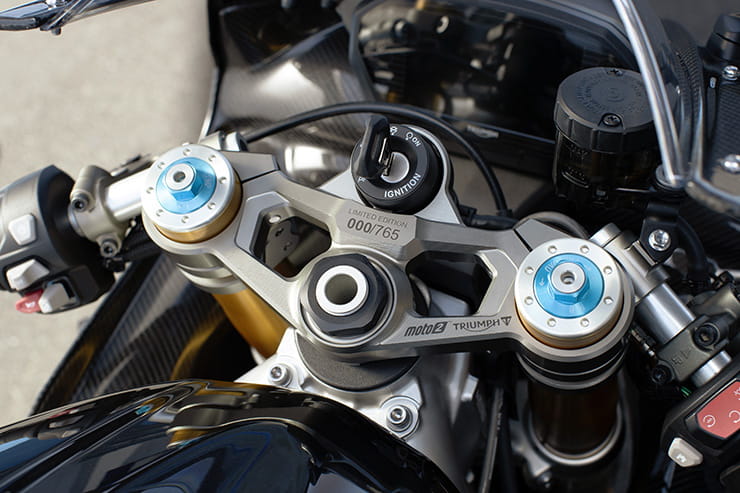 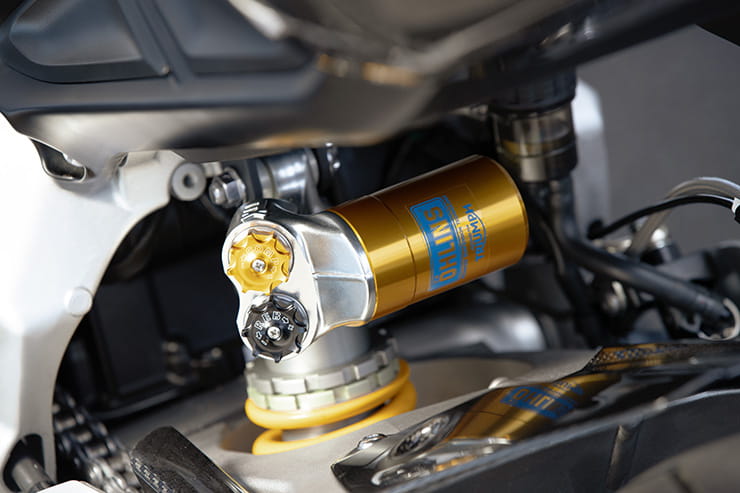 Top spec Öhlins suspension, but without the semi-active assistance of other top-of-the-range sportsters

High-spec, multi-adjustable Öhlins at both ends. The forks are NIX30 units and the shock is a TTX36 twin-tube monoshock. If that kind of things means anything to you, then chances are you are looking at the right bike.

Despite this being a top-spec, limited edition bike, Triumph opted not to use the semi-active versions with electronic control. This puts more responsibility on the rider knowing and understanding how suspension works and having the patience to work on a set-up. The flipside of that is that seriously sporty riders usually enjoy this or, at least, are happy to spend the money with an expert to help with a truly personalised set-up. Not everyone likes electronic assistance because your suspension performance can vary depending on what the sensors are detecting. 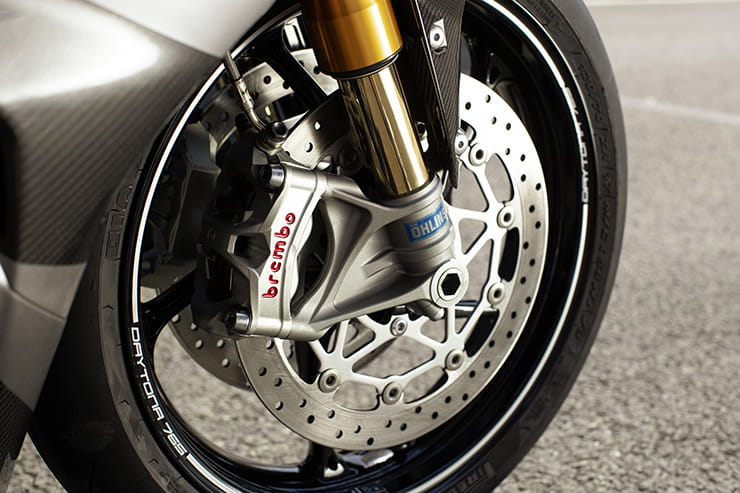 Top-spec Brembo Stylema (is it just me who wants to call them Brylcreem?) calipers, plus ASC master cylinder, plus ABS. Triumph say the reason they didn’t fit cornering ABS is that the feel and control of the chassis at all lean angles is so good that the added complexity of cornering ABS isn’t required. We are not sure they fully understand the benefits of cornering ABS to the road rider because no amount of Moto2 development brilliance will save you when the gravel and horse poo appears halfway round a blind corner on the B1192.

Wheels are cast alloy – the lightest Triumph has ever used, but still not as light as the carbon rims used on BMW’s M-spec S1000RR this year. 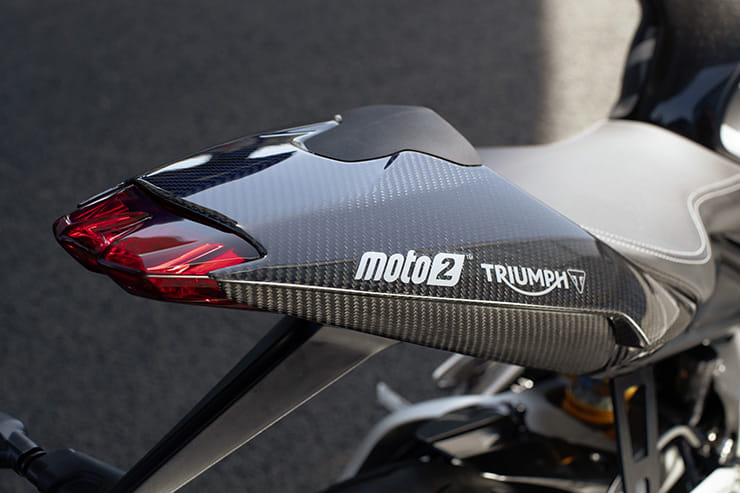 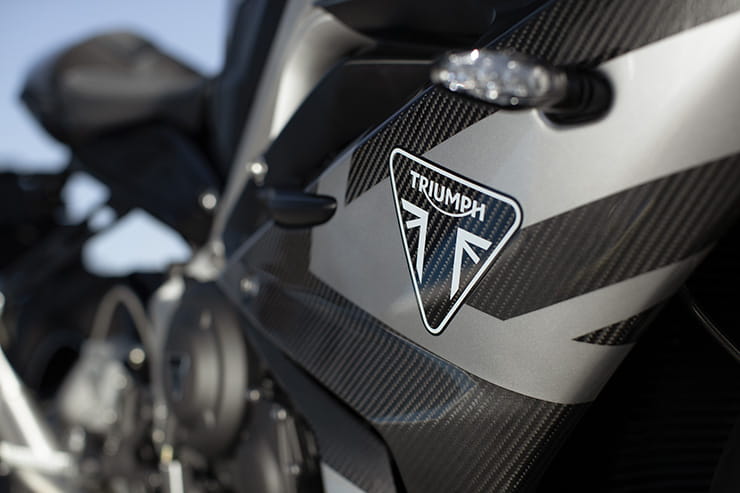 Quality of finish is just stunning

The styling is essentially that of the outgoing Daytona, but with single seat, no pillion pegs and full carbon bodywork. The fairing is now one piece and is hand-laid carbon, like the seat unit (which also has a custom seat). Finish is a special paint that leaves the carbon weave visible and the Union Jack motif is either in black and grey on the UK, Europe and Asian bikes or with an added red pinstripe on the USA and Canadian models.

It looks stunning in the flesh with the carbon panels set-off beautifully by the anodised metal frame and swing-arm.

If this is your idea of a perfect day out on a motorcycle, call your Triumph dealer now

Triumph are making just 1530 Moto2 Daytona 765Rs. 765 of those are coming to Europe and Asia and just 150 of those are available to UK buyers. Dealers have already ordered their allocations and Triumph expect most to be sold by the time production starts in Autumn 2019. suspension, brakes and electronics that’ll run rings around pretty much any other production bike on sale.

Not only that, but it’s one of those products that exist for a different reason than spec sheets or even actual performance can define. It’s genuinely special, built with passion by engineers who want to show the world what they can do when the gloves are off. The fact that it will only do 170mph instead of the 186mph of a full-on superbike is utterly irrelevant – the way it will make you feel through that one perfect corner on that one perfect track day in the tarmac-melting sunshine will make it seem like value at half the price…probably.