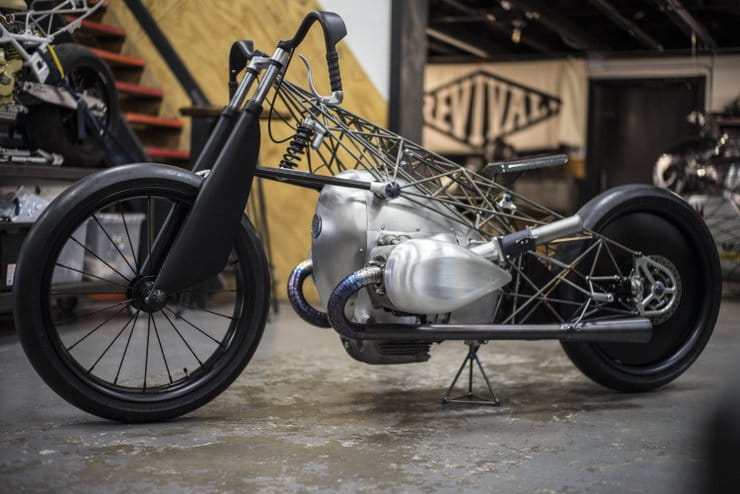 When BMW enters a new part of the bike market it’s worth sitting up and taking note. Over the last decade or so the firm’s hits have far outweighed its misses. Now it’s taking aim at perhaps the toughest, most tribal market of all as it prepares to compete with Harley-Davidson in the custom cruiser segment.

Back in 2004, BMW’s half-hearted R1200C fell out of the model range, seven years after its debut (marked by the bike’s unlikely appearance as James Bond’s ride in Tomorrow Never Dies). A decent machine in its own right, the R1200C used the firm’s existing boxer engine and was simply too small-capacity to ever appear on the radar of custom bike buyers used to massive 1500cc-plus machines. The firm’s then-boss, Herbert Diess, admitted as much in announcing the R1200C’s demise, but added that the firm might well be back in future with a more appropriate engine, saying: “This does not mean that we are turning away from the cruising philosophy with BMW motorcycles once and for all. On the contrary, it would be quite conceivable for us to re-interpret this theme quite differently some time or another.”

It’s been 15 years, but that time is nearly upon us, and after hinting at the new engine in December last year with the ‘Departed’ one-off from Custom Works Zon, BMW has revealed more with another externally-made custom machine: the ‘Revival Birdcage’.

Built around BMW’s forthcoming cruiser engine by US-based Revival Cycles, the Birdcage’s stunning thin-tube chassis gives it its name. Handmade from titanium, the frame is perfect for showing off the massive new boxer engine.

Alan Stulberg, head of Revival Cycles, said: “This was our first time to build a frame with titanium, that alone was already a significant challenge. Regardless, the frame came together very well in the end and we are very pleased with the result as it accomplished the goal of being nearly transparent. We wanted to focus attention on the engine and that is precisely what we achieved with this completely unique frame we designed. You can easily view the engine and the drivetrain from all angles.

“We had already dreamed about this bike for years and in December 2018 we received the engine and could finally get to work. I have always been a fan of the boxer engine, but the pure physical size and aesthetic appeal of this prototype really inspired us.”

The bike was unveiled at the Handbuilt Show in Austin, Texas, and BMW is making no pretence that it’s anything other than a preview of future production bike technology.

Timo Resch, Vice President Sales and Marketing BMW Motorrad, said: “The ‘Revival Birdcage’ turned out great and really showcases our Big Boxer perfectly. Following the ‘Departed’ from Custom Works Zon, this is the second fascinating custom bike built around the prototype of the BMW Motorrad Big Boxer. We will also be showing a BMW Motorrad developed concept bike featuring this engine in the first half-year of 2019. BMW Motorrad will present a series production motorcycle with the Big Boxer for the Cruiser segment in the course of 2020.”

The news of the upcoming concept bike, arriving in the first half of 2019, leaves little doubt that it will be BMW’s showpiece at the Concorso d’Eleganza Villa d’Este on 24-27 May. BMW has shown concept bikes at the event every year for more than half a decade, with many turning into production models. Most recently it showed the Concept 9Cento, which will become the new F850XR.

Details of the engine are still secret. The capacity is believed to be in the region of 1800cc and it remains traditionally air and oil cooled, bucking the trend that’s seen even Harley-Davidson move towards water-cooling in recent years. It’s also an old-school OHV design, with a block-mounted camshaft and pushrods operating the valves via rockers in the cylinder heads. However, don’t be surprised if there’s trickery inside, perhaps even including BMW’s latest pet project, the ShiftCam variable valve timing and lift system that’s debuted on the R1250 and S1000RR for 2019.

In Germany, a prototype of the actual BMW cruiser was recently spotted on the road. It’s a far cry from either of the concepts seen so far. Rather than being a stripped-back custom, it’s a full-dress cruiser, complete with massive fairing, although there’s no doubt that the range will eventually include a host of different style bikes, just like its main rivals at Harley-Davidson and Indian.

Can a BMW cruiser compete with the American firms that dominate the sector? The R1200C failed to do so, but given BMW’s recent record it’s hard to imagine it dropping the ball this time round.