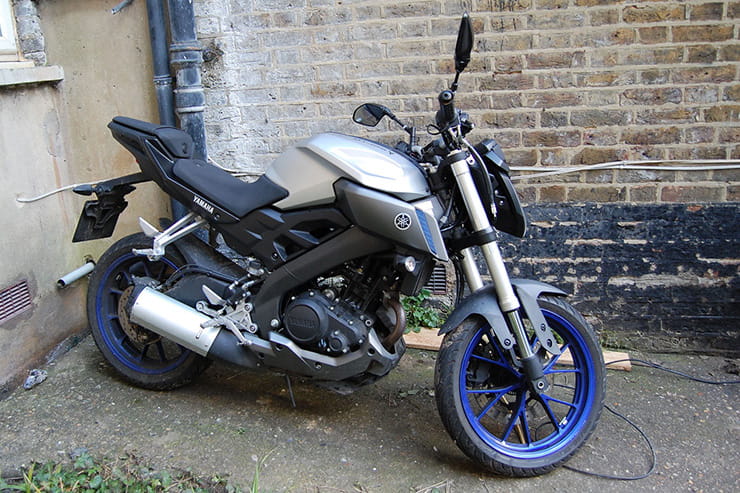 This stolen MT-125 led to a murder in London

Tyrone Farquharson of Archer Road, South Norwood, London, has been found guilty at the Old Bailey of murdering his ‘friend’, 20-year-old Kelva Smith, in what police called a ‘sudden and violent attack’ after a row over a stolen motorbike.

Smith had reportedly wanted to talk to Farquharson about his motorbike, which had been stolen from Croydon several weeks earlier while he was looking to sell it. After it went missing, Smith had been informed by his brother that Farquharson and a 14-year-old boy had been seen riding it around.

They arranged a meeting, but on the way Smith and his cousin were approached by 20-year-old Farquharson carrying a ‘Rambo’ knife, and a 16-year-old holding an axe. A 14-year-old was also implicated, but found not guilty.

The Crown Court jury heard that Farquharson stabbed Smith five times in total, before the victim collapsed nearby. Members of the public attempted to save him before police, paramedics and the London air ambulance arrived, but despite the best attempts of emergency services, he died on the street.

Police later found the motorbike – a Yamaha MT125 – behind a nearby block of flats.

Detective Sergeant Rob Tickle, from the Homicide and Major Crime Command, said: “This was not a gang-related crime, nor was it postcode-related; it was just a senseless and preventable one.

“Since the day of Smith’s murder, the accused individuals before the court have sought to frustrate the investigation and have treated the seriousness of the murder trial with utter contempt and disdain by shouting from the dock and laughing and joking between themselves, showing the grieving family as little dignity in death as they did in the final moments of his life.”
An investigation by the Metropolitan Police’s Homicide and Major Crime Command confirmed that Farquharson and the 16-year-old were in the area of Birchanger Road, Woodside Green on 5 March when Smith had been told they were riding around. 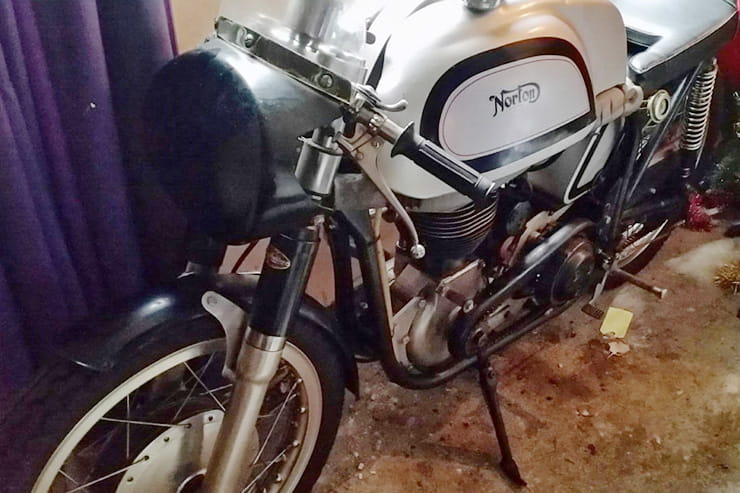 Cambridgeshire officers have released an image of a rare motorcycle stolen from a home in Gamlingay on October 17, between 11am and 12.15pm.

The stolen bike is a 1950s Manx-Norton with an ES2 engine worth more than £12,000 and designed specifically for racing. It is not registered with the DVLA.

This is a very distinctive motorbike that’s unlikely to be scrapped or sold in parts due to its high value. Anybody with any information at all should contact www.cambs.police.uk or crimestoppers-uk.org 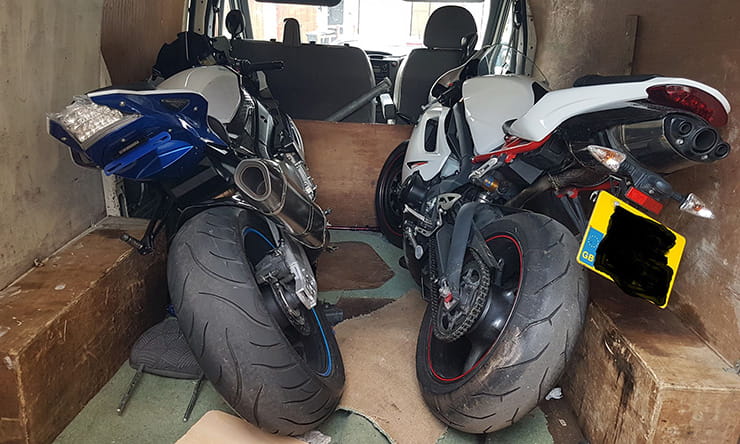 Two motorcycles – a BMW HP4 and a Triumph Daytona – were stolen from a dealer in Hemel Hempstead, Herts. Police were informed and the bikes were tracked to a van on false plates in Dunstable, Beds where the machines and van were recovered and arrests made. Great work by Herts and Beds police. 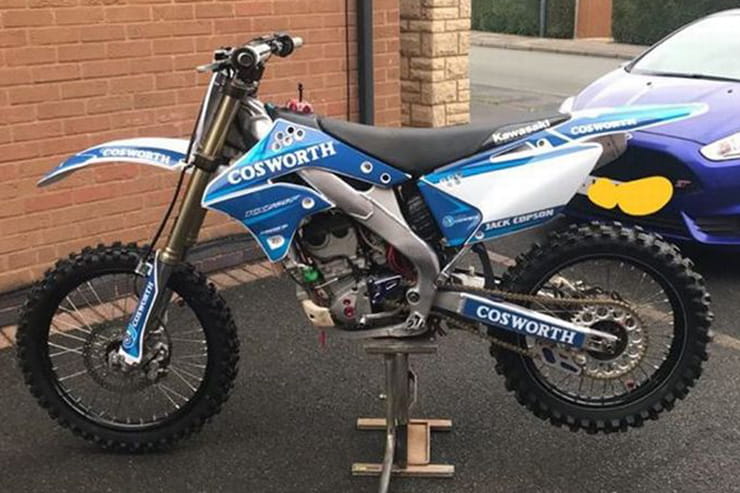 A recent Weston-Super-Mare beach race was spoiled for 20-year-old rider Jack Copson from Nuneaton when £14,000-worth of motocross bikes were stolen on October 19 from a locked vehicle parked at the Unity Camp site in Brean, where he was staying.

Anyone with information is asked to contact crimestoppers-uk.org or email james.brinsford@reachplc.com

Two suspects have been arrested after officers responded to an attempted robbery at a watch shop in Brent Cross Shopping Centre. Of the six suspects riding three motorcycles, Kyle Ettiene, 27, of Marble Drive, NW2, and Lookman Shekoni, 27, of Josephine Avenue, Lambeth SW22 were taken into custody, charged with attempted robbery.

An investigation led by Flying Squad officers continues, with enquiries ongoing in respect to the outstanding suspects. 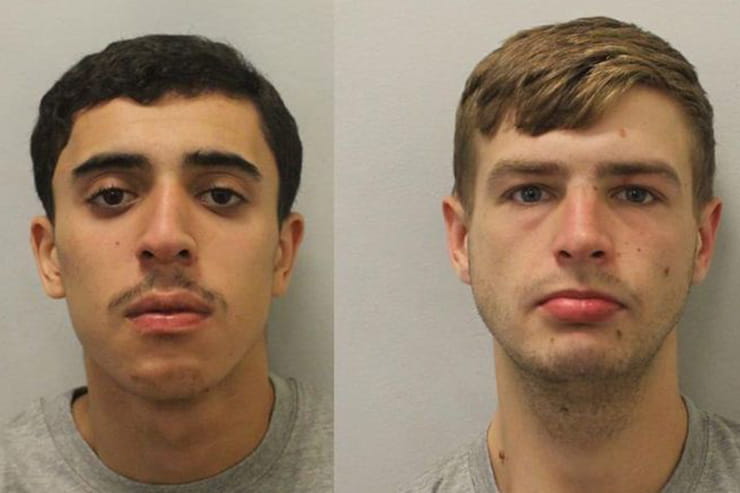 In a bid to evade the police, they led specialist traffic officers and a police helicopter on a dangerous chase for 90 minutes through South London, until they crashed into a bus in Coldharbour Lane in Brixton.

They were both arrested at the scene in possession of five stolen phones, and were later charged; Green of Elsted Street, Southwark with conspiracy to steal, aggravated vehicle taking and dangerous driving, failing to stop after the scene of a collision, failing to stop when required to do so by a police officer, driving not in accordance with a licence and driving without insurance.

Oliveira, of Curtis House, Morecambe Street, Southwark, was charged with conspiracy to steal and allowing to be carried on a stolen vehicle.

Both men pleaded guilty to all charges at Inner London Crown Court, with Green jailed for 28 months and Oliveira sentenced to 26 months in prison.

Detective Sergeant Mark Kelleher from the Operation Venice Investigation Team, said: “Criminals on mopeds think they have the upper hand because of their ability to make off from the scenes of their crimes and from police at speed, by weaving through traffic.

“In this case, a combination of good quality CCTV coverage, specialist officers, and the police helicopter meant that they had few avenues of escape.

“The Venice Investigation Team is committed to ensuring that those who commit moped-enabled crime face the consequences of their reckless and dangerous acts.”

Find out more about Operation Venice and the Met Police by watching the video of our exclusive interview here.

A new computer tool developed for police is claimed to detect false theft and robbery reports.

Computer scientists from Cardiff University and Charles III University in Madrid have developed software that can detect if somebody has reported a robbery or filed a fake police statement by recognising patterns that are more common with false claims, such as the types of items reported stolen and the details of incidents.

The tool has already been able to successfully identify false robbery reports with over 80% accuracy; it’s believed that it could save the police both time and effort by complementing traditional investigative techniques, while also deterring people from filing fake statements in the first place.

The ‘VeriPol’ system was trained on a database of police reports that had already been proven fraudulent. Using natural language processing (a form of artificial intelligence), automatic text analysis and advanced machine learning techniques, the program identified language patterns that frequently appeared in those reports, but not in legitimate ones.

It was found that the bogus reports tended to include shorter statements, focused more around what was stolen than on the incident itself. Also they lacked details regarding both the attacker and the incident, and they didn't include any mention of witnesses, or of victims contacting police immediately after the robbery occurred.

The system is now in use across Spain to support police officers and indicate where further investigations are necessary.