Suzuki’s Turbo Twin on the way as new patents filed 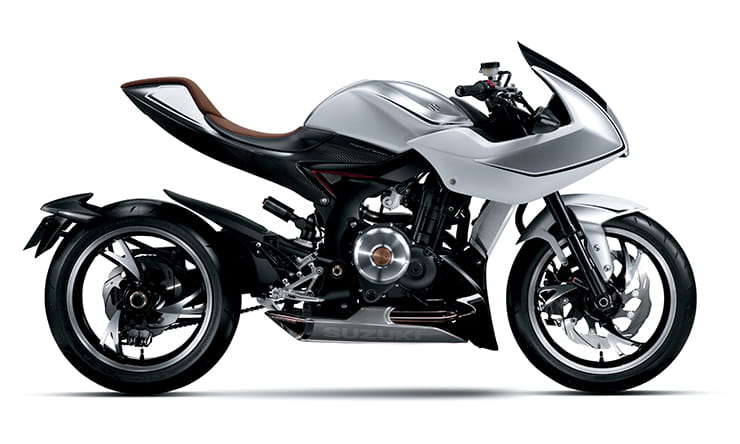 Ever since 2013 it’s been no secret that Suzuki is working towards a turbocharged middleweight sports bike and now the firm has filed a huge trove of new patents that give far more detail on what we can expect it to be like.

The first sign of Suzuki’s turbo plans was the Recusion concept bike, revealed at the 2013 Tokyo Motor Show. Featuring a single-overhead-cam, 588cc parallel twin with a turbo, it was claimed to be tuned for torque and economy rather than superbike-bashing power. A peak of 100bhp at 8000rpm wasn’t much more than you might expect from a normally-aspirated engine of that size, but the 74lb-ft of peak toque was well into the litre-bike arena. What’s more, it was claimed to come at a lowly 4500rpm, giving the Recursion a power band a mile wide.

Two years later, Suzuki revealed the next step in its turbo plan, once again using the biennial Toyko Motor Show as its platform. This time, there was just an engine, the XE7, and the firm was much more reticent to give away any specifications. Looking similar in size to the Recursion’s single-cam motor, the XE7 unit was completely new. Despite featuring double-overhead-cams, suggesting a higher-revving, higher-power design than the original single-cam motor, it was much more compact overall. The turbo’s intercooler – which reduces the temperature of the pressurised air being fed to the engine, making it denser and allowing the engine to make more power – was repositioned to a spot above the engine, alongside the pressurised plenum chamber. On the Recursion it was stretched out under the rider’s seat.

Notably, the new motor, complete with its turbo, intercooler and plenum chamber, fitted into the same size and shape of space that would be taken up by a normally-aspirated engine and its airbox.

Suzuki’s new patents reveal how the original Recusion design and the XE7 engine are to be combined into a single bike, and one that’s almost certainly destined for production.

While the patents show a machine with much the same outline as the Recursion concept, the chassis is completely new. The original concept’s aluminium frame is gone, replaced by a steel trellis design. 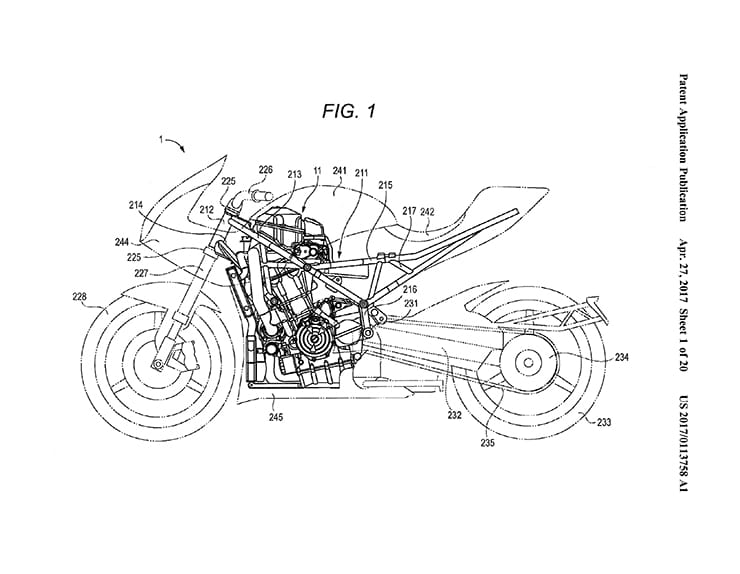 That makes a lot of sense, for reasons that have already been demonstrated on the cheerleader for forced induction, Kawasaki’s Ninja H2. The fact is that turbo and supercharged engines are inevitably festooned with more pipework than a normally-aspirated design. As well as pipes taking the pressurised air from the compressor to the intake plenum, there are additional cooling hoses to be catered for. A steel trellis allows this plumbing to weave through gaps between the chassis members far more easily than would be possible with an aluminium beam frame.

Clearly visible, slung inside this new chassis, lies the XE7 engine, looking exactly as it did when it was shown in Tokyo in 2015. Suzuki has never revealed specification for the engine, but like the original Recursion it’s understood to be around the 600cc mark. The DOHC layout hints that it’s designed with a bit more performance in mind than the SOHC Recursion engine. Something in the region of 130bhp would be within easy reach, giving the bike similar peak power to a four-cylinder 600cc supersports bike. Torque, however, will be far higher – like the Recursion, the engine can be expected to make more than 70lb-ft, and at relatively low revs.

With riders deserting the traditional 600cc supersports market over the last few years, the turbo twin, offering a similar outright performance level but a completely different experience, could be an interesting way to provide a new mid-level sports bike.

The patents, and there are some 16 of them, show a single-sided swingarm, like the Recursion, and the silhouette of the original Recursion’s fairing surrounds the new chassis. It’s far from certain that this is representative of the final styling, though. There has been speculation in Japan that the XE7 engine’s design and the way it will fit spaces designed with normally-aspirated motors in mind, suggest it will eventually be used in a whole range of bikes.

With the Tokyo Motor Show coming around again towards the end of this year, it’s likely to be the ideal platform for Suzuki to reveal the next step towards its turbocharged future. Watch this space.