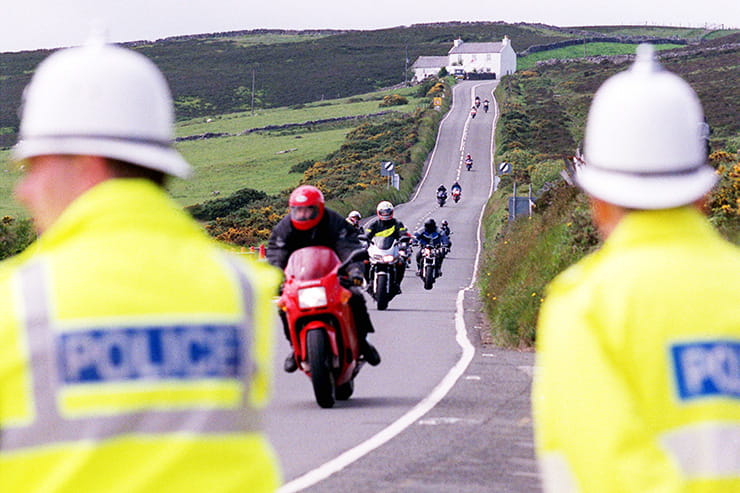 An expected 45,000 motorcycle racing enthusiasts will catch the ferry to the Isle of Man TT races in the next few days, and bikers can expect to see a lot of police activity in and around the ports of Liverpool and Heysham. Theft of bikes during practice and race week this year is expected to exceed the 23 machines reported stolen last year, from the local hotels and B&Bs alone.

The UK has clearly been suffering a motorcycle and scooter theft epidemic in the last two years, and while the police must be applauded for eliminating many organised motorcycle gangs over the last 12 months, others appear ready to immediately take their place.

The motorcycle theft figures half way through 2018 are still unfortunately expected to match – and even surpass – last year’s totals, which had reached 16,000 machines by June 2017.

Merseyside police officers are taking their responsibilities seriously by raising awareness of bike crime, warning riders that thieves are expected to be more active than usual during TT week and urging them to take strong security measures when leaving their machines and/or property overnight.

Sergeant Dave Yorke from Merseyside Matrix Roads Policing Unit – a member of the government’s MotorCycle Crime Reduction Group – pledged that his crime prevention operation was designed to reassure race-goers that police are deploying resources in the right places, to ensure that would-be thieves will be disrupted ahead of what he hoped would be a great TT event.

He added that his officers will be visible on the ground, ensuring that local businesses and hotels are keen to work alongside the police and that CCTV coverage is in place.

When riders arrive in the Isle of Man, the Manx police will also be advising them on crime prevention and checking for suspect machines when necessary. Clearly these officers know a lot about motorcycles, and they’ve previously seen machines, which have stolen from the mainland just prior to the event, abused on the Island before being abandoned either there or on the mainland.

Out of season, motorcycle theft on the Isle of Man can usually be counted on one hand. Even when the birch was last used in 1976 (actually not officially abandoned until 1993) the theft of motorcycles was not a major problem for the Manx police. As one Isle of Man officer suggested “there are other ways for our courts to deal just as strongly with motorcycle crime, other than six lashes of the birch.”

Today the total value of the TT to the Tynwald (Parliament of the Isle of Man) is £24.6 million; the 45,000 visitors will stay at least one week and spend an average of £757.

Did you know? Even back in 1946 – when the first post-war TT race was held, the Isle of Man received a massive 40,000 visitors. That race was won by Ernie Lyons on a 493cc Triumph, at a speed of 76.74mph (in terrible weather conditions).