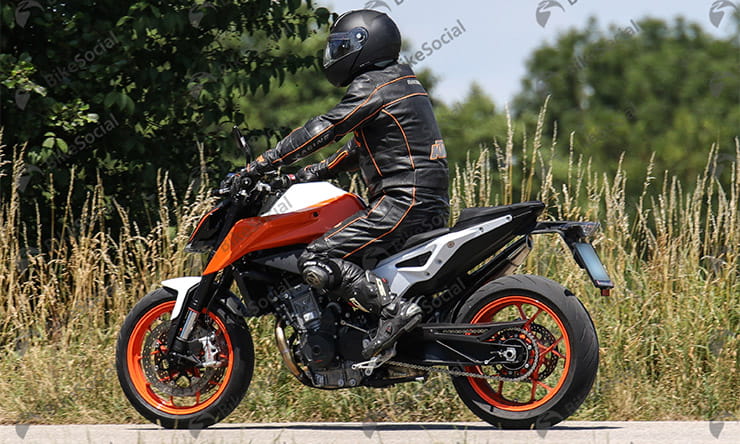 Did you know that while Triumph sells five distinct versions of its Street Triple 765 with prices starting at a bargain £8300, almost every buyer – certainly here in the UK – opts for the most expensive, £10,200 Street Triple RS model?

KTM knows that, which is no doubt why it’s hard at work preparing a higher-spec ‘R’ version of the already-impressive 790 Duke.

The existing 790 Duke, powered by KTM’s 799cc LC8c parallel twin engine, is a clear rival to the entry-level Street Triple S. Its close on power with 105hp compared to the Street Triple S’s 112hp, and near-identical in terms of weight at 169kg compared to 168kg for the British bike. Price-wise, the Austrian machine is fractionally more expensive at £8499, but more than makes up for it in offering a spectacular level of electronic gadgetry. Riding modes, ABS and traction control are expected these days, but the KTM also offers an up-and-down quickshift as standard, engine brake control, cornering ABS and stability control.

But with buyers in the segment clearly happy to spend more money to get an even better experience, KTM is working on a machine to offer exactly that. To be called the 790 Duke R it’s expected to get a boost in performance plus better handling and braking.

Spied in near-production form, the 790 Duke R clearly shares its style with the base model, but gains a typical KTM ‘R’ paint scheme with more white than the base model, plus orange wheels.

However, it’s more than just a cosmetic tweak, as there are technical changes to be seen as well. Most obvious are the new brakes, which are Brembos rather than the normal KTM-branded radial calipers. Those calipers grasp larger discs – probably 320mm rather than the stock 300mm – mounted on new, lighter carriers.

There are similar changes at the back, where again the brake disc is a larger diameter than the base model’s.

Those front calipers are fitted to new forks. As usual for KTM, they’re WPs, but unlike the ones on the base 790 Duke, the R’s are fully-adjustable for compression and rebound damping, with adjuster screws for both visible in the pictures. While we can’t see it, the rear shock is sure to get the same upgraded adjustability.

To go with the sportier suspension and brakes, the Duke R gains a more extreme riding position than the basic version. New rearset footpegs are clearly visible here, positioning the rider’s feet much higher and further back than on the normal model. To go with them there are new brake and gear levers, made of lightweight aluminium.

Saving weight is likely to be a focus for the R. We can see that it’s missing the pillion pegs of the stock bike – they are likely to be an option. KTM may save more weight by using forged rather than cast wheels, although it’s impossible to tell from the pictures.

It’s also impossible to see what’s been done to the engine, but given that the 790 Duke already gives away a few horses to the entry-level Street Triple S, KTM is likely to be searching for ways to shrink that gap. The best-selling Street Triple RS, which will be the 790 Duke R’s main rival, makes more power still –121.2hp – and weighs a few kg less than the KTM at 166kg.

Exactly what KTM has done to make sure the 790 Duke R can compete head-on with the Triumph will be revealed when the bike gets  unveiled towards the end of this year.