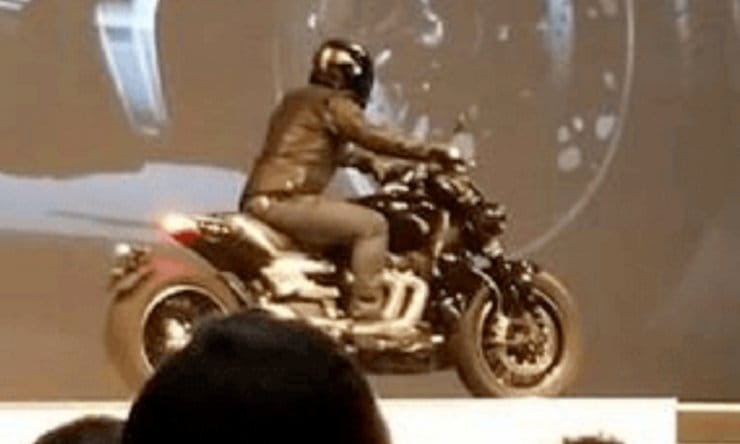 Triumph’s Rocket 3 disappeared from the firm’s European range earlier this year thanks to a lack of Euro4 emissions certification. But we hear that there’s a new version of the huge 2.3 litre three-cylinder cruiser in the works for 2019.

We’re told that the firm teased visitors to its international dealer conference back in October with the possibility of a new Rocket in 2019, showing an image of the old version when discussing potential future models. A design sketch of a possible redesign was also briefly flashed on the big screen while a bike that may have been a prototype for the new Rocket was ridden across the stage. It didn’t stop to allow pictures to be taken. Although dealers present weren’t given any concrete information, the impression was that the bike may be among the new models Triumph reveals during 2019.

Without any evidence as to the bike’s technical details, all we know is that the next Rocket is likely to use a revamped, Euro4-approved version of the 2294cc three-cylinder that’s been the largest production motorcycle engine in the world ever since the Rocket 3 first appeared some 15 years ago. Some time ago Triumph was rumoured to be working on an even bigger version – perhaps 2500cc or even 2600cc – for a future derivative of the bike, but whichever way the firm goes, any new Rocket 3 will surely be more powerful than the old 148hp version, and should have little trouble matching or beating the 159hp peak of the Ducati Diavel 1260. The torque figure is likely to surpass the previous generation’s 163lb-ft, too. That’s around twice as much as a 1000cc superbike can muster, and the existing Rocket summons it all up at a thudding 2750rpm.

For other details, we can only speculate based on the design drawing that was flashed at dealers back in October. That bike appeared to deviate from the traditional cruiser style of the Rocket, instead adopting a muscular stance reminiscent of the Ducati Diavel and bearing a notable similarity to Honda’s 2007 Evo 6 concept bike. Like those machines, it featured a single-sided swingarm and monoshock rear suspension, allied to fat USD forks with radial Brembo calipers at their base. Two stubby exhausts exit in front of the rear wheel, and the footpegs and bars are positioned for a ‘standard’ riding position rather than a laid-back cruiser stance.

Twin, round headlights – a nod to the previous Rocket 3 and to bikes like the Speed Triple – dominate the front styling, while the seat unit is relative high and short. Like the Diavel, the bike’s licence plate and rear indicators sat on a swingarm-mounted bracket, allowing the short seat unit while appeasing European rules requiring bodywork to extend beyond the back of the rear tyre.

While the huge engine will always be the main focal point of a Rocket 3, the switch to monoshock rear suspension instead of twin shocks is a hint that a new frame is coming. If Triumph can take the opportunity to shave a significant amount of weight from the Rocket – the old Rocket 3 Roadster was a massive 334kg dry – then it will be a significant boost for the bike. Given the sheer size of the three-cylinder engine and the use of shaft-drive, it’s never likely to be able to match machines like the Ducati Diavel 1260 on the weight front. The Ducati is 218kg dry, more than 100kg less than the old Rocket.

While the styling drawing’s styling and stance is a far cry from the bigger, heavier, more traditional-looking Rocket cruisers of the past, the existence of a redesigned, Euro4-approved version of the engine also opens the door for those more conventional models to be reprieved.

In terms of timing for the new bike, while there’s no official information, the dealer teaser hints that there might be something more concrete revealed before the next Triumph dealer conference in autumn 2019.