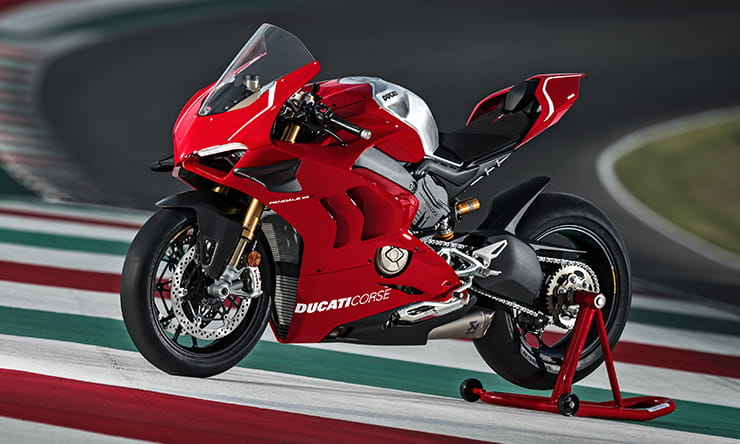 Ducati has unveiled its 2019 model range at a live-streamed event as a prelude to the EICMA show that opens this week – including the launch of the Panigale V4R that will spearhead the firm’s WSB effort.

Ducati has had to cut nearly 10% from the engine capacity of its Panigale V4 to slide under the 1000cc limit for WSB racing. But if you think that means losing power as well, you’re wrong – the new 998cc Panigale V4R is actually more powerful than the mainstream 1103cc Panigale V4.

With 217bhp, that’s 221PS or 162kW in metric terms, it’s not only the most powerful bike in Ducati’s range but the most powerful normally-aspirated, street-legal superbike on the market, regardless of engine size. It pips the new Aprilia RSV4 1100 Factory, revealed just days ago with 214bhp, and the 211bhp Panigale V4 that it’s based on, and while Kawasaki’s 228bhp H2 can beat it with the aid of a supercharger, that bike’s 238kg kerb weight means it’s way behind in power-to-weight terms.

Speaking of weight, the Panigale V4R is even more of a waif than its siblings, tipping the scales at a mere 193kg ready-to-ride. Dry, it’s just 172kg. That’s 5kg lighter than a base Panigale V4, and 2kg less than the S or Speciale versions.

The key to the bike’s power is its ability to rev. It loses 105cc compared to the Panigale V4’s 1103cc engine thanks to a 5.1mm shorter, 48.4mm stroke while retaining the same 81mm bore, making its internal dimensions identical to those of the MotoGP Desmosedici racer. The shorter stroke helps increase peak power revs from 13,000rpm for the 1103cc machine to a soaring 15,250rpm for the 998cc V4R. The red line doesn’t appear until an astounding 16,500rpm; higher than a 600cc bike, let alone rival 1000cc machines.

Peak torque, however, is down – 83lb-ft compared to 91.5lb-ft – and comes in at 11,500rpm rather than 10,000rpm. That’s the inevitable downside to a smaller engine, and hints at the different, revvier character of the V4R, as does Ducati’s decision to add a tooth to the rear sprocket and remove one from the front, giving more rev-happy overall gearing that should offset the diminished peak torque.

Despite its racier, revvier nature, the new engine retains the same impressively long service intervals as the normal Panigale, managing 7,500 miles (12,000km) or 12 months between visits to the dealer.

Chassis-wise, Ducati say it’s ‘optimised’ the rigidity of the aluminium frame on the V4R, but the geometry remains all but identical to the normal Panigale. No bad thing, given that bike’s glorious manners. The 24.5 degree head angle and 100mm of trail are the same, while the V4R’s wheelbase is a marginal 2mm longer than the normal bike, although an adjustable swingarm pivot means there’s more scope than normal to tailor the geometry to your liking.

Of course, if you’ve splashed out on the top-of-the-range Panigale V4R, you want everyone to know it, and the bike’s unique styling ensures that. As well as the shark-gill cooling vents on the fairing, which we had already seen when Ducati showed off the prototype V4R at Brands Hatch a few weeks ago, the production machine features MotoGP-inspired carbon-fibre winglets on either side of the nose. The winglets are claimed to add 30kg of front downforce at 170mph, 42% more than you’d have without them. That adds stability and improves braking performance at speed, while the winglets also help prevent unwanted wheelies. The winglets themselves are like those on the 2016-style MotoGP bike, before FIM rules placed restrictions on their design. That means the V4R’s wings are actually more effective than the ones on the latest MotoGP bikes…

The V4R is further distinguished from its siblings with a bare aluminium fuel tank finish.

Of course, anyone buying the raciest of all Ducati production bikes is probably going to dip into the options list, too. Do that with the Panigale V4R and you’ll be able to add a race exhaust, mirror blanking plates and a licence plate delete. Remove the road-going addenda, and the bike’s weight drops a further 7kg to 165kg dry (186kg wet), while the exhaust hikes power even further to231bhp (234PS, 172kW).

If you prefer the lower-revving, torquey character of the 1103cc Panigale but want to get race track oriented styling, there’s also a new Panigale V4 S Corse model in 2019. Spec-wise, it’s a stock V4 S, but it features a race-rep paint scheme inspired by the firm’s MotoGP machines. 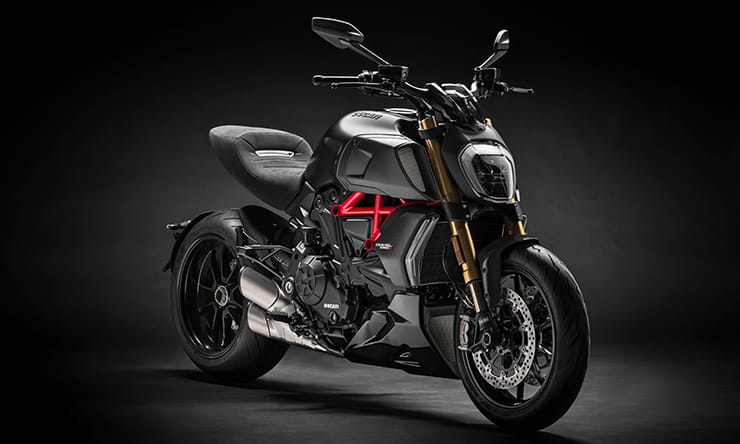 We’ve known for months that a Diavel 1260 was on the way for 2019, and any Ducatisti that visited the firm’s World Ducati Week earlier this year had the chance to see the bike in the metal in a closed-room preview. Now the rest of us get to see it, too.

As its name suggests, the 2019 bike gets the 1262cc, variable-valve timing version of the Testastretta V-twin engine that’s already used by the more cruiser-style XDiavel, although the Diavel, with its sportier riding position and more muscle-bike stance, also gets a few more horses. The 2019 bike peaks at 157bhp (159PS, 117kW) at 9,500rpm, up from the 150bhp maximum reached by both the old 1198cc Diavel and the current 1262cc XDiavel. It’s also got a fraction more torque; 95lb-ft, rather than 91lb-ft for its predecessor or 93lb-ft from the XDiavel.

The engine is mounted in trellis frame that’s again more like the XDiavel’s than the old Diavel’s. In fact it looks near-identical, but the new Diavel 1260’s relatively rear-mounted footrests give it a completely different riding position.

Perhaps it’s the bigger engine, or the XDiavel-derived chassis, but the new Diavel is a fraction heavier than its forebear, coming in at 244kg ready-to-ride, 5kg more than before but still 3kg less than the XDiavel.

As usual, there are two specs – a base model Diavel 1260 and a more well-equipped Diavel 1260S. The S version gets 48mm Ohlins forks, compared to the unnamed 50mm forks (probably Marzocchi) used on the base version. The S also gets an Ohlins shock, while again Ducati’s official specs don’t mention the brand of the base bike’s rear suspension, although Sachs is a likely supplier.

Both bikes get cornering ABS – an improvement over the ‘dumb’ ABS of the old Diavel – and Brembo calipers, although the S version uses M50 monoblocs compared to the M4.32s of the cheaper machine. Cornering traction control is also standard, along with wheelie control, cruise control and a 3.5in TFT dashboard display. The S model also features an up/down quickshifter (optional on the base bike), launch control and Ducati’s multimedia system. 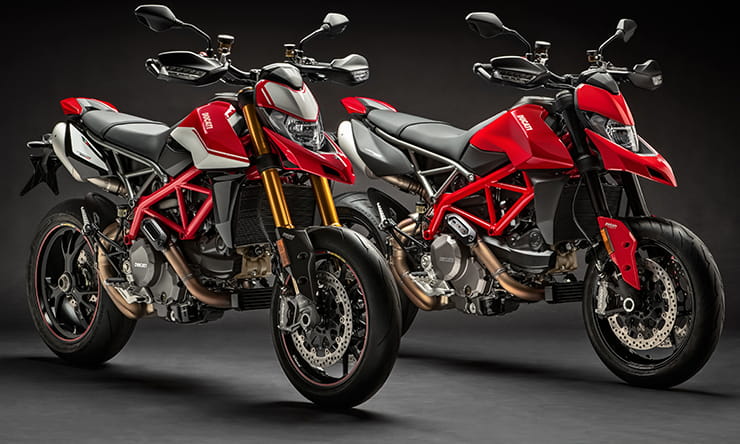 The name change from 2018’s Hypermotard 939 to 2019’s Hypermotard 950 might suggest a bigger engine than before. But in reality that’s one thing that the bike doesn’t get.

Chassis-wise, the clearest change is the swap to a steel trellis rear subframe from the old bike’s cast aluminium part. That helps make space for the new bike’s under-seat exhausts – a throwback to the style of the original, air-cooled Hypermotard that went on sale in 2007 – and also contributes to a 4kg weight reduction from 204kg to 200kg for the base model, while the SP version drops 3kg from 201kg to 198kg.

The base model has 45mm Marzocchi forks and a Sachs rear shock, while the SP version uses Ohlins front and rear combined with 20mm more ground clearance and forged wheels, which account for its lower weight. Both bikes get typical Ducati electronics including cornering ABS, traction contro, wheelie control and multiple power modes. The SP also features an up/down quick shift, optional on the base bike, and a smattering of carbon fibre body parts. 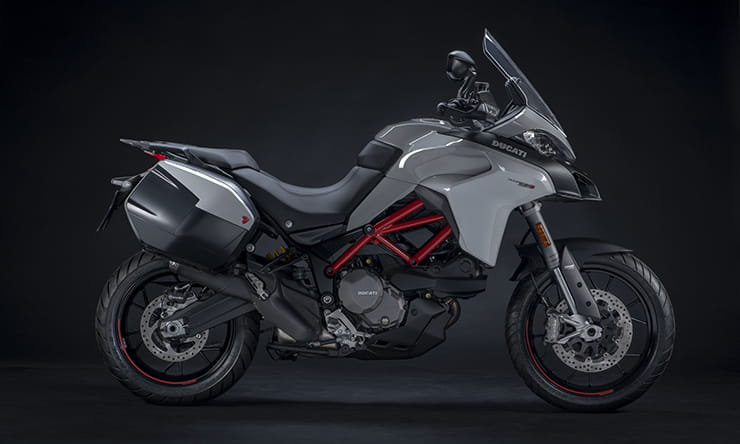 On the face of it, Ducati’s Multistrada 950 hasn’t changed much for 2019, other than some tweaks to the bodywork to bring it into line with the bigger Multistrada 1260. But there’s a key addition to the range in the form of the Multistrada 950 S.

There was never an ‘S’ model of the smaller Multistrada before, and the new machine adds much of the equipment of the larger Multistrada 1260 to the 950.

Even the base Multistrada 950 gets tweaks, including the addition of cornering ABS – something that’s fast spreading across the Ducati range – and hill start assist. But on top of that, the new S model gain Ducati’s electronic ‘Skyhook’ semi-active suspension, a TFT colour dashboard instead of the base model’s black-and-white LCD display, an up/down quick shifter, cruise control and LED headlights.

As before, there’s also a version with spoked wheels – the closest Ducati comes to offering a 950 version of the Multistrada Enduro – but for 2019 the spoked wheel model is based on the high-spec Multistrada 950 S rather than the base model.

Have your eye on a new Ducati in 2019? Here's when they're expected to land in UK dealerships and how much they'll set you back.