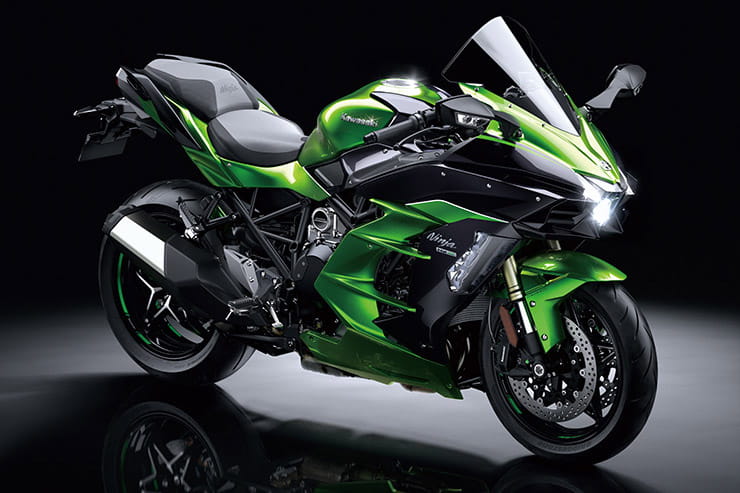 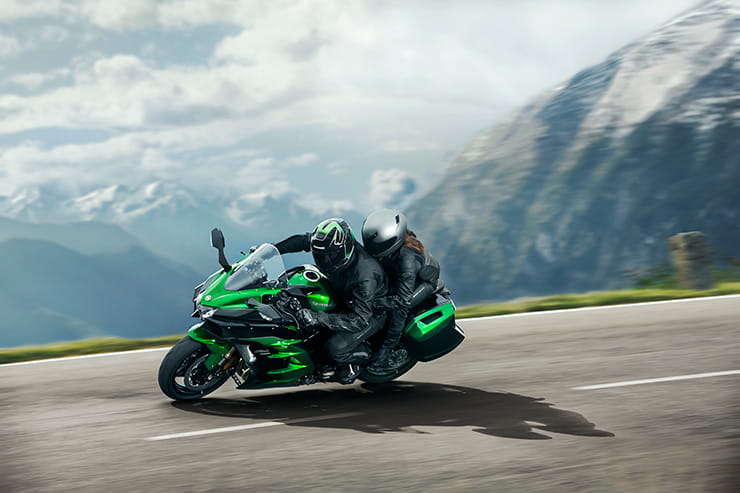 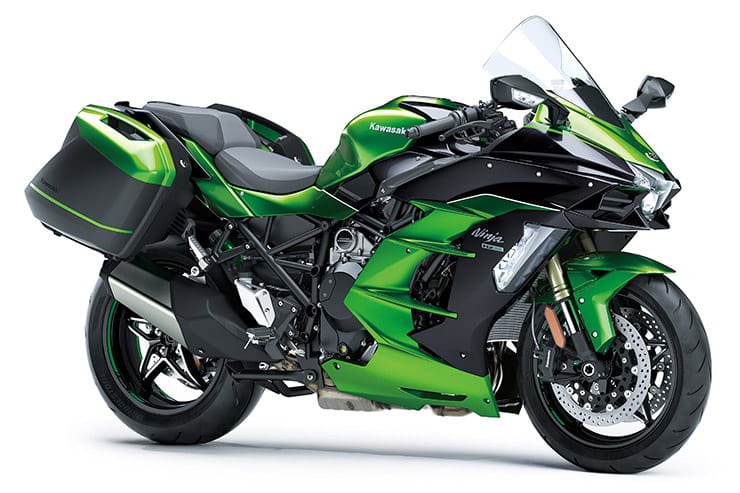 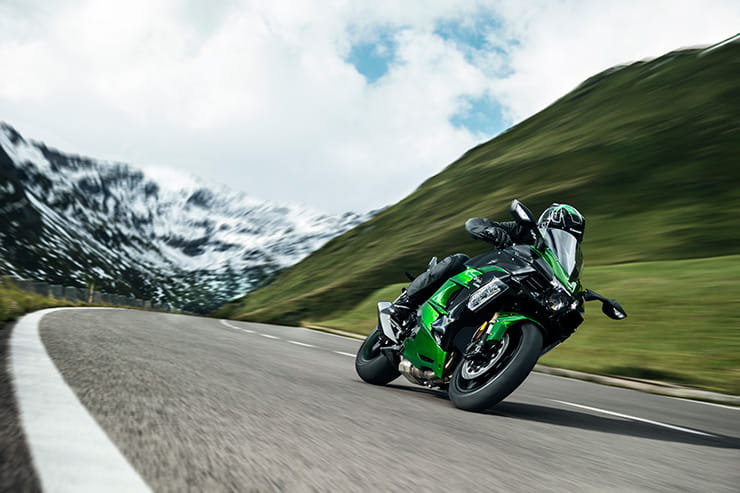 When it comes to crazy-fast sports tourers, Kawasaki knows a thing or two. Whether you’re thinking of the original ZX-10 of the 1980s, the ZZR1100, the ZX-12R or the current ZZR1400, for the last 30 years there’s been a Kawasaki dominating that niche.

Now it’s gone a step further, taking the bones of the madcap, supercharged H2 and fleshing them out into a boosted brute that weaves a new layer of practicality into the mix. Say hello to the H2 SX.

The adoption of the SX title is revealing; this bike is to the H2 what the Z1000 SX is to the Z1000. It shares much the same underpinnings as its progenitor but should have a far wider appeal. Right now, the Z1000 SX is Kawasaki’s best-seller in the UK, so there’s reason to believe that a market will exist for a spiced-up version of the same recipe. 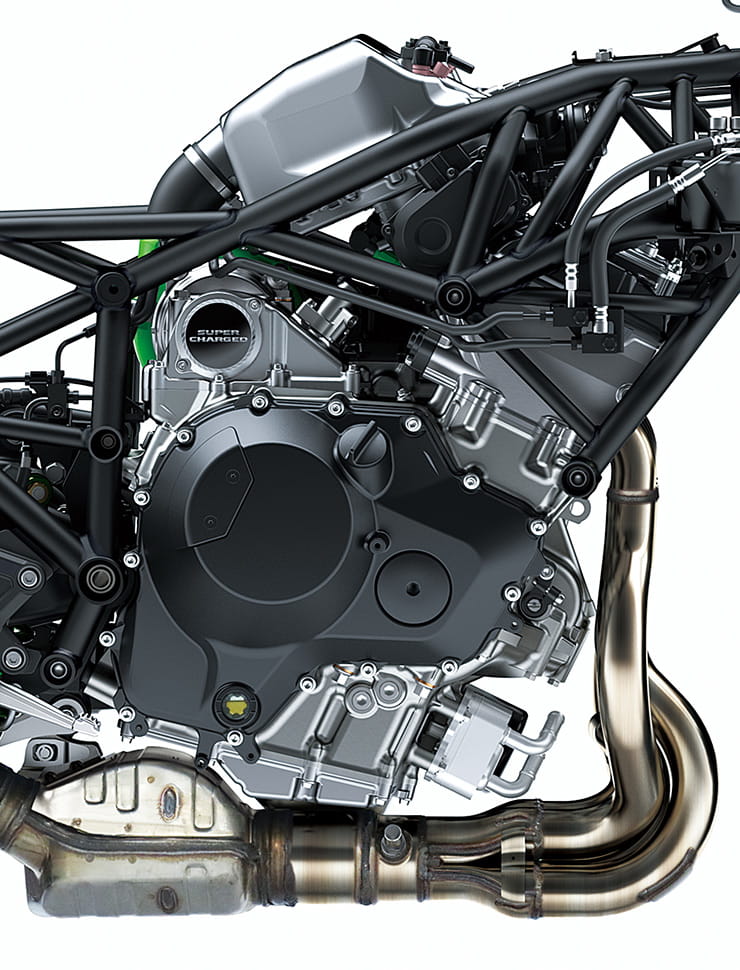 The H2 SX is more than just an H2 with a set of panniers, though. The engine, frame, electronics and bodywork are all either heavily revised or new.

Starting with that supercharged, 998cc four-cylinder motor, those basic specs are as they were on the H2 but there’s a host of detail differences. The aim was to give a broader spread of performance without denting the top end too much, and Kawasaki has hit the mark. The SX’s peak power is just 5bhp down on the H2’s; it makes 197bhp at 11,000rpm compared to 202bhp at the same revs. But peak torque is increased, up from 98.5ft-lbs at 10,000rpm to 101.3ft-lbs at 9500rpm. 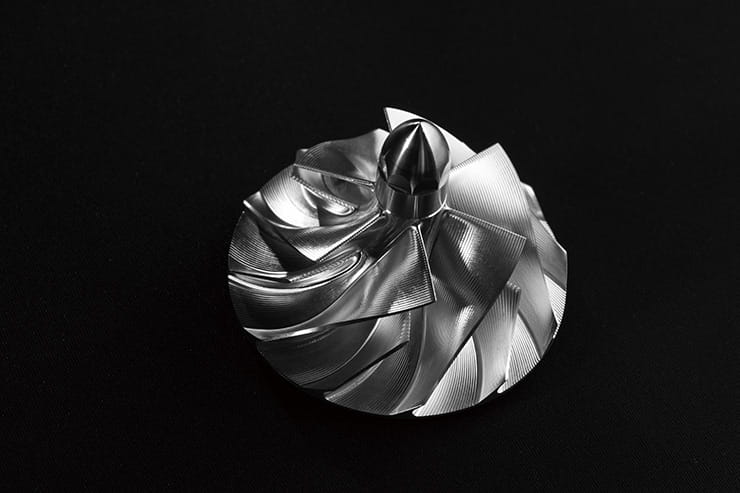 The changes to the engine include new pistons, a new head, new cylinders, camshafts and throttle bodies. And of course there’s a new supercharger.

In fact, the changes to the engine are intriguing as they move it away from the boost-heavy H2 to a design that’s more akin to a normally-aspirated motor. The supercharger has redesigned blades, and  while it’s the same size as the older H2’s, it presumably makes less outright boost, because Kawasaki has raised the engine’s compression ratio from the H2’s lowly 8.5:1 to a much more familiar 11.2:1. The supercharger, running at 9.2 times engine speed, will be spinning at just over 100,000rpm as the motor hits its 11,000rpm power peak.

The advantage of that increased compression ratio is that the engine will perform better in the mid-range, when the supercharger isn’t boosting at its maximum.

Other mid-range-focussed changes include smaller throttle bodies – down from 50mm to 40mm – and less valve overlap from the reprofiled cam lobes.

Interestingly, while Kawasaki is referring to the engine as a ‘Balanced’ supercharged engine, it doesn’t have the key detail of the Balanced Supercharged Concept engine that the firm showed two years ago. That motor featured variable intake vanes on the supercharger to improve airflow at different speeds, but the idea appears to have been dropped from the production H2 SX.

As well as more mid-range, the engine pumps out less heat than the H2, allowing more all-enveloping bodywork, and it’s more economical too. Allied to a 19-litre fuel tank, Kawasaki describes the bike’s range as ‘substantial’. 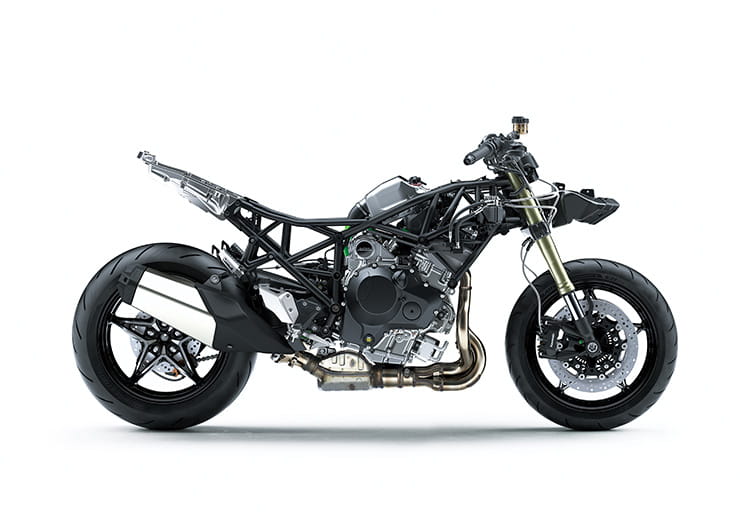 The more useable engine resulting from these changes is fitted to a reworked version of the H2’s trellis frame.

The clearest change is the new subframe, developed to cope with the 195kg payload that the SX is capable of carrying (up from 105kg on the H2). But there are more subtle alterations elsewhere. In particular, the whole steering head is 15mm further forward, allowing more steering lock (up to 30 degrees in each direction). The engine has also been tilted forwards by 2 degrees, lowering the centre of gravity and adding stability.

It’s not a lazy tourer, though; rake is still sporty at 24.7 degrees and the wheelbase is only 25mm longer than the H2’s. Even with the more substantial chassis and more enveloping bodywork, the SX is only 18kg heavier than the H2, at 256kg wet (260kg for the SE version, which we’ll get on to in a moment…)

The suspension is much like the H2’s with high-end, fully-adjustable 43mm USD forks and a KYB monoshock, again fully adjustable. That monoshock also gets a remote preload adjuster on the SX. 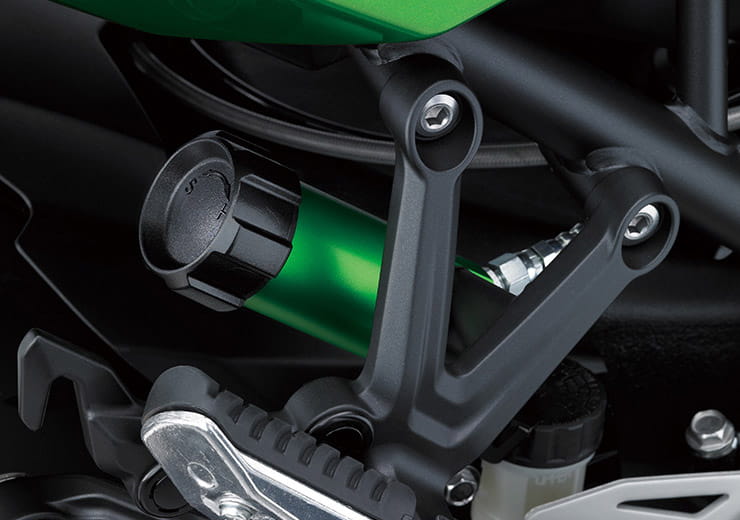 Buyers will get the choice of two versions of the H2 SX. Both are equally impressive in performance terms, but the H2 SX SE adds a whole extra layer of equipment above and beyond the already well-kitted stock bike.

Key changes to the SE model include the addition of cornering lights, which are built into the front edges of the side fairing panels. These are tied into bank-angle sensors, and come on in stages to illuminate in the direction you’re turning. 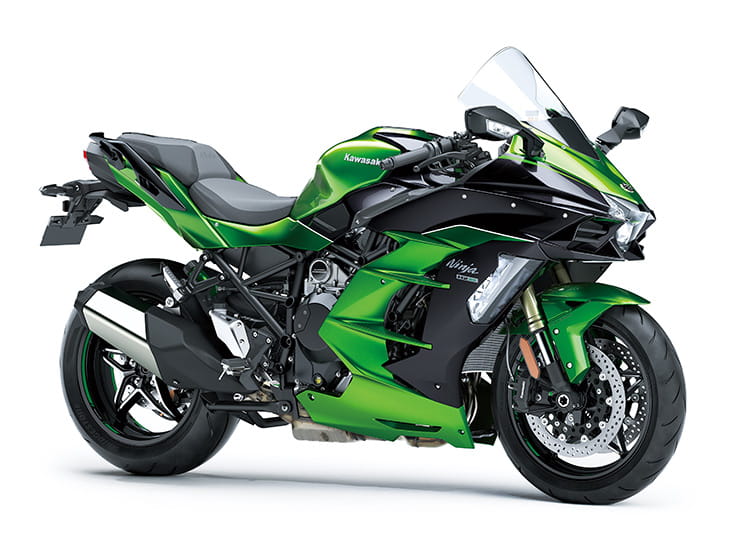 The SE also gets a different dash, with a TFT display. The stock SX’s instruments are already well-kitted, with fuel gauge, dual trips, bank angle display, boost pressure, boost temperature and even an ‘economical riding indicator’. But the SE gets far more, including two display modes – ‘touring’ or ‘sport’. In the latter, its colour screen gives info including brake and throttle application displays and G-force readings.

The SE also benefits from extra technology elsewhere. While all the H2 SX models have three-mode traction control and three  power level settings (100%, 75% and 50%), the SE also gets a launch control mode. Similarly, while both versions have cruise control and engine brake control, only the SE gets an up-and-down quick-shifter.

Oh, and then there’s colour; if you like Kawasaki green, you’ll be needing the SE. The base SX only comes in grey. 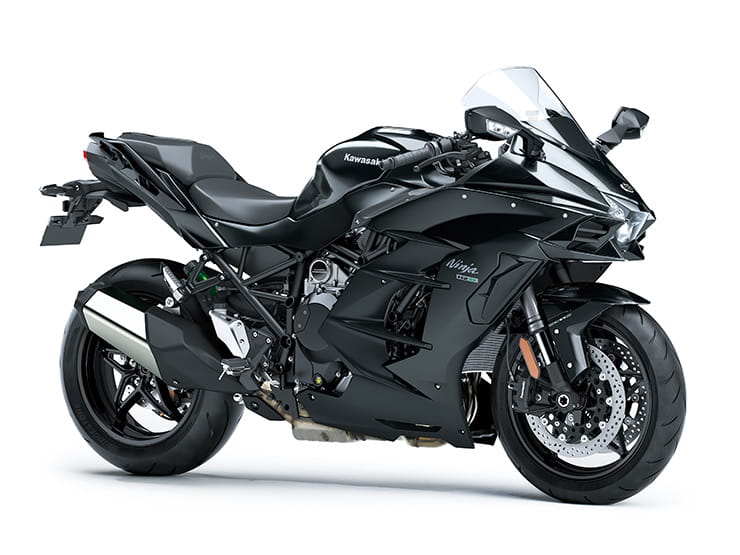 While we don’t have pricing details yet, you can be pretty sure that the H2 SX won’t be cheap, and Kawasaki will be ready to take even more money as you dig into the options catalogue.

The GIVI-made panniers are probably a must-have, and there’s a ‘smart bag’ tailpack option as well. Both are identical to the versions offered for the Z1000SX. Those panniers are 28 litres but don’t go planning on filling them with bullion, as their max load is only 5kg each.

Other options include a low seat that reduces the height by 15mm.

Non-SE buyers will also be able to kit their H2 SXs with some of the SE parts; the screen, centre stand, heated grips and 12V socket are all extras available for the base model but standard on the SE. 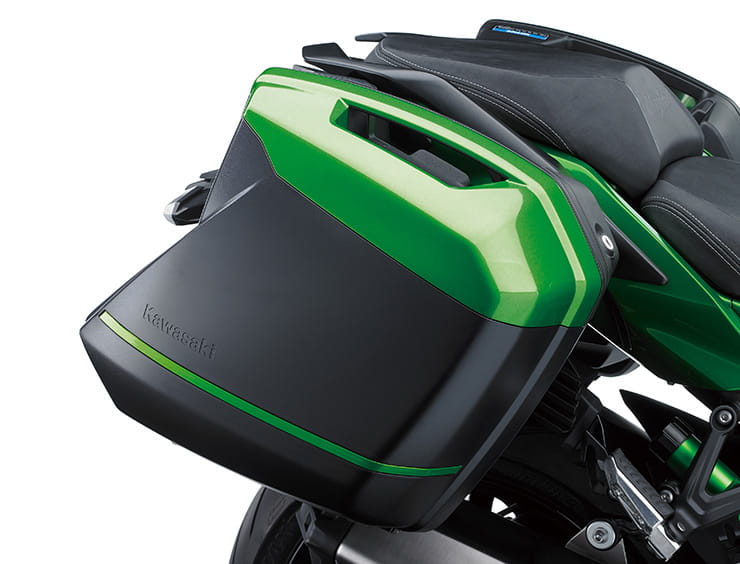 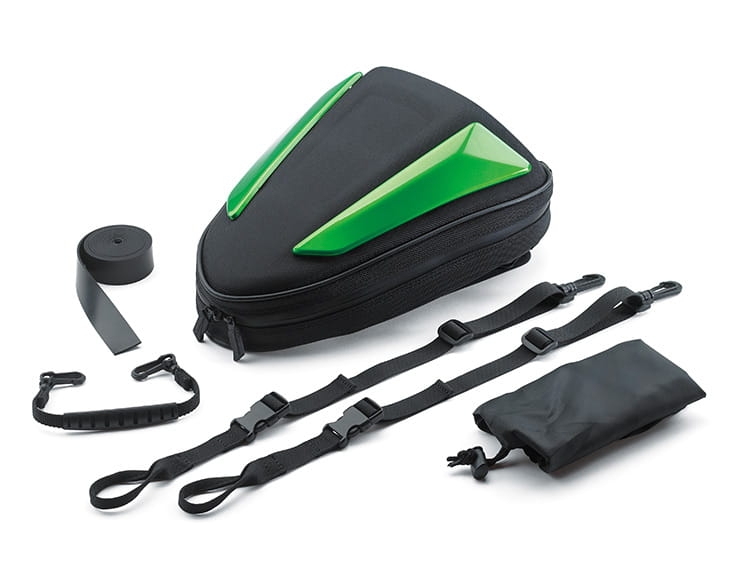