Coventry MotoFest goes from strength to strength in 2017 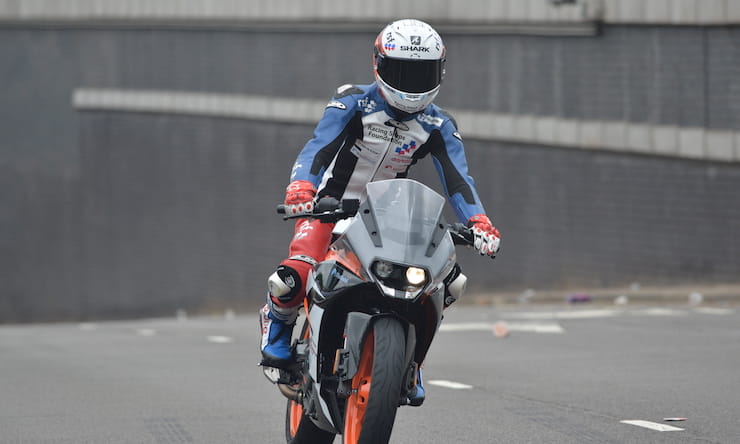 Coventry MotoFest roared back into action for 2017 as the UK’s spiritual home of motoring played host to an array of two and four wheeled stars on the city’s unique ring road circuit.

Following the debut of two wheels on track in 2016, the bikes were a lot more to the fore this year with a ride-out beginning at Kenilworth Castle, featuring bikes of all shapes and engine sizes, and ending on the Bennetts Sprint circuit officially starting the festival.

The star bike of the show came in the form of an ex-Loris Capirossi factory Desmosidici Moto GP bike ridden on the Bennetts Sprint Circuit by John Hackett of Coventry Ducati.

From the moment it was first fired up on its stand at the Greyfriars Green display area to its first appearance on track, the bike drew admiring grasps from the assembled crowds.

On track it roared around the 1.6 mile circuit in double quick time, providing a startling contract to array of road bikes, turbo chargers and an even a modified mobility scooter that lined up beside it. 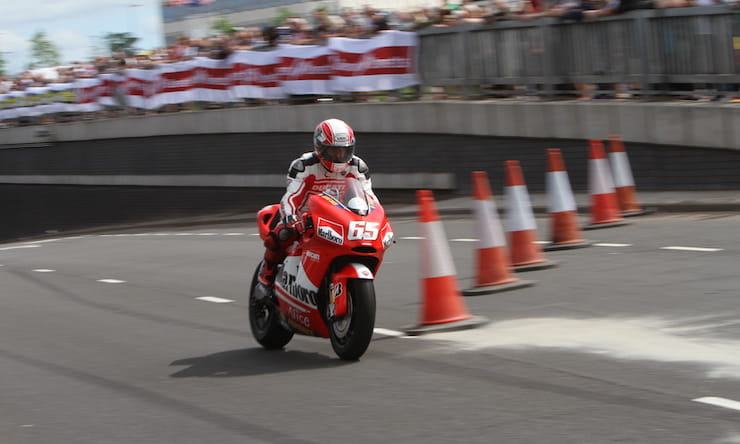 The Ducati’s main rivals for the crowd’s attention came from a trio of race bikes associated with motor cycle racing legends and world championship winners, brought to Motofest by Nathan Columbi of Team Classic Suzuki Racing.

First up on track Nathan rode the Bennetts Suzuki GSX-R1000, ridden in last year’s British Superbike Championship by Tommy Bridewell and adorned in its special commemorative Barry Sheene livery first sported by the bike at Brands Hatch in the 2016 BSB championship round.

It was later joined on track by Kevin Schwantz’s 1993 Moto GP Championship winning RGV500, clad in the Lucky Strike livery that it ran in during its victorious championship year.

The trio was completed by motorcycle legend Phil Read’s 70' championship ‘Life’ bike, sporting its original white with blue, red and green striped livery, which sat on display throughout the weekend. 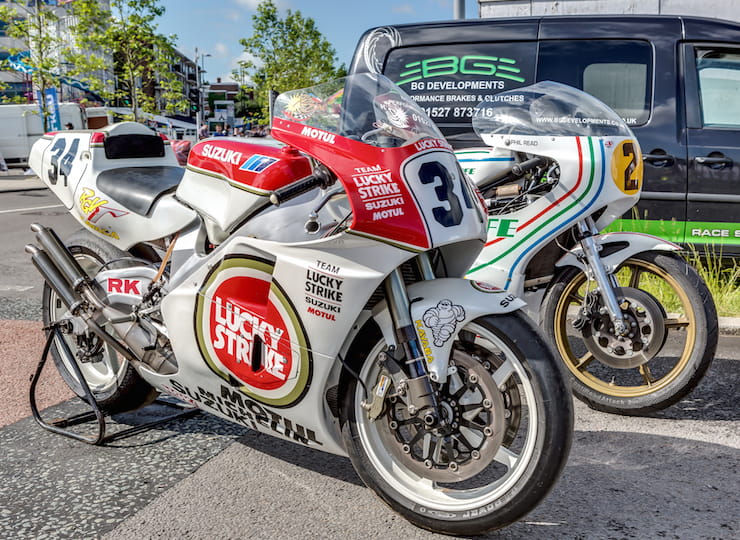 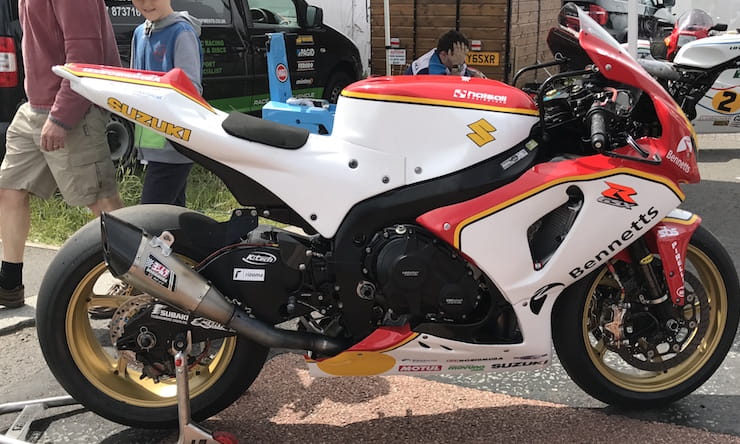 Bennetts-Backed Red Bull Rookies duo of Rory Skinner and Dan Jones were also out on track all weekend wowing the crowds. The pair shared a KTM RC390 which was kindly loaned to us by KTM. Rory also brought along his Honda RS125 Grand Prix 125 to add a dash of two-stroke smoke to the proceedings!

I had a great time last weekend at the Coventry Motofest. It was something really different to what I usually do and It was really fun to ride on the Coventry Ring Road, it was a great experience!  A big thanks to Bennetts for inviting me to come down and experience something completely new to me. Thanks also to KTM UK for supplying a 2017 KTM RC390. It was great to get back out on my Honda RS125 again as I really enjoy riding it and don't get out on it very often. I hope to go again next year!

The clip below is a lap of the Bennetts Sprint Circuit at Coventry MotoFest filmed from the front mudgaurd of Rory's honda RS125 GP bike.

The weekend of Coventry MotoFest was very relaxing, for me with my racing being so intense, it was nice to have a non stressful ride. The track was completely different to what I had experienced before, the event itself was different. I was on a bike that I had never been on and the crowds there were bigger then I had expected. Nevertheless I really enjoyed the experience of it, I had great fun with some great people over the weekend. I would like to say a huge thank you to Bennetts for having us there and also to KTM UK for supplying me with a bike.

The clip below is a lap of the Bennetts Sprint Circuit at Coventry MotoFest - Dan Jones aboard the KTM RC390 with Rory filming from his Honda RS125 GP bike.

Among the other bikes to feature on track were a Suzuki GSXR 1000, Moto Guzzi 950 Le Mans, Moto Guzzi 1100 sport and a drag bike, all playing their part in keeping two wheel fans at full throttle during the festival.

The Bull Yard bike display area hosted a range of bikes old and new in what organisers described as “the biggest display of bikes at the show since it was launched.”

An extreme wheelie machine and the Get On bike experience, proved popular two wheel attractions during the festival weekend. The Get On experience drew large crowds all weekend as provided first time riders with the opportunity to learn to ride on a selection of 50cc and 125cc in 20 minute taster sessions under the tuition of a qualified instructor. 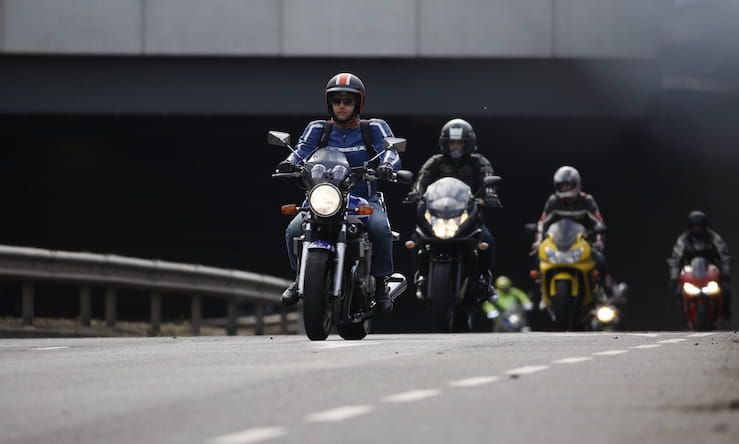 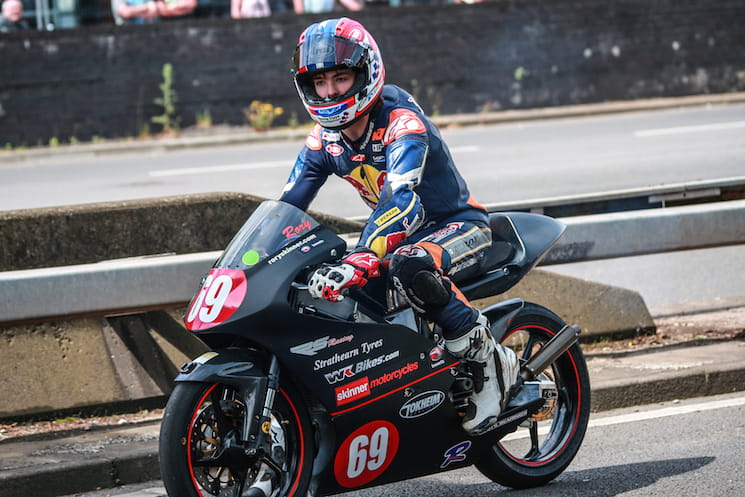 James Noble, Coventry Motofest Festival Director, said: “It’s been our biggest and best ever Coventry Motofest, with around 130,000 visitors over the two days enjoying all the action on the main ring road circuit and the festival activities. “For the second year we featured two wheel action on the track and the appearance of the Ducati Moto GP bike proved to be one of the highlights of the weekend. The increased number of bikes running on the circuit, the ride out to begin the festival and the record number of bikes on display demonstrate the growing influence of bikes at Motofest and we look forward to further expanding the two wheeled action at next year’s event.”

Coventry’s Motofest 2017 is a two-day festival dedicated to the city’s motoring heritage, which this year takes place on Saturday 3 June and Sunday 4 June.

There will be a range of automotive activities taking place from pop-up and demonstration events to static displays and fringe events at Motofest, now the largest free urban motorsport festival in the UK.