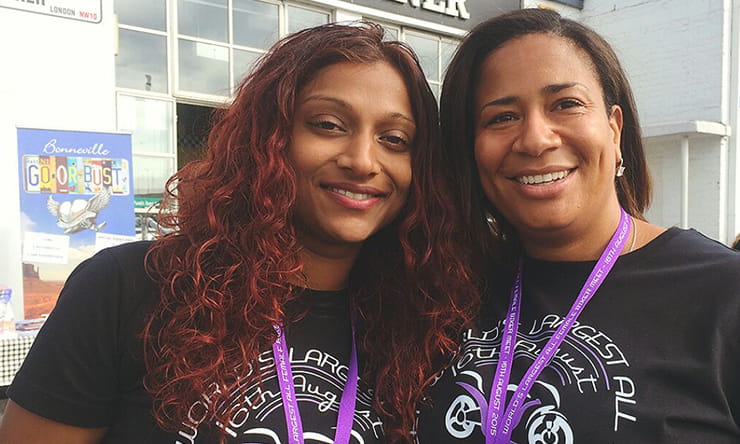 After the success of the World’s Largest All Female Biker Meet in 2015, Sherrie Woolf and Nimi Patel and gearing up for an even bigger event in 2017 and motorcycle insurance experts, Bennetts, are offering a policy discount for all attendees.

Over a thousand lady bikers are expected to gather at Lynn’s Raven Café in Whitchurch on Sunday 16th July 2017 in an attempt to beat their existing record of 618.

Two years ago, on 16th August 2015, 618 female bikers rode to the Ace Café in London and created a new world record for the Largest All-Female Biker Meet, they also raised £3,317 Hospice of the Valleys. This record remains in place.

At the same event, the record for the ‘Most Women Riding Motorcycles At Once’, which was originally set by an Australian group in July 2014 was also beaten. This record was taken back by the original owners with 1,002 women in September 2016.

The 2015 meeting was the brainchild of two such female motorcyclist, Nimi Patel from London and Sherrie Woolf from Wales. They were keen to raise awareness of the increasing number of women riding motorcycles, particularly for bike and clothing manufacturers in the hope of seeing improved female-oriented product ranges. 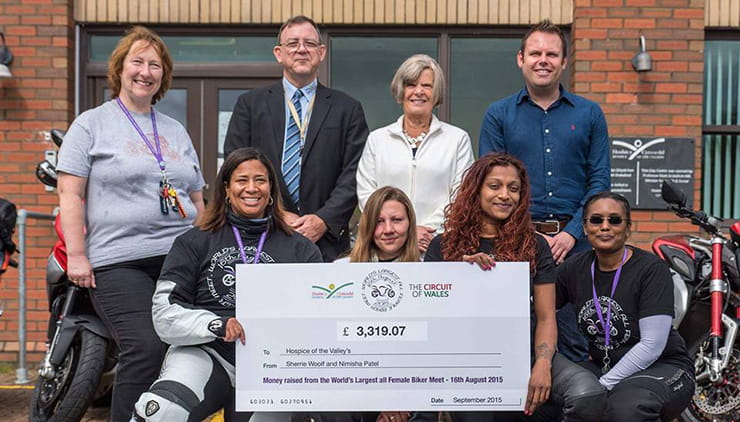 Ms Patel said, “I started a group for lady bikers to meet in the South East Region called South East Link Up. That was going really well so I was curious to see how many female bikers I could connect on a larger scale. I suggested it to Sherrie and the World Record Event idea grew from there.”

Ms Woolf added, “While the availability of bikes and protective clothing for women is improving, there’s still a long way to go so we’re keen to continue raising awareness that women are no longer just sitting on the back of the mens bikes, we’re buying our own and using them for touring, off-roading, track days and commuting, just like the guys!”

She continued, “With the more central location for this year’s event, we hope that even more women can attend so we can beat our current record. It will be another great opportunity for women to meet, share information and hopefully encourage more ladies to get involved with bikes.”

Stevie Muir from the Motorcycle Industry Association (MCIA) added: “It’s great to see these sorts of events, which celebrate the tremendous sense of community around biking.  We know more women want to ride from a piece of research we are in the process of completing. Headline figures suggest that 25% of the adult population would consider riding a motorcycle and of those, 48% are women. With the right support – we could start to see the balance between men and women riders even out in the future.”

Bennetts is offering up to a 20% insurance discount for all attendees (even the chaps). The following terms & conditions apply:

For further information about the event, please contact Nimi Patel and Sherrie Woolf on worldslargestbikemeet@gmail.com