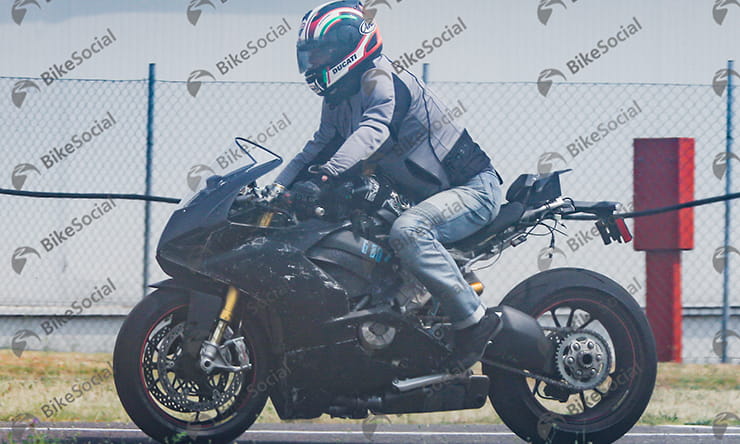 Ducati’s long-running line of superbikes stands for many things; exotic, beautiful, race-bred and always near the top of their class, one of the key threads running through their heritage is the use of desmo-valved V-twin engines.

But not for long. Later this year Ducati will whip the covers off this – its first mass-produced V4-powered superbike, the machine intended to replace the Panigale as both its top-line road bike and the firm’s WSB weapon.

That the V4 has been on its way is no secret. Ducati’s CEO Claudio Domenicali admitted as much earlier this year. Speaking at the MotoGP team presentation before the start of the race season he said: “The engine development we have made in MotoGP has been exceptional, we have an engine which is very reliable, very light, compact and has a lot of interesting technology. We are seriously thinking of introducing it to regular customers as it is a masterpiece of engineering.

“It must be translated into something that can be sold to customers at a reasonably, even if premium, price. So it will not be an exotic bike like the Desmosedici, but a high-end sports bike. We cannot say when it will happen but it is getting closer, much closer.”

How much closer is revealed in these pictures, which show a bike that’s nearing the completion of its development and will be ready for its public unveiling in just a few months’ time.

So, what do we know about it?

Well, it’s confirmed that when Ducati developed its second-generation Desmosedici MotoGP engine, which debuted in 2015, it did it with one eye firmly on building a production bike spin-off. Of course, the firm has made a road-going GP bike before, the Desmosedici RR in 2007, but that bike was very much a converted racer. Production numbers were kept in check by the tooling for the engine, which was worn out after making the 1500 limited-edition machines. Retooling for that bike would have been prohibitively expensive, but the demand for that £40,000 superbike proved to Ducati that there was a hunger for a MotoGP-style V4 road bike. So when developing the next-generation MotoGP engine it made sure that the same tooling limitations wouldn’t apply.

Like all Ducati superbikes since the 1970s, the new engine uses Desmodromic valves, mechanically closed by cam-actuated rockers rather than springs. That means valve float – often the limiting factor when it comes to revs in a conventional, sprung-valve engine – isn’t an issue, and that cams aren’t working against spring pressure when opening valves. The downsides of additional complexity and more moving parts are ones that Ducati has had many years to solve. 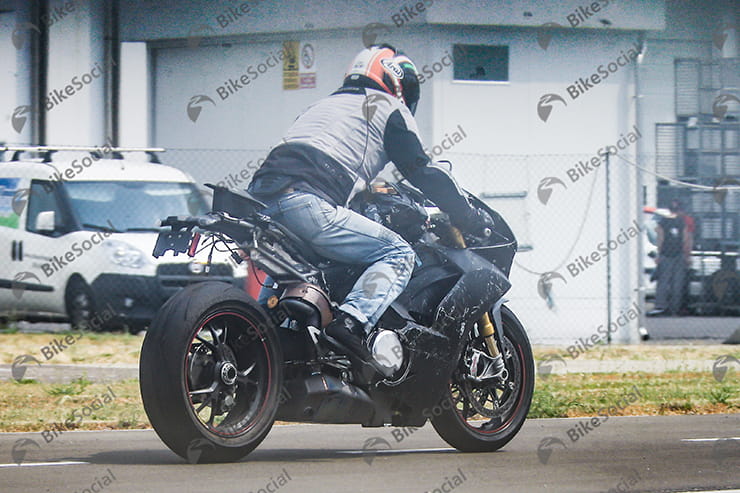 However, there’s little else traditional about the new bike.

The engine is bolted to a frame that appears to follow much the same thinking as the Panigale. That means there’s no full frame; the engine provides much of the strength and the swingarm is bolted straight to it. A shortened, semi-monocoque chassis is attached to both cylinder heads and to the headstock, with the airbox housed inside it. It appears from these pictures that the new frame is aluminium, like the Panigale, rather than going all-out for a carbon-fibre version as used on the new 1299 Superleggera.

However, there will – of course – be several versions of the bike on offer. Some Italian sources claim that the range will mirror that of the current Panigale line-up. Notably, they suggest that while the WSB-homologation ‘R’ model of the new V4 – a range-topper with carbon bodywork and all-singing, all-dancing suspension components – will use a 1000cc engine, the normal and ‘S’ models will have a larger, 1200cc V4.  Currently the Panigale pulls a similar trick, with the ‘R’ using a race-legal 1198cc V-twin and the other versions adopting a larger, 1285cc motor.

Whatever the final capacity, it’s sure that the new V4 will be more powerful than the Panigale’s V-twin. With the normal Panigale now making 205hp, and the Superleggera offering 215hp, we could be looking at a 220hp production bike.

These pictures confirm that the new bike isn’t a pure MotoGP replica despite its similar engine. As well as the Panigale-style chassis – which is a far cry from the beam frame used on the current Desmosedici – the styling is a development of the Panigale’s look. It’s not just mock-up bodywork, though, this is the real appearance. The headlights are smaller and set further back than the Panigale, and while this bike is missing its tail unit, another prototype revealed tail lights that are again different to anything in the current range. The nose shape is sharper than the Panigale’s, with a more thrusting shape to the intakes, while the side panels curve over the frame to meld into the tank area.

At the back there’s a new single-sided swingarm with a conventionally-positioned shock. The Panigale’s horizontal shock design wouldn’t fit alongside the wider V4 engine.

The normal combination of Brembo brakes and Ohlins suspension is expected, at least on the high-end versions of the bike, and given Ducati’s love of electronics we’re expecting an unprecedented suite of software. Think launch control, traction control, wheelie control, active suspension, riding modes, cornering ABS and cornering lights at the very least, and don’t be surprised if Ducati throws in some more gadget surprises, too. Voice control for some of those functions, perhaps? It would help cut down on the ever-rising button count.

While the new V4 will be revealed later this year and go on sale in 2018, the Panigale isn’t dead just yet. In typical Ducati style it will remain the firm’s WSB machine through 2018, allowing a year to get the race version of the V4 up to speed before it enters the crucible of competition. And given that Ducati has created a Euro4-compliant version of the Panigale’s engine – for both the 1299 Superleggera and the 1299 R Final Edition that will be launched on July 7 – it’s certain that the motor will remain in use in some bikes for several years to come. It just won’t be Ducati’s top-line superbike engine anymore.