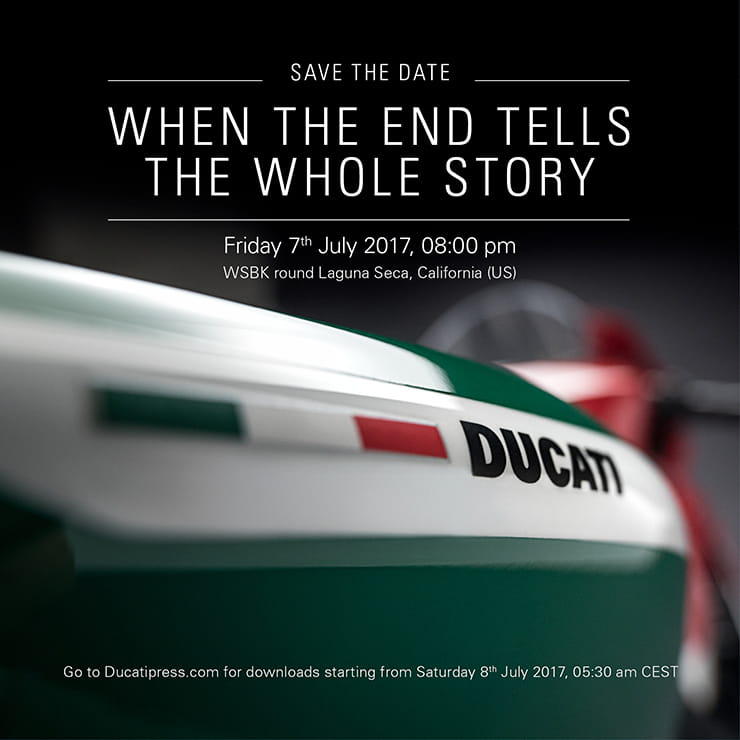 Come November and the year’s big motorcycle shows you can be sure that the hottest topic of conversation will be Ducati’s forthcoming V4 superbike. Expected to be unveiled before the end of this year it will be an affordable Desmosedici – so that excitement will be well-founded.

But let’s not write off the Panigale just yet. Ducati certainly hasn’t. The firm has released a teaser video for a ‘final edition’ version that will be launched at Laguna Seca on the Friday of the WSB meeting at the circuit (7th July). A lone photograph of the bike’s tail has also been released, tagged with the line ‘When the end tells the whole story’ – suggesting that this will be the most complete Panigale of them all.

Though no official specifications have been announced or varified, BikeSocial understands the new Ducati will be named the 1299 Panigale R Final Edition (FE), which will come with a price tag of just under £35,000 and it’ll make more horsepower than the 1299 Panigale S (205HP) but less than the Superleggera (215HP).

Does that mean it will even outdo the recently-launched, carbon-framed 1299 Superleggera? Don’t be so sure. Remember that the Superleggera doesn’t carry the Panigale name, despite sharing the same technology and design. It’s splitting hairs but it means the Final Edition Panigale can be the ultimate ‘Panigale’ without topping the Superleggera.

So let’s start with what we know for sure. One thing is the paint scheme. The lone picture clearly shows that there’s a strong element of green on the tail, meaning this bike will carry a variation of Ducati’s red, white and green Tricolore paintwork. A Tricolore was offered right at the start of Panigale production in 2012, too, tying the two ends of the bike’s life together, but this version clearly has more green in its design.

The teaser video also gives sight of a 1299 Superleggera-style, dual high-level exhaust system. That’s important, as it suggests the new bike will meet Euro4 emissions limits. Strictly speaking it will be a legal necessity for Ducati to make any new version of the Panigale Euro4-legal, even though the stock version remains only up to Euro3 standards. Doing so clearly isn’t a huge problem – the smaller 959 Panigale is already Euro4-legal, as is the highly-tuned 1299 Superleggera. But once the Euro4 engine is in place in the normal Panigale, it opens the door for Ducati to extend its production run to beyond the cut off of the ‘derogation’ rules that will the firm sell the existing bike until the end of 2018 if it wants to. Could the firm be planning to sell the Panigale alongside the new V4? It would certainly make sense to do so, giving an option for buyers who want a V-twin superbike – something that no other firm offers anymore. 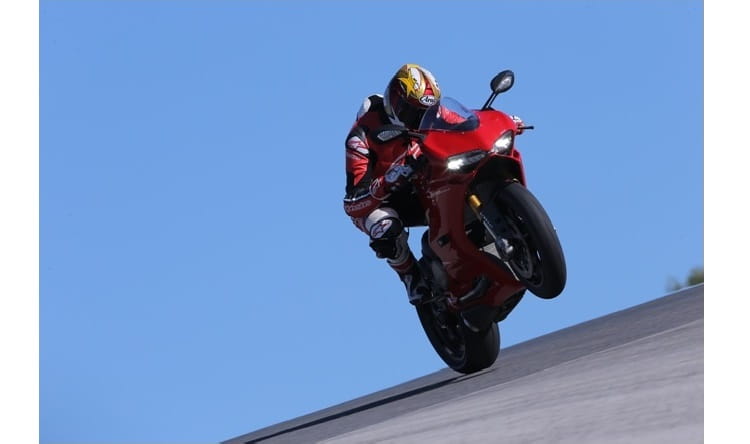 We also know that Ducati plans to keep racing the Panigale during 2018, and as such it might use the new ‘Final’ version as a tactic to homologate some changes. Again, doing so would require the production version to be Euro4-legal, and it would need to meet minimum production levels – 500 bikes over two years – and have a price tag under the €40,000 cap imposed by the series. To be WSB-legal it would need to use the smaller 1198cc engine instead of the 1299 Panigale or Superleggera’s 1285cc V-twin, making the Final Edition effectively a replacement for the current Panigale R.

Whichever route Ducati takes, if the new model is to live up to the idea of being the most complete Panigale yet – something that the ‘tells the whole story’ tag line suggests – then it’s going to be pretty special.

Perhaps the biggest question of all hangs over the bike’s frame. While it’s likely to be the usual Panigale’s aluminium semi-monocoque design, Ducati has also got the Superleggera’s all-carbon chassis in its armoury. At the moment that chassis is the Superleggera’s USP, but having put all the effort into developing it, Ducati must have at least considered the idea of using it in another Panigale derivative. Particularly if the firm takes the WSB homologation route, making this new edition an 1198cc Panigale R replacement, the carbon frame might make a lot of sense without stepping on the toes of the ‘ultimate’ 1299 Superleggera.

With only a couple of weeks to go until the bike’s unveiling, it won’t be too long until we get all the answers.