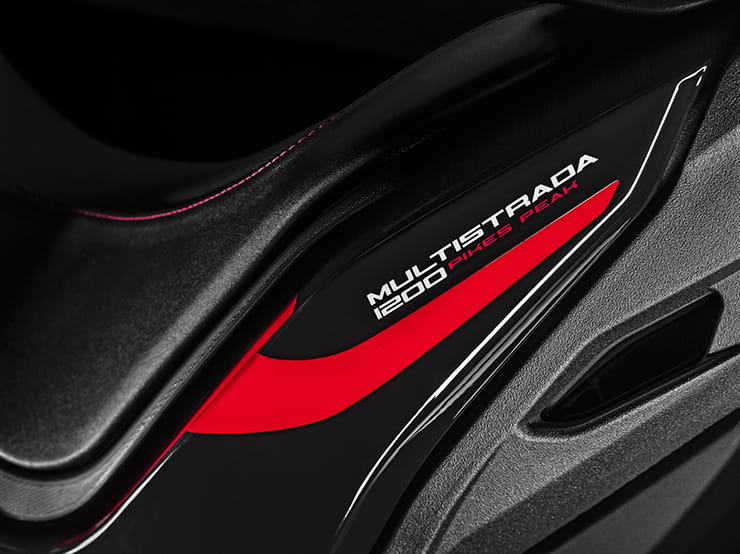 Did you think that the Ducati Multistrada 1200 was about as fast an adventure tourer as the world needed? Well, it’s about to get replaced with a more powerful, lighter version for 2018.

New type-approval documents from the California Air Resources Board show that Ducati has certified a new Multistrada 1260 as a 2018 model. The documents show that the Multistrada 1260 uses a 1262cc V-twin instead of the current 1198cc motor. That means next year’s bike’s engine will be a derivative of the variable-valve-timing Testastretta DVT motor used in the XDiavel. Featuring the same 106mm bore as the existing Multistrada, it has a stretched 71.5mm stroke, up from the current Multi’s 67.9mm.

In the XDiavel, the result is the same 152hp/112kW peak power as the Multistrada, at an identical 9500rpm, but the cruiser’s torque – surprisingly a fraction below the Multistrada’s (126Nm/93lbft againt 128Nm/94lbft) – peaks far lower, at only 5000rpm compared to the Multistrada’s 7500rpm.

However, the version of the 1262cc engine to be used in the 2018 Multistrada 1260 won’t be in the same state of tune as the XDiavel. The CARB documents reveal that its emissions, while still well within legal limits, are higher than the XDiavel’s, which is likely to point at an engine tweaked towards more performance. By moving the torque peak higher in the rev range, overall power will also be increased. Something in the region of 160hp/119kW should be within easy reach if the 1262cc motor is tuned to have a performance curve similar to that the existing Multistrada. Torque is likely to be up to around 99lbft/135Nm.

At the moment, the 2018 emissions documents make no mention of the Multistrada Enduro or the recently-revealed Enduro Pro. Given that they’re younger bikes than the normal Multistrada, the Enduro versions may soldier on in 1998cc form during 2018.

One other nugget of information offered by the CARB document is that the new Mutistrada 1260 machines will be around 10kg lighter than the existing models. While the weights shown aren’t familiar – CARB uses an ‘estimated inertial mass’ measurement, intended to also account for the weight of an average rider as well as the bike itself – the document shows the new bikes will have an EIM of 340kg, where the existing model has an EIM of 350kg. In more familiar terms, it means the 2018 Multistrada will weigh around 222kg wet, or 199kg dry, compared to the current bike’s 232kg wet and 209kg dry.

The updated bikes’ styling changes are still a mystery. Ducati has a history of updating engines and increasing capacities without major visual redesigns, but the fact that the 2018 model is lighter than the current one hints at changes beyond the engine alone.

Ducati’s main new model launches are expected at the EICMA show in Milan this November, but with the new V4 superbike destined to grab all the headlines at that event the firm might opt to release details of other updated machines sooner than that.