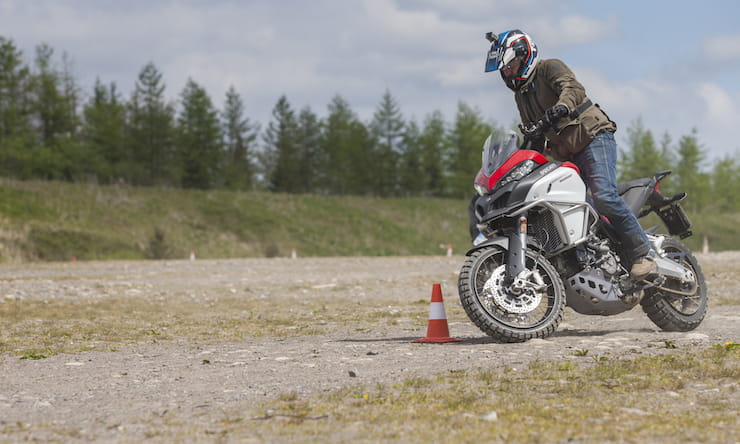 The Ducati Multistrada Enduro arrived in 2016 and it's fair to say has, like most other bikes in the large capacity adventure class, struggled to challenge the dominance of the BMW R1200 GS. To remind us of why we should consider one over that obvious Bavarian option, Ducati took along its Multistrada Enduro Experience, usually based in Italy, to the recent Touratech Travel Event in Wales, allowing riders to sample the bike in on and off-road conditions. Here's how we got on... 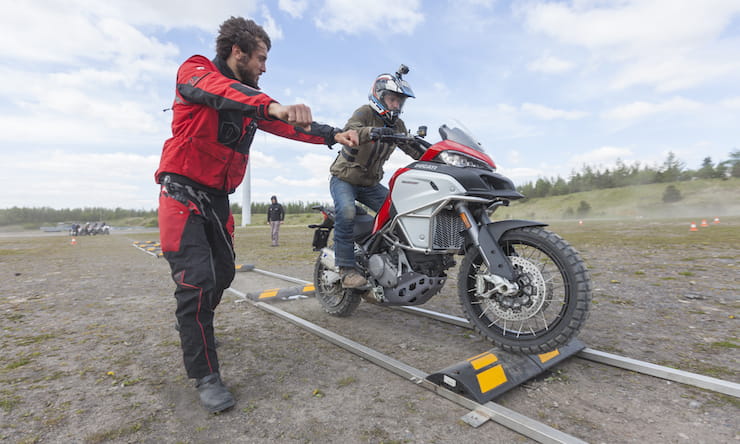 Getting on the bike the first thing you notice is the height of it. Official seat height is 870mm (850mm and 890mm options available), but it feels taller than that. At 5'10”, on a R1200 GS I can just about get both feet flat on the floor. On the Multistrda Enduro I can only get tip toes. Off the stand the bike feels weighty; perhaps not as top heavy as a Triumph Explorer, or as elephant like as a Yamaha Super Ténéré. The bars sit high in front. The 30-litre tank (up from 20-litres on the regular Multistrada) flares out in front of you and makes the bike feel wide. The hardest part is getting the bike started. Keyless ignition gives rise to a multiple button prod operation before the trick full colour TFT dash panel illuminates into life. Then fires up the engine; the same 1198cc DVT Testastretta that powers the regular bike.

There is a bit of intimidation to begin with; tall seat, expensive bike, and the pressures that comes with riding in an unfamiliar group. Four riding modes are available; Touring, Sport, Urban and Enduro. These settings change the configuration of the semi-active suspension, as well as throttle response and traction control limits to give the bike different characters, depending on what kind of mood, and surface you're riding on. Enduro mode also cuts power to 100bhp and also cancels ABS to the rear and softens it to the front.

For now we're on the road and taking a 45-minute loop around the Welsh town of Ystradgynlais, home of Touratech UK. The first thing you notice about the Enduro is the ride quality. In Touring mode the bike feels soft and supple. The way it floats over manhole covers and cracks and holes in the road is sublime. It makes my Telelever equipped GS, also with semi-active suspension, feel hash and unforgiving as a result. For someone with a bad back, the Multistrada Enduro was something of a revelation and I'd say the best sprung bike I've ridden.

Then there's the power. With 160bhp the bike is ferociously quick.
Nathan Millward 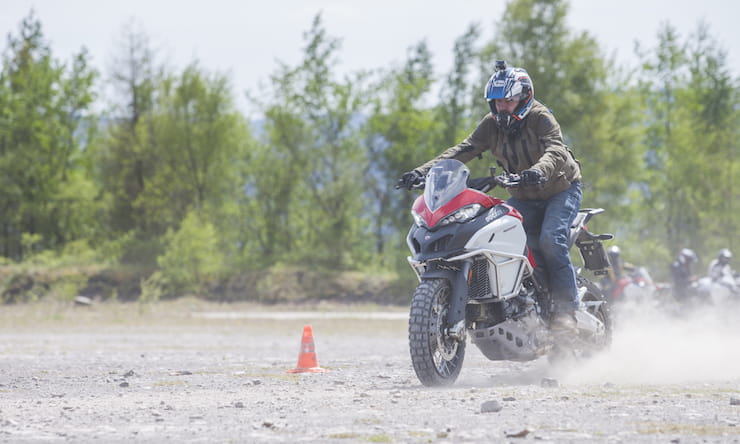 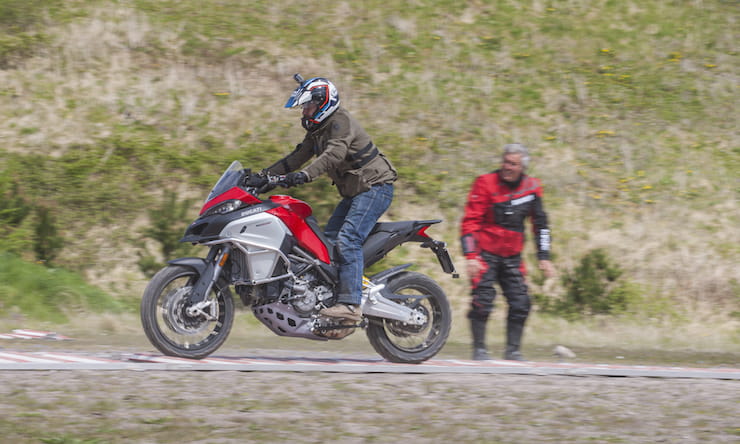 If you're used to the 17-inch front wheel of a regular 'Strada then jumping on the Enduro you will notice the slight dullness in change of direction that comes with a 19-inch front wheel. The upshot is that it doesn't track and react to poor UK road services quite so much and feels more relaxed as a result. The changes Ducati has made to the Enduro, including all new twin-sided swingarm, front angle offset, increased rake and new handlebars seem well thought through, and effective. It doesn't feel like a bike modified for a new purpose, more a bike that should always have been this way. Comfortable as well.

Then there's the power. With 160bhp the bike is ferociously quick. Light years ahead in terms of thrust in second and third than the liquid cooled GS, and arguably more immediately punchy than the XR1000, which you would expect with it being a twin. Throttle delivery is good as well. I remember riding a 2014 bike and thinking the fueling was poor at low revs. Not so now, with a very progressive throttle response and clean fueling, even when down to urban speeds in higher gears, traits that are essential to the off-road riding that is to come. The only slight negative is a few vibrations through the seat, but one of those traits you soon tune out of. 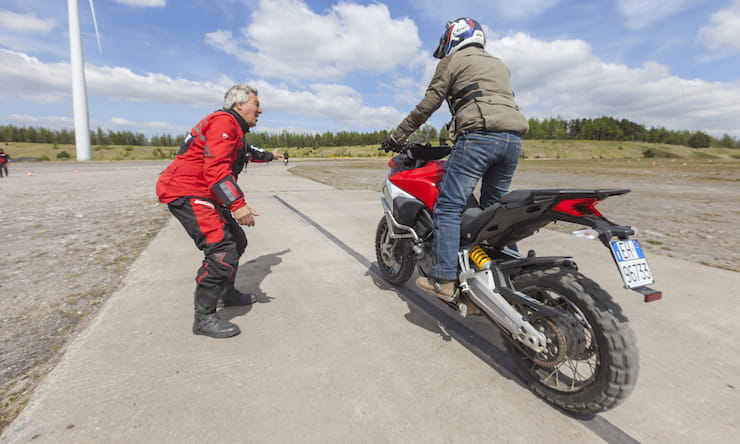 Fair to say I didn't have high hopes for the Enduro in an off-road setting. Too tall, too top heavy, and probably too cumbersome to be used in this capacity. More a pretend large capacity off-road bike, like most of them are these days. Well, I was wrong. With the wingmirrors and hand guards removed, and the screen swapped for a stubby, low height version, not to mention knobbly tyres fitted, the bike was in its element in this terrain. That supple suspension on the road translates well onto to the bumpy surfaces of Walter's Arena, usually home to the BMW Off Road Skills course.

Up on the pegs and the bike sheds its weight nicely. It feels agile, oddly light, and the throttle response – now in Enduro mode – is beautifully progressive, allowing you to feel the power in and control the point at which the rear tyre breaks traction; traction control allowing a decent amount of slip before softening the power to bring the bike back inline.

There was also surprise in how well balanced the bike was. Riding a big bike off-road is all about precision and slow speed stability and control. The assumption with the Enduro is that it would be too top heavy and therefore difficult to do the tight cone work and figures of eights – a mainstay of off-road training schools – but it wasn't. The only negative was a slightly heavy clutch lever, meaning that after a few hours of clutch feathering you soon start to get some fatigue in your clutch operating fingers.

Better than a GS in this environment? I'd probably argue it was, mainly because of the extra suspension travel, and the added suitability of regular telescopic suspension over the BMW's Telelever front suspension in off-road environments. The only downside of the Multistrada is that if and when you do drop it – and you haven't first removed the hand guards with integrated indicators – you're likely to smash those and have a tough job picking it up (254kg with a full tank – about the same as a GSA). At least on a GS you're given a helping hand by the horizontal cylinder heads that prevent the bike falling flat. 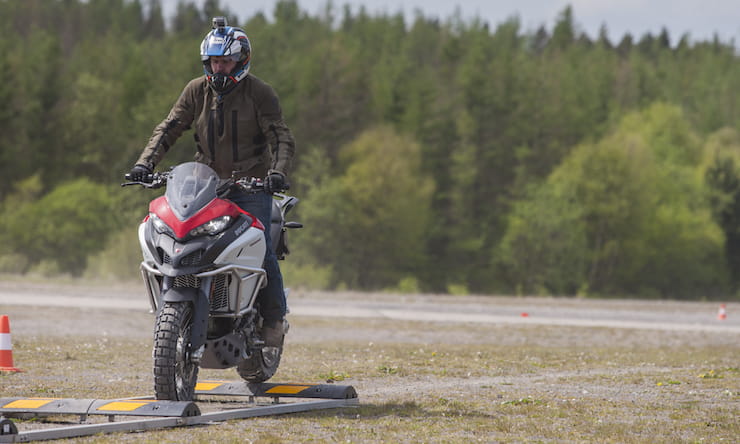 The only other bike that is going to push this one close is the KTM 1290 Adventure R. That would be some showdown, and maybe throw in Honda's current Africa Twin, just to see where a bike at a more sensible price point fits in to this increasingly expensive, and arguably pointless dual sport category, as the thought of taking your own Multistrada Enduro off-road (especially if it's on PCP) isn't going to occupy the minds of many owners. Which is a shame, because it can do it, and do it very well.

As an overall conclusion, even if you had no intention of taking a Multistrada off-road, then after today's experience I'd still probably take the Enduro over the regular model, simply because it works so well as a road bike, what with the more forgiving large diameter front wheel and long distance friendly 30-litre tank. In a way, the Enduro badge does the bike a disservice, as it's simply a very good all-rounder, that also happens to be very good in the dirt (with the right tyres of course).

Touratech Travel Event
The Touratech Travel Event is now in its eigth year and continues to grow. It's a free event, held over a long weekend, usually held early May, and offers a chance to ride the world- renowed Walter's Arena off-road riding area. Stalls and exhibitors are also in attendance, with guest speakers from the travel community and the chance to meet like minded people who share a passion for getting out on their bikes and exploring different paths. Camping is available, with the event serving as a great opportunity to explore then excellent riding roads of the Brecon Beacons and beyond. Keep an eye out for details... 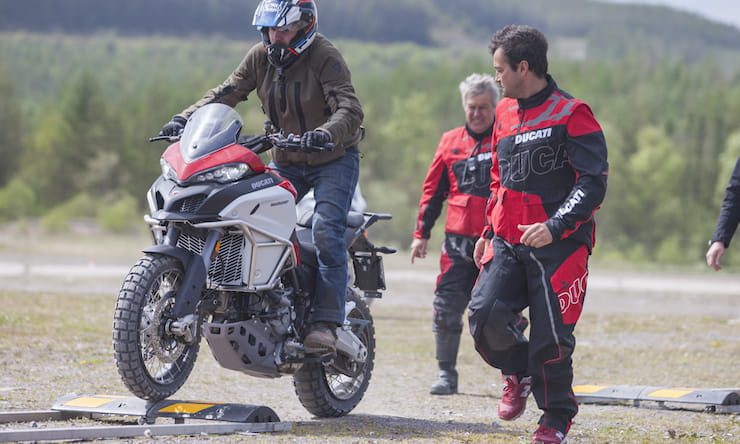