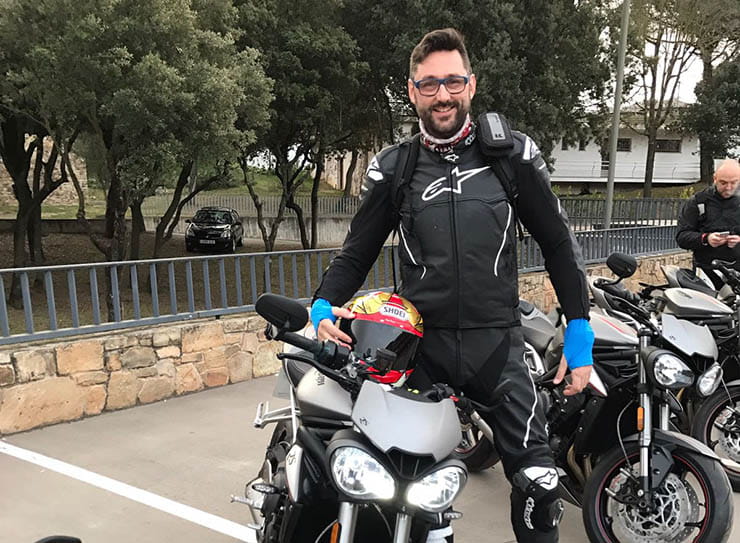 Triumph has chosen to launch not just one, but three Street Triples in 2017, and on paper at least they’re all very different. In fact, if you include the lower seat height version with its own suspension and frame set-up, and the A2-licence friendly 660cc-powered version, there’s actually five new Street Triples for this year. For now though we’re in Barcelona trying out the top-spec RS, which will be the the first model to hit the showrooms.

All three bikes use an aluminium twin-spar beam frame and are based around the brilliant three-cylinder Triumph Daytona 675 liquid-cooled motor. Triumph say the new Street Triple 765’s lump has 80 new parts including a new crank, pistons and Nikasil plated aluminium barrels and an increased bore and stroke. In the standard S version Triumph say it makes 6.6% more peak power than the outgoing model, mostly thanks to the bigger bore we’d imagine. All three bikes weigh in at a featherweight 166kg.

The RS is the top-spec track refugee which should be as at home on track as it is on the road. We’re riding it on track this afternoon but, for now, we’re out on some wet mountain roads. It gets a more powerful 121bhp motor that makes peak power at 11,700rpm, and peak torque of 56 ft-lb at 10,800rpm. There are five rider modes on the RS – road, rain, sport, rider’s own setting and track. The ABS is switchable, its gets the full-colour clocks and joystick control switchgear, stickier Pirelli Diablo Supercorsa SP tyres, a quick shifter, and those Brembo M50 monobloc calipers, but with a fully-adjustable ratio and span adjust brake lever. Like the R, the seat height is higher at 825mm (810mm standard), and it also gets steeper frame geometry at 23.9 degrees of rake and 100mm of trail to sharpen the bike’s reflexes and turn-in.

Calling in from Spain, live from the launch, our man Marc Potter said that the new RS is a big step forward from the old bike. He said: “Triumph have taken the Street Triple and made it better, but that’s not really a surprise. We’ve ridden now for about an hour in the wet. The roads are really twisty and we’re not really pushing it, but you can tell straight away that there’s more top end on this bike. In fact, it makes be wonder why you’d want the big Speed Triple at all. We’re not pushing the suspension hard, because its wet, but it feels really plush and the brakes give loads of feel. I’ve forced the traction control to kick in a few times and it all works well. It’s got more guts in the middle and definitely more top end. It’s got a really nice feel, the clocks are easy to use.”

Check back later for Marc’s full review of the new Street Triple RS.