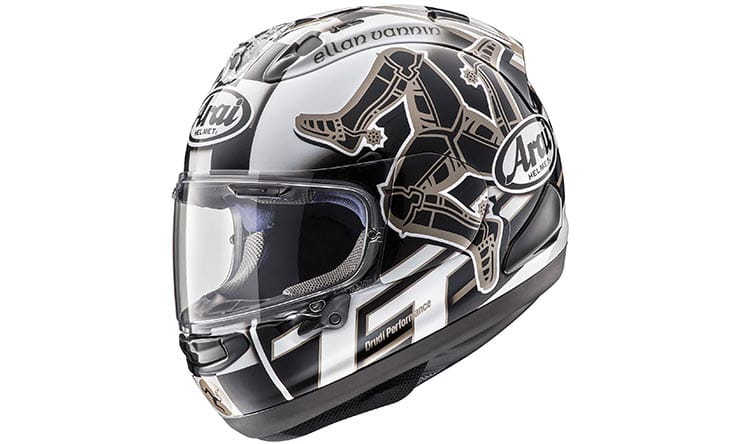 Arai is back with a new edition of it’s ever popular TT helmet for 2017.

Not only are they an official partner of the iconic event, they have also protected the heads of some of the biggest names in road racing, including Joey Dunlop, Michael Dunlop, Ian Hutchinson and Bruce Anstey.

Despite carrying a high end price tag, Arai’s annual limited edition TT design is always hugely popular. This year’s edition (pictured) will go on sale for the first time in the Arai Village, which is situated in the TT paddock on the 27th May, just as the first bikes hit the track for practice. Since the first Arai TT edition in 2007, these helmets have sold out in double quick time, so it’s fair to say that the demand for the helmets is going to be extremely high again this year. Arai themselves advise to order your helmet early to avoid disappointment!

The Isle of Man TT helmet is based on the range topping RX-7V and features a host of exclusive safety and comfort innovations that we’ve come to expect from Arai. The visor pivot is lower than on previous Arai helmets, allowing a smoother shell shape. This is claimed to improve the helmet’s glancing off ability. The liner is also fully removable and washable.

The stunningly painted exterior designed by helmet painter to the stars Aldo Drudi of Drudi Performance. Yes, that’s the name that adorns the helmets of around a third of the MotoGP grid and countless other racers around the globe. The design cues include the official TT logo below the visor and the ancient Triskelion symbol that’s synonymous with the island.