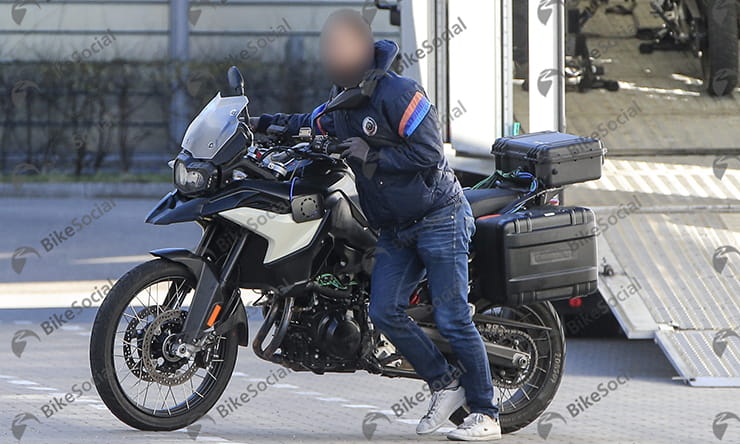 BMW’s F800GS might never have hit the sales heights of its 1200cc, boxer-engined R1200GS cousin but it’s still a mainstay of the company’s range. For 2018 it’s set to get the biggest makeover in its life.

In fact, new spy shots reveal that next year’s bike is effectively a clean-sheet design. The engine, frame, suspension and styling are all completely new.

While this is the first time the bike has been seen, these pictures reveal that the new model is already in a near-production state. Only a blanking plate over the BMW badge, some matte black paint and a small bit of duct tape disguising the headlight shape separates this from the production version. It’s speculated to be called the F900GS, keeping a close nominative link with its predecessor but with a slightly larger engine capacity to ensure a performance increase while meeting the latest Euro4 emissions rules and being ready to hit 2021’s Euro5 limits.

Let’s start with the chassis. While the bike’s minder unfortunately blocks a clear view of the entire frame, it’s immediately clear that this isn’t the old-style steel trellis. Instead it appears to be an aluminium beam frame. Behind it sits a new aluminium swingarm, and underneath is slung a completely new parallel twin engine.

That motor might retain the current bike’s general layout but look closer and you’ll see that it shares no components with the old engine, which can be dated back to the 2006 F800S and is clearly long in the tooth.

Most notably, the transmission’s output sprocket and drive chain is now on the left hand side, with the exhaust moving to the right as a result – that’s the opposite layout compared to the current model. The engine cases are also new, and the positions of the water hoses suggest a new cooling system design. Such is the bike’s level of completion that there’s already ‘BMW’ branding cast into the engine covers – rather spoiling the firm’s efforts to remove badging from this prototype.

Although any guesses at performance are purely speculative at this stage, it’s unlikely that BMW will allow the new model to make less than the old 800’s 85bhp. The bike’s tyre sizes suggest that power hasn’t been raised by an excessive amount, though, so don’t expect to see more than 100bhp. Such a figure would also be moving it too close to the 125bhp R1200GS for a comfortable split in the model range.

The bike’s styling is a predictable update on the existing look. Beak? Check. Lopsided headlight design? Check. Boomerang-shaped side panels? Check. This model appears to be the mid-range bike, effectively replacing the current F800GS. BMW’s current range also has the lower cost F700GS (still really an 800) with cast wheels, right-way-up forks and more subdued styling as the entry-level version. The more aggressive F800GS Adventure sits at the top of the line with another different set of body panels and a more off-road setup.

The 2018 range is likely to follow a similar pattern, although there’s a chance that the F700GS’s entry-level position might be taken by a carried-over derivative of the existing F800. This ‘F900GS’ will surely appear in both GS and Adventure versions, with tougher styling, a higher screen and taller suspension on the Adventure.

The new bike’s appearance also increases the chances that BMW will also be revealing replacements for the naked F800R and the touring-oriented F800ST – which is basically a derivative of the decade-old F800ST that first appeared in 2006. Both of those bikes already use aluminium frames, albeit of a different design. By moving the GS to an alloy beam frame, BMW could ensure that all future derivatives of the bike share exactly the same main chassis parts as well as using the same engine.

From the near-finished appearance of the GS version seen here, we can expect to see it launched at one of the major shows towards the end of this year, with sales starting in early 2018. More derivatives based around the same new engine and chassis are likely to appear over the following couple of years.