Are we looking at the first serious stab at an electric street bike from a major manufacturer? It certainly seems that way as KTM puts a battery-powered Duke through its paces.

While electric bikes from firms like Zero and Victory (nee Brammo) have increasingly shown that the technology to make a battery-driven two-wheeler is improving with leaps and bounds, for many potential buyers the lack of a familiar tank badge –and the manufacturer and dealer back-up it implies – means they’re not even considered. A convincing electric bike from a mainstream bike company could be exactly what the market is waiting for, bringing forward a tipping point at which electrics will be seen as a viable alternative to petrol-powered machines. 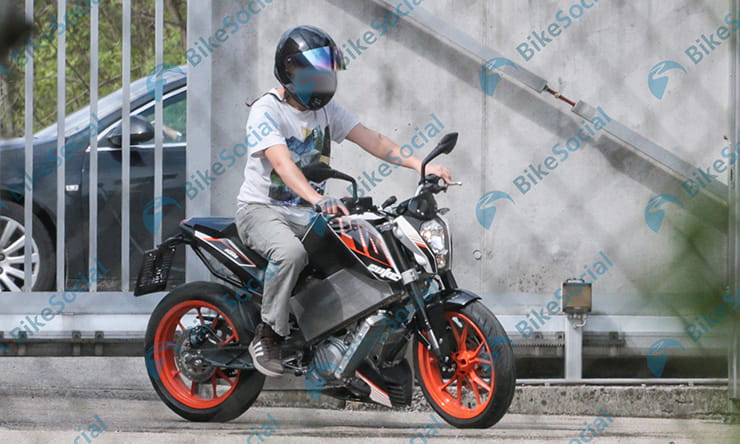 This KTM prototype clearly isn’t production ready, but the electric powertrain bolted to it looks to be more than a lashed-together proof-of-concept. The finished-looking castings and neat integration all point towards something that isn’t a million miles from showrooms.

At a quick glance, you might even think that you’re looking at a petrol-powered bike. Not only does it have a large radiator on the right hand side, suggesting that KTM is using a liquid-cooled motor and perhaps also cooling the batteries with water, but there’s what looks like a very conventional motorcycle transmission. While most electric bikes do without any foot controls, moving the rear brake to the left bar and disposing of gears and a clutch, KTM has clearly opted to stick with something that’s more familiar to most of us. There’s a gear lever on the left, a conventional clutch lever and a rear brake pedal exactly where you’d expect to find in. In fact, all indications are that the transmission is a perfectly conventional motorcycle unit, presumably hiding six ratios inside.

The electric motor sits in front of it, where the normal engine’s crankshaft would be, with its electronic control unit mounted directly above it in an aluminium case that looks much like a conventional cylinder block. That actually addresses another of the usual problems with electric bikes – namely the fact that electric motors aren’t as good to look at as petrol engines. At least this gives a familiar shape.

What’s less familiar is the huge box sitting at an angle above it. Also appearing to be made of aluminium, this is where the batteries hide. Its size suggests they’re big ones, hinting that the bike’s performance and range might be better than we’re used to seeing from electric motorcycles. It appears that the aluminium battery box is doubling as the bike’s main frame, with the electric motor and transmission bolted to its underside and the steering head attached to its front. By making it do double-duty as both battery case and frame, KTM should be offsetting some of the inevitably large weight of the batteries within.

In terms of performance, we can only make guesses based on the rest of kit KTM has bolted to the bike. Much of it, including the bodywork on this mule, comes from the 390 Duke. The firm’s little single donates its forks, wheels, brakes and swingarm as well as the headlight, seat unit and tank covers, which indicates that the electric bike’s performance envelope should be similar to the 390 Duke’s. While the idea of the 390’s 43bhp might not get your heart racing, it’s worth remembering that an electric motor making that much power would be a torque monster at low revs.

The use of the 390’s suspension is also encouraging. While KTM may well have changed the springs, it suggests that the electric machine isn’t an enormous amount heavier than the 390 Duke, which comes in at just 149kg dry. Even if it’s 200kg, the electric KTM would still be light for a battery-powered bike.

It’s worth remembering that KTM isn’t new to the electric game. The firm has made the Freeride-E since 2011. That bike has a 22hp motor, no gears and 30lbft of torque. The new prototype’s motor and transmission is clearly significantly larger and more powerful than that, while its battery looks to be around four times as big as the lithium-ion KTM PowerPack in the Freeride-E.

When will the new electric KTM make its bow? That’s not clear yet. Given KTM’s usual testing and prototyping procedure, we wouldn’t be surprised if it’s shown later this year as a ‘concept’ – just as the forthcoming 790 Duke appeared in concept form at the end of 2016 – with a production variant appearing a year or so later.

When a production version does show up, you can be sure that KTM won’t leave it as a single bike. A naked Duke-E seems a certainty, but it’s also easy to imagine an electric RC sports bike taking on the TT Zero, or even an electric Adventure-E model.

Much of the bike’s eventual success or failure will depend on some key figures. One will be the price; electric bikes so far have been eye-wateringly pricy in comparison to their performance. Since the extra cost is usually far too much to recoup on fuel and tax savings, it means they’re currently bought only by people who particularly want the electric experience and are prepared to pay for it. The second key stat will be range; while most motorcycle journeys are fairly short, we all like to know that we could go much further; KTM will want to at least be able to match a typical tank range for a petrol bike. And finally there’s the question of charging. The latest electric cars are starting to be equipped with fast-charging systems, so you can get at least another half-a-battery’s worth of range with just a few minutes plugged in. That in turn means you need a network of fast chargers. Electric car firm Tesla already has a limited network of such chargers in Europe, but car giants VW, Ford, BMW and Daimler are also planning something similar as a joint venture. If KTM has the foresight to make its electric bike compatible with these chargers, it could eliminate the ‘range anxiety’ that’s one of the biggest stumbling blocks for potential buyers.

There are interesting times ahead for electric bikes.