KTM Freeride E – a silent step towards the future 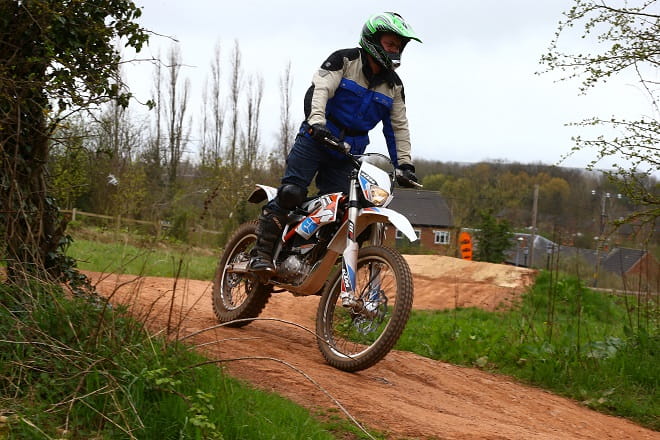 KTM Freeride E – a silent step towards the future

Prepare to have your preconceptions challenged.

Love them or hate them, the chances are that many of us are set to drive or ride electric vehicles at some time in the future. Recognising this, KTM has unleashed battery powered versions of its most excellent Freeride range, taking us one step closer to bringing E-power to the masses.

For the road user, the arguments for electric vehicles mainly focus around the reduction of carbon emissions, but off-road there are a whole bunch of different issues to be faced. Motorsport is perennially under pressure from the NIMBY set, who seem to take a dislike to the glorious brapping of racing motorcycles. What electric off-roaders bring is silent fun, allowing you to wang around in the dirt without disturbing poor Tarquin and Cassandra as they enjoy a spiffing afternoon sipping Pimms on the patio.

Indeed, electric dirt bikes are nothing new. Niche manufacturers have been building them for around a decade and some of the electric kids bikes on the market are nothing short of sensational, but its no surprise that KTM are the first mainstream company to show their hand in this brave new world.

The Austrians are the undoubted kings of the off-road world and therefore have the most to lose if the NIMBYs get their way. With the Freeride E range, they also have the most to gain, as we discovered when we sampled it at Cheshire’s E-Scape, Britain’s first (and so far only) off-road centre for zero emission vehicles. 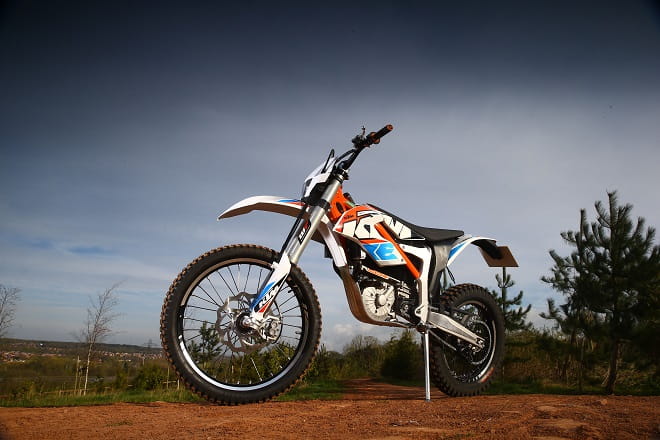 We rode the Freeride range of 250cc two-stroke and 350cc four-stroke models last summer and were bowled over by the performance and playfulness. Built for the casual off-roader, rather than for superhero racers, the Freerides are just insanely good fun to ride. At launch, we were promised the E version, which makes perfect sense, seeing as they are aimed at the leisure, rather than competition, market.

The KTM rides like a twist and go scooter. The throttle and front brake are in the usual places, but the rear brake is operated by the left hand. There are no foot controls. 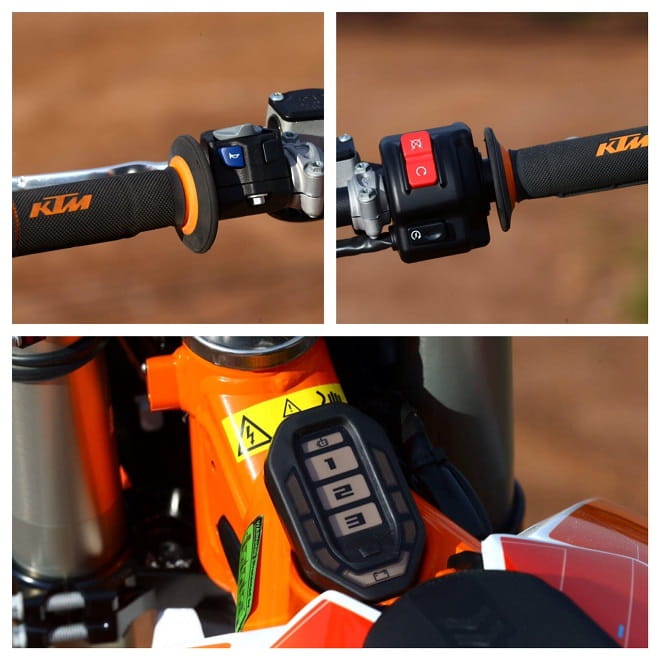 Twist the throttle and the KTM whooshes away on a tsunami of torque.  The Austrians claim similar performance figures to an equivalent 125cc two-stroke, but the way that power is delivered is so, so different – and pleasantly so. The 42Nm maximum torque comes in immediately and there’s no gearbox to worry about. KTM claim that they are aiming the Freerides at a new type of customer, ones who have not had and perhaps have never considered a motorcycle, and they will be pleasantly surprised. This bike is big, big fun.

At 110kg, it’s a good 15kg heavier than the 250cc two-stroke, but it feels really light and agile nonetheless. Chassis-wise, the Freeride E takes its forks and swingarm from the 85SX youth machines, while springs are stiffer than the petrol models in light of the added weight caused by the battery. All together, it handles beautifully and the lack of gearbox and clutch makes it less tiring to ride over distances. 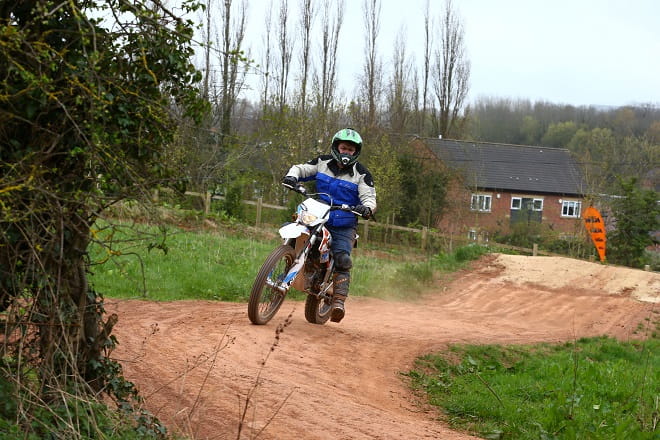 During our day at E-Scape, we rode two different versions of the Freeride E – the E-SX and E-XC. Fundamentally they are the same bike. The E-SX is the stripped down ‘motocross’ variant while the E-XC adds lights, horn and a slither of an instrument panel to create an endure or ‘cross country’ version. The upshot is that the E-XC weighs 4kg more but can be road registered. KTM admit that they are not road bikes, but many owners are likely to choose the E-XC in order to be able to legally do a bit of greenlaning. If you do register your E-XC, you’ll have an A1 compliant vehicle with a top speed of around 45mph.

A third version of the Freeride E is due out imminently. The E-SM is, you’ve guessed it, the supermoto variant. We have yet to ride this, but essentially what we have is the E-XC with revised gearing and sticky Dunlop tyres.

The heart of the Freeride E range is a 12v li-on battery manufactured by Samsung.

The big worry with an electric motor is, of course, what happens if water interacts with the 300 volts under your backside. With that in mind, the battery is sealed and features moisture sensors that will shut it down in case of water ingress. KTM claim that it is splash proof but do not recommend jet washing or riding in deep rivers. The bad news is that any work on the electric motor requires specialist attention, so water in the works means an expensive trip to the dealer.

In truth, it’s highly unlikely to be a problem for most Freeride E riders. The motor is rated at 11Kw, although the vagaries of measuring electric outputs means that it’s more like 16Kw in the real world. Torque is an insane 42Nm and is delivered instantly, eliminating the need for a traditional gearbox, which KTM acknowledge would have added weight and complexity to the design.

The battery weighs a not insignificant 27kg and can be changed in a matter of minutes, if you have a spare. It takes 90 minutes to fully charge the battery from the mains, while 50 minutes gives a 90% charge. KTM claim that the battery should last five years and 700 charges, suggesting that the performance will drop to around 80% after 700 charging cycles. 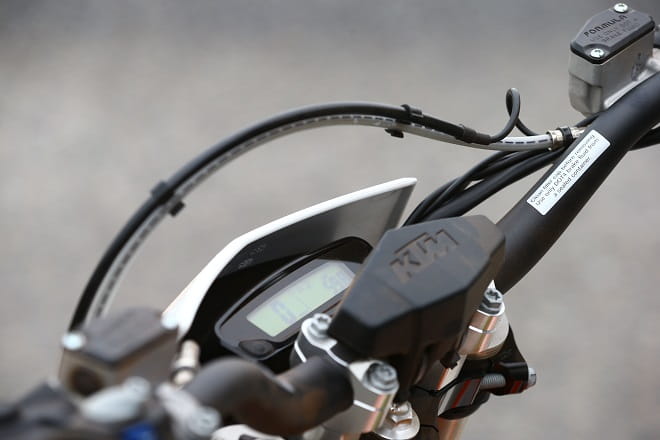 For road use, E-technology hasn’t quite yet developed enough, especially for motorcycles, but you do get the feeling that KTM is almost-but-not-quite there yet. Batteries are still lacking the usable range required for most applications, despite still being heavy and expensive, but even luddites like me know that its only a matter of time before electric bikes become more and more commonplace. Scooters, commuters and even superbikes from companies like Italy’s Energica are publicly available, and don’t forget that TT legend John McGuiness can gun the Honda’s ultra-exotic (and super expensive) Shinden racer around the Mountain course at over 117mph. And you can sure as heck bet that there’s a very good reason why the Japanese giants are spending millions developing what McGuiness ranks as by far and away the trickest bike he’s ever ridden. History suggests that batteries will become lighter, more powerful and significantly cheaper, making electric two-wheelers more and more viable, with bikes like the TT Zero contenders being rolling test beds for new technology.

Talk of batteries and the subject of range has to come up. The Freeride E has three power modes. On full power mode, an expert rider is likely to run out of juice in less than 30 minutes. In the middle setting, which I used most of the time and found to be more than adequate, that rises to 45 minutes, while the third (power saving) option might see the battery life extended to almost an hour. That third mode becomes the default when the battery drops to below 20%, and the mode and battery life can be easily read on a panel where the fuel filler would be on a traditional petrol bike. 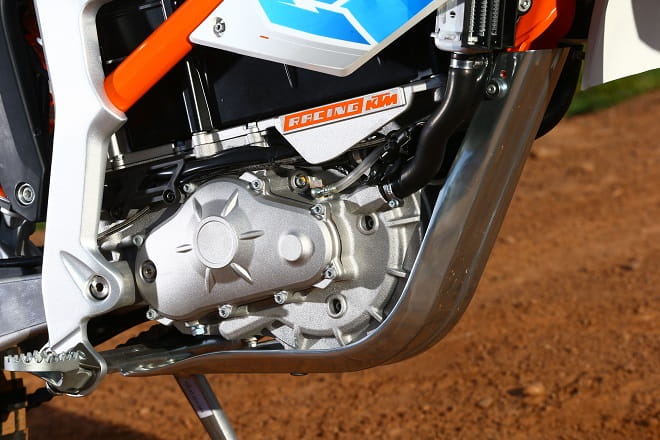 Taken in isolation, the Freeride E is a marvelous thing. I loved riding it and indeed, in many ways it is better than the petrol equivalent, but in many ways its much much worse. The torque is unbelievable and it’s just so sweet to ride. But the downside is the price tag, and that’s a big downside.

The E-SX comes in at a pound under 10 grand, with the E-XC weighing in at a further £300. That’s a lot of money for a plaything, but the good thing is that those who do buy one will be getting something of real quality. At £10,599, the E-SM will be the top of the range when it is introduced this summer. To but it all into context, prices for the petrol Freerides start at £5,999.

The (lack of) range is also still a big black mark on an otherwise excellent package, and it would certainly bother me if I wanted to do a bit of green laning. Spare batteries can be bought, but weigh in at £2,900 each. Ouch!

KTM admit that electric vehicles are never going to be big sellers in the short to medium future, but they are the first of the main players in the marketplace and don’t be surprised to see some electric kids bikes in the not too distant future.

The truth is that the Freeride E is not really comparable to the petrol Freerides in so many ways. KTM has built a really rather clever thing with the electric version. The price and general cynicism towards electric motorcycles mean that it is unlikely to be a common sight on either road or track, but it does play an important role in the inevitable evolution of the battery powered two-wheeler, which will no doubt see the day when we can ride from London to Edinburgh powered by little more than a pair of jumped up Duracells.

On the plus side: