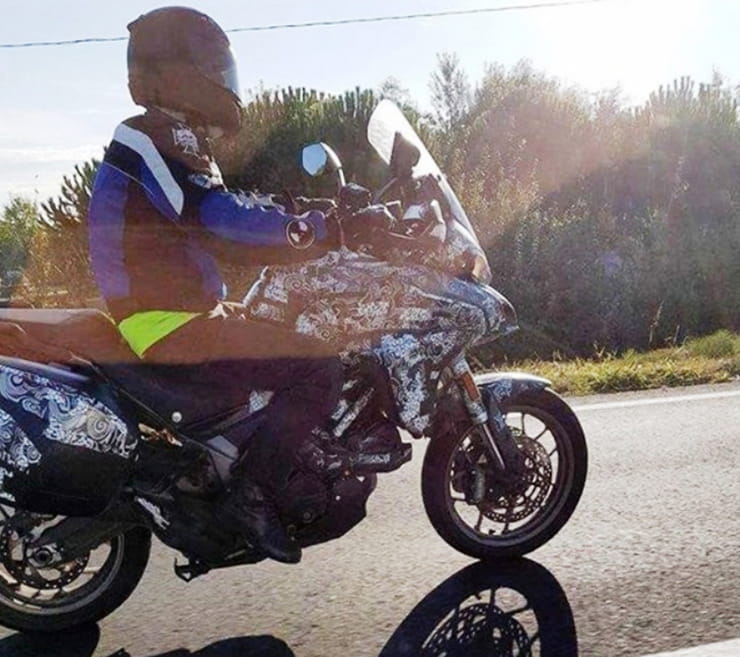 Another variation on the Multistrada theme is set to join the Ducati range and this spy shot suggests it’s a smaller-capacity bike with road-oriented touring ambitions.

While the picture isn’t the clearest spy shot we’ve ever seen, the black and white camouflage wrap leaves no doubt it’s a prototype and close inspection reveals that the bike doesn’t match anything in the current Ducati range.

Individual elements are taken from a selection of different models, suggesting this is more of a mix-and-match parts bin special than a clean-sheet design. However, the result plugs a couple of notable gaps in the firm’s range.

The front bodywork appears to be stock Multistrada, including the same beak, lights and side panels. However, the forks look like the units used on the Multistrada Enduro, while the front wheel is from the Hyperstrada 939.

Moving back, the engine is hard to see clearly but the shapes of the cam belt shrouds and the clutch cover appear to match the Euro4-emissions-ready, 937cc V-twin of the Hyperstrada/Hypermotard 939. The same motor is also to be used in the new Supersport 939 next year and is also expected to appear in a new Monster model to replace the Monster 821. Its performance, with 113bhp, puts it in a lower league than the 160bhp Multistrada 1200 with its complex variable-valve-timing V-twin. But 113bhp is still more than enough for most riders – early Ducati 916s were around that level – and certainly won’t detract from the bike’s touring potential.

The rear end of the bike appears to be largely the same as the Multistrada Enduro, complete with a dual-sided swingarm and the Enduro’s thicker, comfier seat design. Its exhaust also looks like the Enduro’s. It’s tucked up behind a pannier that’s much sleeker than the aluminium boxes of the off-road-capable Enduro, though, and this prototype’s 17-inch alloy wheels appear to give it no pretensions to off-tarmac ability.

So while it’s a pick-and-mix from the Ducati corporate parts bin, the result is a touring-oriented Ducati with much more comfort and long-distance ability than the Hyperstrada or even the normal Multistrada. A mid-powered engine suggests it’s aimed at riders with a mind to practicality rather than bar room bragging, and by using off-the-shelf bits instead of investing too heavily in R&D Ducati should be able to keep the cost down, too.

If you like your Ducatis to be attention-grabbing examples of style-over-substance or jaw-dropping performance, this might not be the bike for you. But as a real-world machine for the sort of rider who has only one all-rounder in his garage, it could be the most convincing argument in years to buy Italian.

Although Ducati is expected to reveal some new models at the Intermot show in Cologne next month, the majority of its 2017 machines will be unveiled closer to home at November’s EICMA show in Milan. That’s where we might find out more about this bike.

The photograph was taken by a reader of Italian website moto.it